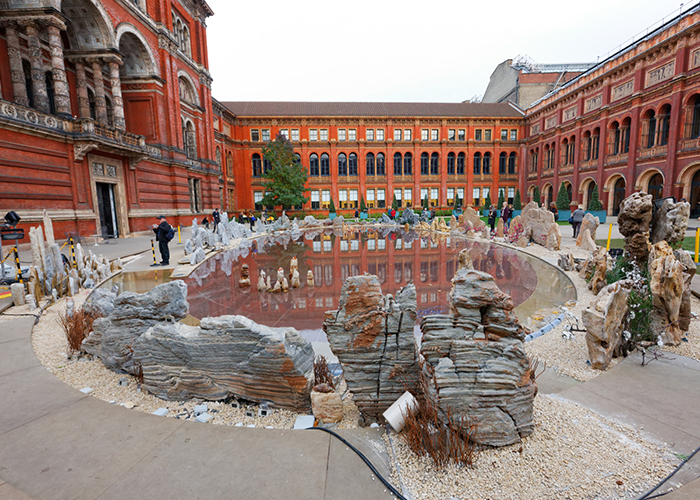 On November 2nd, 2013, Xu Bing, renowned contemporary artist and Vice President of China Central Academy of Fine Arts (CAFA), hosted his most recent exhibition Travelling to the Utopian Village at the John Madejski Garden of Victoria and Albert Museum (V&A) in London. Xu showed up at the press conference and VIP preview on November 1st to talk about his creative concept. Major international media companies including BBC, The Times, The Guardian, Press Association, Evening Standard, Wallpaper attended the conference as well.

With joint efforts from Xu Bing’s studio and Jing & Kai, for a period of nearly 20 days of installation, one of Xu Bing most challenging installation works – Travelling to the Utopian Village – at the John Madejski Garden of V&A was finally completed. In this exhibition, Xu Bing has carted slices of nine different rocks from five different places in China and arranged them here to create a magical miniature mountainscape, dotted here and there with tiny ceramic houses, and surrounding the garden’s water feature that becomes a huge, and at some times of the day, mist-shrouded lake. As Xu says, he has played with scale here in a disarming way and the installation is somewhere between rockery and monumental land art, a genuine landscape but far more mysterious than any model village you have seen. Modern elements such as small LCD screens with cartoon animations have also been introduced into the landscape to represent the co-existence of ancient and modern in contemporary China, and present everyday life. Lighting and mist also change the atmosphere of the installation depending on the time of day. The modelling of ceramic houses in the work has been cast into “the shapes of a rhombus”, organically integrated into a “two-and-a-half-dimensional” concept. The styles and colors of the ceramic houses are not arbitrary, instead they are arranged with the landscape refinement and built with stones, such as Taihu stones from the south of the lower reaches of the Yangtze river in China are matched with Suzhou garden-style houses; similarly, the plants and ceramic animals are included too.

The V&A Museum in London is the world’s greatest museum of art and design. It attracts worldwide attention for its historical architecture and enormous collection. Officially opened by Queen Victoria in 1857, the V&A Museum has a central garden redesigned by Kim Wilkie and opened as the John Madejski Garden in 2005 among its redbrick architecture, and this garden with a pond of blue water has become Xu Bing’s “Utopian Village”. The installation work attracted many viewers on the opening day, among which two British students were doing sketches onsite. This piece especially appeals to children because “children are closest to Utopian ideas,” Xu Bing observed. This work is also related to his earlier “Mustard Seed Garden Landscape Scroll”, “Background Story”, and his early woodblock prints series from the 80’s in their reclusive aspiration of a harmonious realm between Man and Nature in ancient Chinese literati.

To complement Travelling to the Utopian Village, the V&A will present a display of works on paper by Xu Bing in the T.T. Tsui Gallery. This will include one of his large-scale “New English Calligraphy” pieces, based on Tao Qian’s historical writing on Tao Hua Yuan, shown for the first time at the V&A. In addition, there will be albums of paintings representing Xu Bing’s vision of Tao Hua Yuan and sketches that show the process of creating the garden installation. “In today’s world, human beings no matter where they live, seem very difficult to find an ideal place to live, almost everyone is dissatisfied with their living circumstance. Contemporary people particularly aspire to a natural, equal and harmonious life without any political induction,” said Xu Bing.