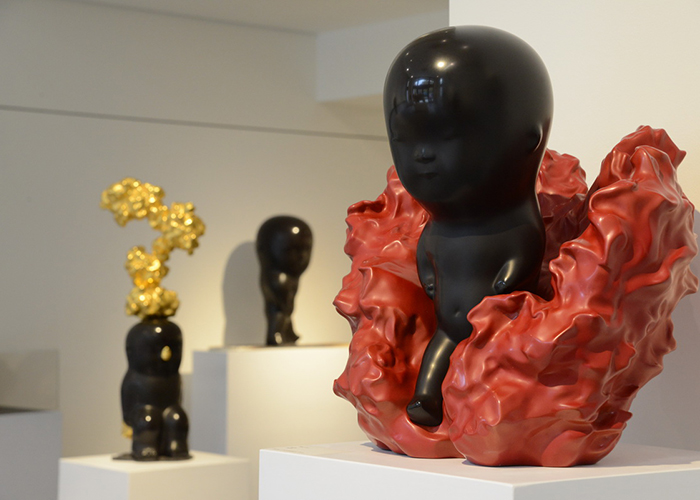 In view of the rise of Chinese in the 21st Century, Discovery Channel, one of the most informative and widely distributed cable channels, gathered some of the most internationally recognized Chinese artists to produce Chineseness, a four-part documentary series. Li Chen is among the 4 artists featured in the Chineseness. The Discovery crew filmed in Paris, Venice, Beijing, and Taichung to unveil the artistic path and development of his sculpture that blends in Eastern philosophy and Western aesthetics. To bring the viewer even closer to the core of Li Chen’s works of art, starting Dec. 28th, 2013, Chineseness – A Documentary Exhibition on Li Chen at Asia Art Center Ⅱ showcases the artist’s original sketches and recent works, uncovering the creative source of his unique expression.

The opening of the exhibition was on Dec, 28th, just a day before the premiere of Chineseness: Li Chen on Discovery Channel; it drew more than a hundred collectors and art lovers to attend the event to watch first-hand the preview clip and Li Chen’s new works. Besides “Human Nature” and “Mood Swing”, which are being documented in the Discovery program, this exhibition also features dozens of new works from Spiritual Journey Through the Great Ether, Ethereal Cloud, Ordinary People, and Immortality of Fate: Living Soul series. Furthermore, the artist’s original sketches, structural layouts, tools, and clay models are being exquisitely displayed, as if exposing treasures from an archaeological site, and from which Li Chen’s creative energy is fully captured. This exhibition also includes inspiring photos by Wu Yushan, Li Chen’s close friend for over 30 years who is also an amateur photographer; he has been working side by side with the artist to document his creative journey.

While the exhibition examines Li Chen’s artistic source of his “monumental levity” sculpture, it also highlights the other facet of Li Chen’s style of art – a departure from spiritual to societal concerns. For example, “Peony” from Spiritual Journey Through the Great Ether uses flower to symbolize the beauty of women. For Li Chen, the birth of human is another natural part of the cycle of life – pure and unadulterated. “Mood Swing” from Ethereal Cloud attempts to capture the transient emotions, echoing Marcel Duchamp’s (1887-1968) “Nude Descending a Staircase”. On the other hand, Ordinary People and The Immortality of Fate: Living Soul series implies rough, crackled surface and exaggerated imagery to represent a mixed emotion towards problems existed in humanity and society.

Li Chen’s concern towards reality has already been reflected on his earlier work Butterfly Kingdom of 1999. From his innovative concept and technique, one sees an artist who continues to break creative boundaries in order to communicate his feelings and ideas. A collector remarked: “I am fascinated by the presentation of Chineseness – A Documentary Exhibition on Li Chen, it has made me see another side of Li Chen.” This comprehensive documentary exhibition is highly-praised by art lovers for its retrospective narrative form. Chineseness – A Documentary Exhibition on Li Chen spans from Dec. 28th, 2013, to Jan. 26th, 2014. We cordially invite you to experience the enchantment of his creations at Asia Art Center Taipei II in Dazhi, Taipei (No. 93, Lequn 2nd Rd.).