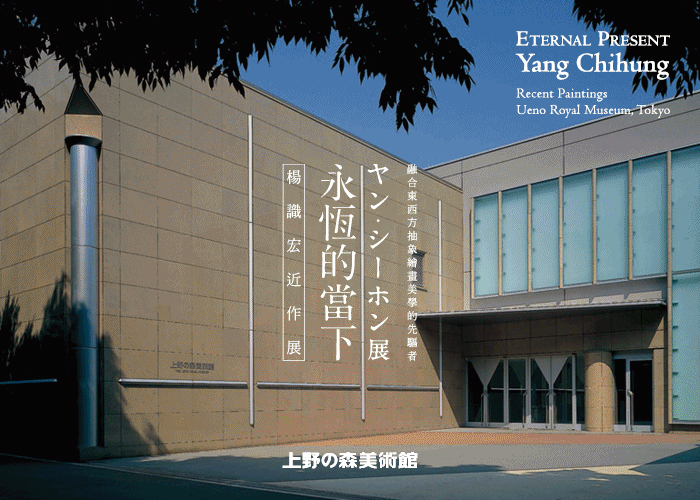 Yang Chihung’s artistic creation encompasses writing, painting, and photography, while the idea remains attached to contemplation about life and the passing of time. Concerning his path of development, Yang immigrated to the United States during the prime of his time to study Western art, and then came back to Asia with deep learning of two distinct cultures. Yang’s art is thus nurtured by his everyday experience, from outward extravagance expression to inner melodic stream of consciousness, his artistic style can be categorized into 6 periods: The Representation of the Self (1960-1975), Era of Reproduction (1976-1980), Exploration of Civilization and Archaeology (1981-1988), Botanical Aesthetics (1989-1997), Organic Abstract Expression (1998-2010), and the Eastern Poetics (2011-). The 42 works exhibited of Eternal Present at the Ueno Royal Museum includes some of the master works from the Eastern Poetics period.

Passing his 60s, Yang has reached a harmonious state towards life’s ups and downs, however his faith in art endures: “Art transcends death, we don’t.” Lives, and death, form an interlaced network for Yang to conceive the idea of eternity. His work incorporates Eastern aesthetics and Western abstraction, delivering self-representation through mastery of technique in form and color using. The exhibited work “Legend” (2013-14) attempts to reenact the glorious past, the triptych each represents the cycle of past-present-future, to reflect the artist’s observation that things eventually revolves and returns: hot and cold, darkness and light, love and hate, all become one.

Other exhibited work such as “Spring Thunder” (2015) was created during the spring of New York to depict the power of nature where “on this day, all the insects are frightened by the spring thunder and rush out from their caves…” as lighting in the middle of painting cuts asunder a lifeless winter. “Mystical Uproar” (2013) was inspires by the opening caption of movie The Enigma of Kaspar Hauser (1974): “Do you not then hear this horrible scream all around you that people usually call silence.” Yang is especially sensitive to the subtle changes of nature, as he created the “First Day of Autumn” (2014) literally on the first of the season as cool breeze touched his skin. In February, 2014, there was a rumor that an epic blizzard was going to hit New York, thus conceived “Blizzard Forecast” (2015), the black and white colors arbitrarily sweep across canvas, while the blue decorates as frost cracks on window. Is it anxious, or anticipation of the unfathomable storm?

Masakaru Mizun, Director of Ueno Royal Museum, points out how Yang Chihung’s “Eastern Poetics” is significant in offering painting a breakthrough on the level of mutual integration of two different cultures: “From his figurative style seen in his early Representation of Self works, to that of discussions with nature and inspired by the plant world, leading to the Eastern philosophy and culture that inhibit his works seen today, Yang Chihung’s expressive style has continued develop, evolve, and break new ground. He utilizes the unique characteristics of acrylic paint to its full extent, and has perfected his magnificent brush strokes and original use of color. His pure abstract paintings, reminiscent of Chinese ink paintings, search for the answer to the “meaning of human existence.”.

Japan absorbed Chinese culture and one step ahead in opening up to Western art after World War II, thus became the land for eager artists to learn about the international art trend, the young Yang Chihung, was among them and through which, was determined to forge a career in the West. After 40 years, Yang came back, holding his first solo exhibition in Ueno Royal Museum as a matured and respected artist, he has indeed put his journey into a poem of “New” spirit of the East!