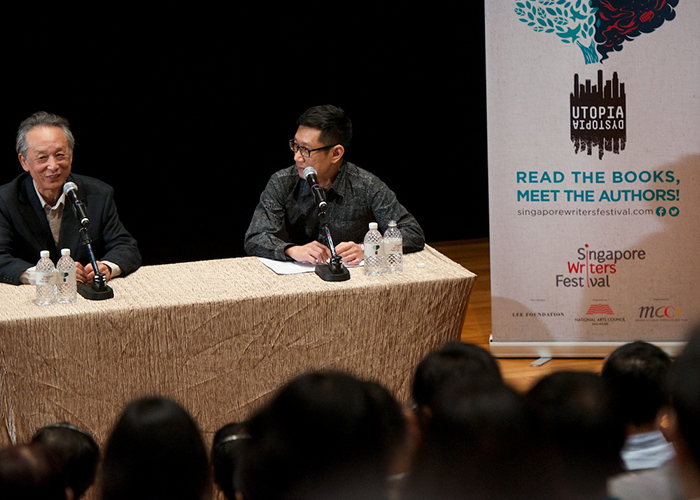 The Singapore Writers Festival is one of Asia’s premier literary events. Inaugurated in 1986, the festival serves a dual function of promoting new and emerging Singaporean and Asian writing to an international audience, as well as presenting the world’s major literary talents to Singaporeans. The theme of this year’s festival is Utopia/Dystopia. Chinese Nobel laureate Gao Xingjian was one of the speakers invited to participate. Gao discussed “Literature and Aesthetics” and launched his film “Requiem for Beauty” at the Singapore Writers Festival.
On November 8th, Gao Xingjian talked about “Literature and Aesthetics” with Quah Sy Ren, associate professor of Nanyang Technological University, Division of Chinese. Addressing a 220-strong audience who packed the museum’s Gallery Theatre, Gao Xingjian, the self-described “citizen of the world, said that for him, writing the same text in two languages amounted to “re-creation” .
This was because one had to be extremely sensitive to “not just the syntax but the deeper linguistic structures”. It involved “translating from one culture to another, so that it resonates with someone of that other culture”.
Gao also pointed out, “globalization” as a social phenomenon is unstoppable and there’s no point in judging its existence, as futile as it is to insist on making “literature as a weapon to change the society.” He explained that ideologies under past political regimes held no long her significant value today.
Although writers cannot change the world, Gao believes that they should maintain their integrity, to witness and to reflect our time through expressions in accordance with aesthetic view.

World Premiere of “Requiem for Beauty”
That evening was also the world premiere of Gao’s third film, Requiem For Beauty, a two-hour “cinematic poem” – as he describes it – on artistic creation.
Shot mainly in his studio in Paris, it incorporates video footage of his travels – from the neon- lit streets of Tokyo to the coasts of Ireland – and poetry in three languages: French, Chinese and English. Gao wrote in the first two languages and got a friend to do the English translation, and a total of 38 actors were involved in Requiem For Beauty, they include stage actors, dancers and non-professional actors like his wife Celine.
As director, Gao was involved at every stage of the film-making process, from conception to editing. About 3,000 hours of footage were shot, to be whittled down to two hours, he tells you wryly.
One challenge was that he did not want the actors in Requiem For Beauty to give naturalistic performances, but to be blatantly arty and theatrical, “so that every shot can be like the composition of a painting”.
“Every film is an experiment, everyone is riddled with problems. But after we finish, everyone is very happy watching the final film,” he concludes with a laugh.
Singapore Writers Festival 2013
This year’s theme is “Utopia/Dystopia” that seeks to explore broad issues ranging from war and peace to love and hate.
Utopia and Dystopia are genres of literature that explore social and political structures. Utopian fiction is the creation of an ideal society, or utopia, as the setting for a novel. Dystopian fiction (sometimes referred to as apocalyptic literature) is the opposite: creation of an utterly horrible or degraded society that is generally headed to an irreversible oblivion, or dystopia.
A total of about 190 internationally renowned writers participated in the festival, including Scottish poet and playwright Carol Ann Duffy, and English philosopher AC Grayling.