Our artists are exhibiting at “FROM CHINA TO TAIWAN. Pioneers of abstraction (1955-1985)” at the Museum of Ixelles in Brussels, Belgium. The curator Sabine Vazieux, a member of “the European Alliance of Experts”, pays great reverence for these pioneers of abstraction. The exhibition traces the origins and evolution of Chinese abstract painting. In 1949, many Chinese left the continent to settle in Taiwan. In this new world, artists broke away from tradition to find inspiration in Western art. At a crossroads between East and West, they created a new form of abstraction without equivalence. The curator presents 15 representative artists of Chinese descent with work created between 1955 and 1985 in hopes of promoting the history that is rarely known by the Western world.

The exhibition “FROM CHINA TO TAIWAN. Pioneers of abstraction (1955-1985)” is organized by the Museum of Ixelles, co-organized by Taiwan’s Ministry of Culture, Cultural Center of Taiwan in Paris. Several pieces of art are borrowed from National Taiwan Museum of Fine Arts. 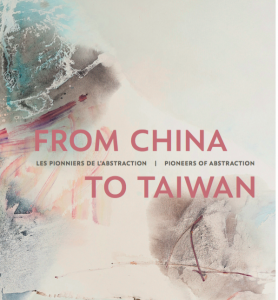 Available on www.racine.be and at the Museum of Ixelles.

About the Museum
The Museum of Ixelles was founded in 1892 as a result of a significant donation of artwork made by the painter and collector Edmond De Pratere (1826-1888). Its collections include various realist works, impressionist, luminist, neo-impressionist and symbolist, as well as other artists inspired by fauvism, expressionism, cubism, surrealism and abstraction. In recent years, to promote contemporary art with special exhibitions, the museum has held the exhibitions of Zao Wouki and the Nobel Prize winner Gao Xingjian, and is committed to the exchange of the East and the West. Its “FROM CHINA TO TAIWAN. Pioneers of Abstraction (1955-1985)” group exhibition makes it the first Western museum to explore the origins and evolution of Chinese abstract painting.