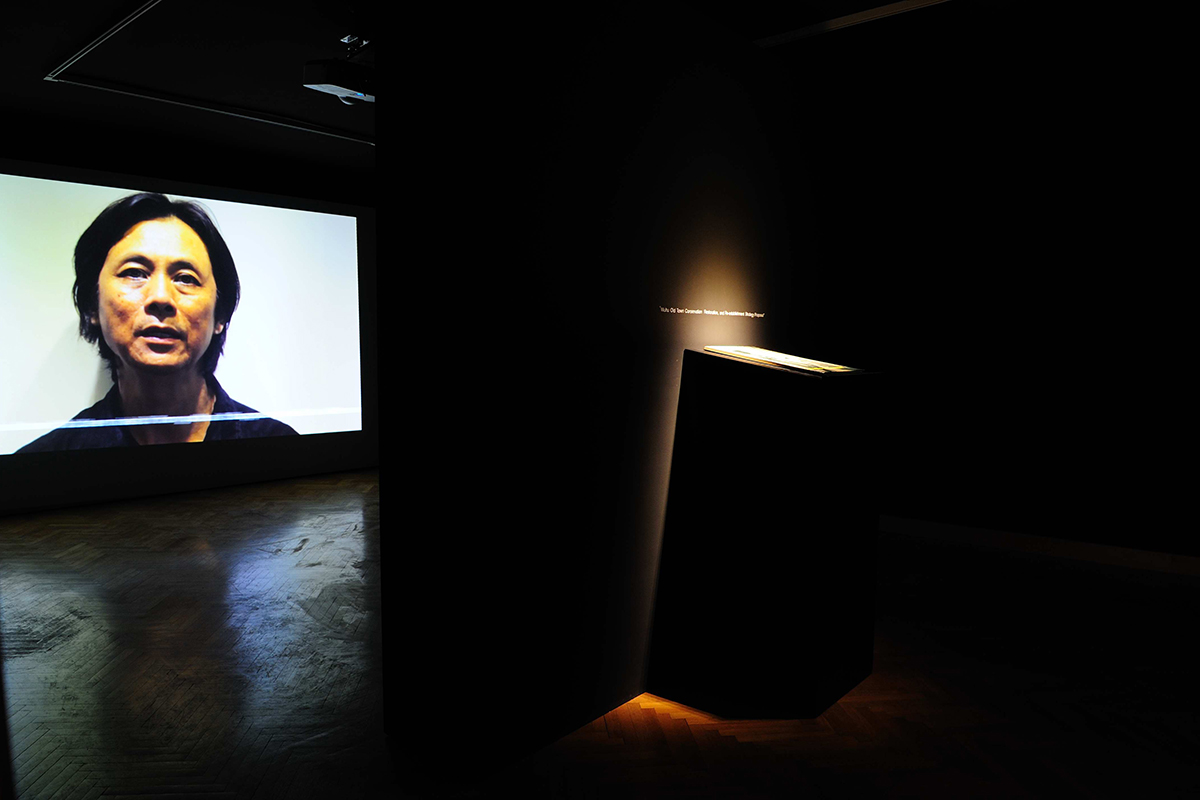 Walking out of Xidi village, Ying Tianqi opened up his view. From printmaking, material painting to large-scale installation, what he cared has risen from villages and architectures to humanistic culture, thus creating a grander theme: Traces of Centuries and Mourning over Ruins. Whether by material painting, installation or performance art, he has showed us the assiduous seek of art by an artist and his sense of social responsibility.

Traces of Centuries and Future Steps showsan artist’s concern over architecture and humanity, and a broader reflection on life. The theme of this exhibitionMourning Over the Ruins is based on Ying Tianqi’s long-term attention to ruins culture: the sustained economic growth at the start of the new century has brought along accelerated urbanization, and China has become the world’s largest scene of site demolition and redevelopment, with ourformerhomes become ruins because of the construction of innumerable tall buildings. Modern construction, while bringing us conveniences, is ruining some of our memories in the meantime. The damage of former urban environment, architecture forms and life style brings us cultural ruins. The familiar city in the past has become alien in a short time, and the neighborhood of our youths has disappeared, leaving only historical memory in the appeal of literati, regrets of citizens and works of the artist. Peng Feng as the curator of the exhibition has a humorous and heavy explanation of the situation: ’Ying Tianqi had previously tried to work for the conservation of the Wuhu Old City remnants, but because of the onslaught of the pressures of reality, the artistic ideal was unable to be realized. Thus it was that an old city with a rich continuous history and remarkable cultural contributions has become irretrievably lost ruins and debris. The debris of the ruins of the Old City of Wuhu, have become analogous to the ruins across today’s China, which have not been left as the imprints of a war, nor resultant from natural disasters, but rather are the remnants of an ignorant and corrupt bureaucracy. There was no war, but the results are reminiscent of wars; nor natural disasters, but with losses exceeding natural disasters. As the Chinese economy is rising, Chinese culture and the ecological environment have been surrendered along the way. This kind of wartime loss during peacetime represents for a self-conscious artist such as Ying Tianqi, an unbearable circumstance in his life. Teary  Wallis Ying’s brand new material painting work in 2013, from whose name we can sense the sorrowful mourning of and concern over Chinese culture, showing us once more the oriental aesthetic experience and spirit.

Brick Soul, the large-scale installation standing in the center of the exhibition, is made of powder of brick remnants collected from the ruins in the old city Wuhu. The creation of this work was inspired by a piece of ancient brick, which was an brick remnant from an ancient building given to Ying by an old man and was proved to be the last ancient brick with Chinese character for Xidi Shrine of Virtue and Piety engraved on it. Feeling greatly regretful of the lost culture, the artist reproduced it in a massive form and created the piece of work we see today. It is astonishingly massive and makes viewers to think: it is not just the ruins that have been crushed, but also the memory of youths of the author and that of a few generations; and it is not just the buildings that have been taken down, but also the ancient culture and tradition of this place. This bitter reflection, whether in the heart of the artist or the spectators, will surely add weight.

Another work Imprisoned is ruins purely presented: a massive, city-like iron cage in which many abandoned living articles are put, like desk, sofa, windows and doors, and most importantly a video of the old life style in the old city Wuhu, Anhui, Ying Tianqi’s hometown, carrying the meaning “poetic life imprisoned by steel and concrete”, a portrayal of contemporary society in China. Confrontation of such culture ruins and ruins culture make Ying Tianqi’s work more real and deep about the current difficult position China’s contemporary culture is in. Whether in the printmaking Xidi Village or oil paintings Traces of Centuries, or the Wuhu Old Town Reconstruction Project, or capturing the daily lives of the original inhabitants, he always challenges us to consider: who are we? Where have we come from? Where are we now? Where are our memories, desires and aspirations leading us? And he provided his answers to these questions in the series of works in the exhibition of the 13th Venice International Architecture Biennale Returns to China.

As early as in 1920s and 1930s, architects Liang Sicheng and Lin Huiyin have paid attention to the topic of urban development and culture preservation, and participated in urban development and planning. Ying Tianqi, as an artist, has the same sense of responsibility. Because of the influence of Xidi Village series, Xidi village has become one of world culture heritages, and the art activity of Dialogue with Guanlan has aroused protection of the Guanlan ruins in Shenzhen and Hakka round house. As an artist of the same age with the new China, Ying has witnessed the development and changes of China, and the traces of time have been engraved in his works. He put all his real experiences in his works and aroused people’s reflection. How to treat our culture heritage is apparently a question for us to think raised by the artist through his works.