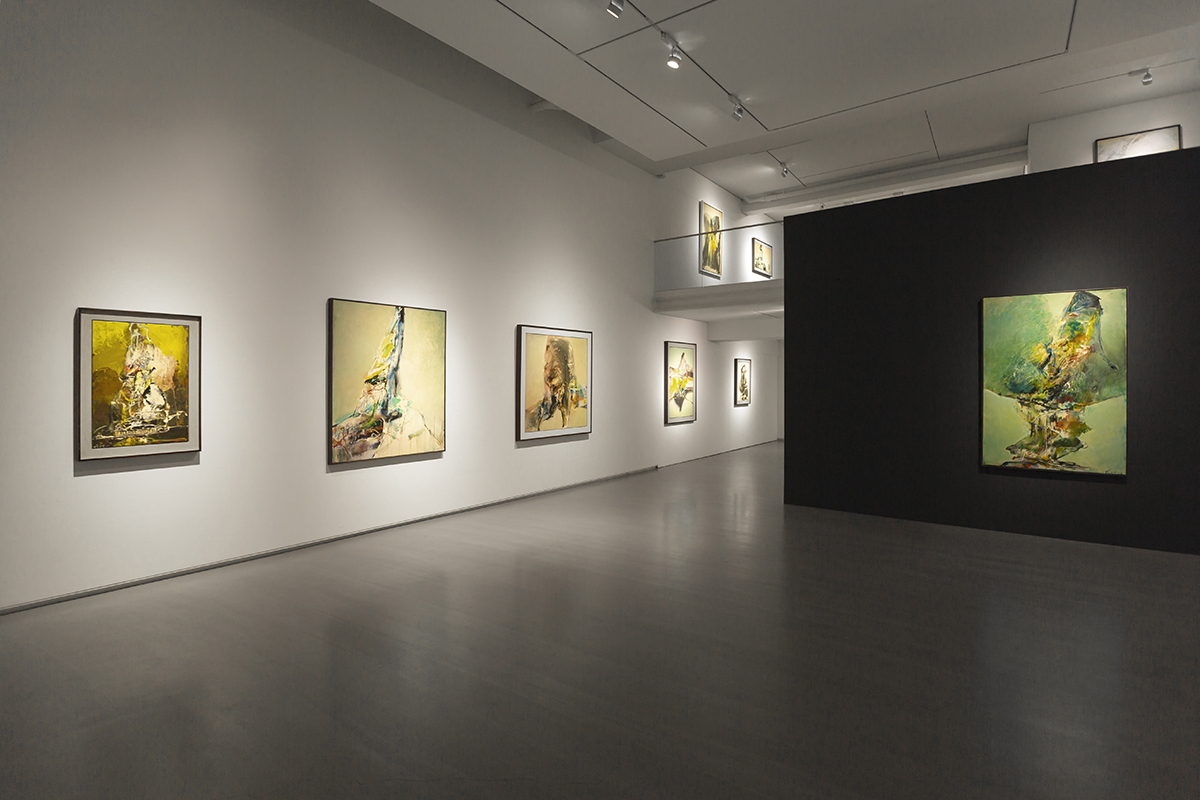 Chuang Che Anniversary Solo Exhibition: As Lofty as a Mountain 1960-2019

The name of the exhibition Chuang Che Anniversary Solo Exhibition: As Lofty as a Mountain 1960-2019 is based on a work created by the artist in 1960 titled As Lofty as a Mountain. In addition to this piece representing the beginning of Chuang’s abstract mountain series “Mountain Imaginings,” it also marks the start of his embrace of abstract art. This exhibition shows 14 paintings, seven of which come from the artist’s “Mountain Imaginings” series and six pieces from the series are selected by Chuang himself. Moreover, each painting represents one of the six decades in which he has been painting: The Beginning (1962), The Shadow (1979), Dewy Mountain (1987), Spring Way (1991), Deep (2001) and Awakening (2019). In addition, to these paintings echoing and being connected to As Lofty as a Mountain, an effort has also been made to guide viewers from reflections about “mountains” to a more in depth exploration of the context and meaning that informs the abstract paintings of Chuang Che.

For Chuang, mountains represent both a life experience and a vehicle for the dialectic of painting consciousness. At important points in his life, Chuang’s growth has been inseparable from “landscapes,” including the many places he has lived. Moreover, because his father was Chuang Yen (former deputy director of the National Palace Museum), as a young boy the artist came into contact with renowned landscape paintings by ancient Chinese artists, including many he continues to revere: Shi Tao (1642-1707), Bada Shanren (1626-1705), Xu Wei (1521-1593), Chen Hongshou (1598-1652). In the later paintings of Chuang Che, mountains became an eastern cultural symbol and a source of creative inspiration. In 1958, after graduating from the Department of Art at National Taiwan Normal University, Chuang joined the Fifth Moon Group and the 4th Fifth Moon Art Exhibition in 1960 was the first time he showed abstract works. However, Chuang’s art in this period was very much in a state of “self examination” wherein he reflected on the contradictions and compatibility inherent in the collision of Chinese painting and Western ideas. It was in this decade that the artist immersed himself in these difficulties in an attempt to reconstruct the definition of Chinese painting through media and painting tools. He observed:

“We have to acknowledge that in the past Chinese painting focused on landscapes, so subconsciously I already had the idea of re-expressing landscapes.”

Mist, which was painted in 1977, marks a turning point for Chuang Che and a new freedom that left his previous ruminations behind. At this point, his abstract painting started to use oils and acrylic, while also incorporating calligraphy as showcased in the power of brushwork, a notable departure from the 1960s when he incorporated words into paintings, blended with collage methods and ink. Through the process of using this medium, Chuang became more aware of the ever changeable grains of color and texture that can reflect a sense of flowing air and used these to delineate a more precise meaning for the terms “abstract” and “landscape.” The other works in the exhibition Landscape 10 (1972), LANDSCAPE 77-8 (1977), Abstract (1989), Clear Water and Greenwood (1989), Rainfall Behind the Mountain (1993), and Ten Thousand Beams of Sunset (2007) show that he seeks to convey the “truth” of nature detached from the human world and return to the beginnings of painting. On this abstract foundation, the artist uses the construction of his paintings to simultaneously showcase the spirit of painting and nature, extending from external nature to the fundamental essence of nature. This ethereal turn highlights the high spirits of being boldly unconstrained and upbeat, while the cadence and rhythm that accompanies the unbridled indulgence of color and the ecstatic state underscore the wisdom of the artist Chuang.

As we review Chuang Che’s career as an artist, we can see his evolution from the 1960s when he embraced avant-garde ideas and painting style to become a mainstream figure in the art world at a time of great upheaval, to his role as a leading figure in the Taiwanese modern painting movement as it transformed in terms of materials and conceptual approach. Chuang has, for many years, explored painting and abstraction and consistently sought to capture the essence of Chinese landscape painting, or the truth of eastern painting spirit, through abstract expressionist methods. This highlights the extent to which the works of Chuang Che, an artist informed equally by academia and painting, transcend the time and space in which they are created.

As Lofty as a Mountain 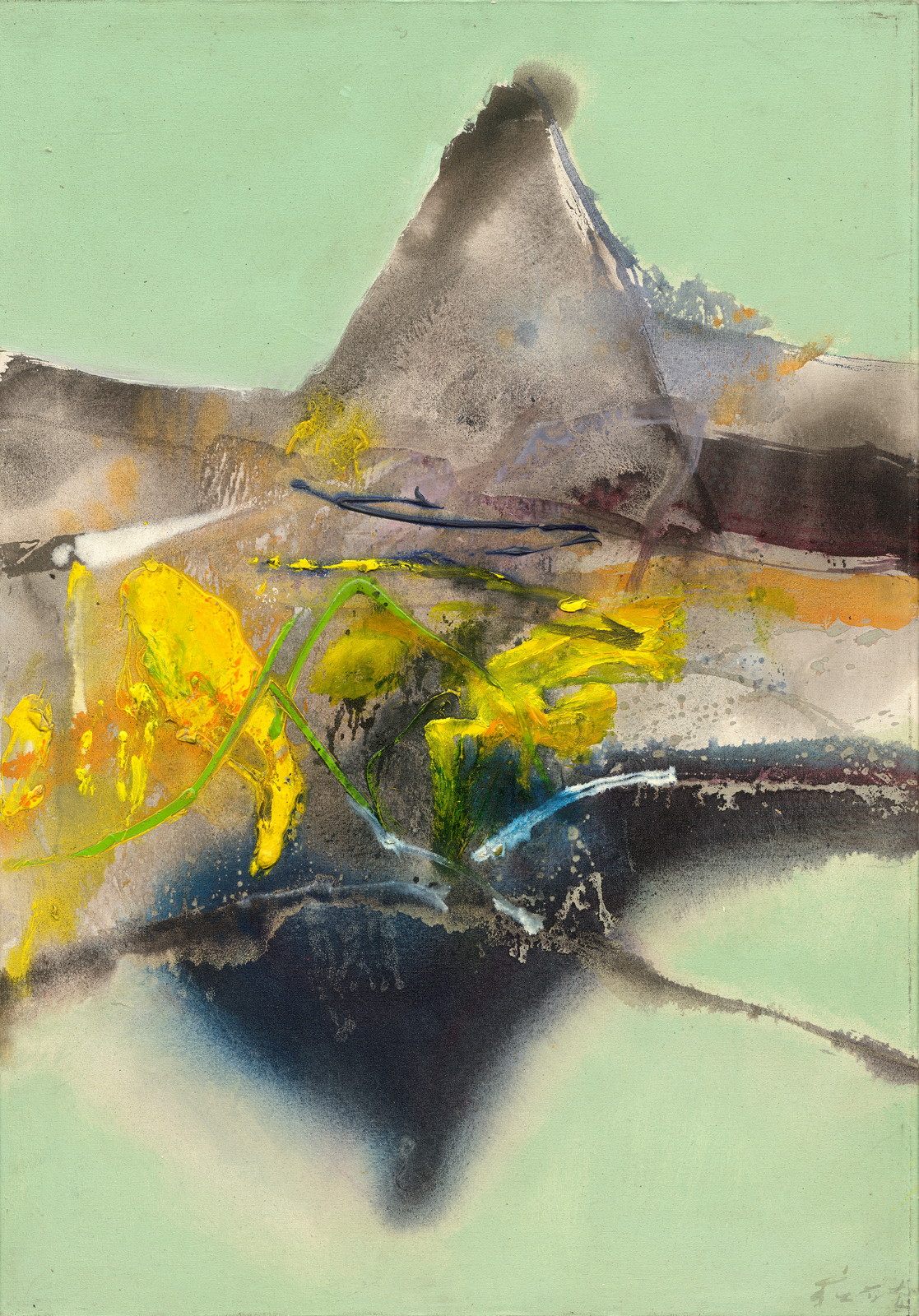 Rainfall Behind the Mountain