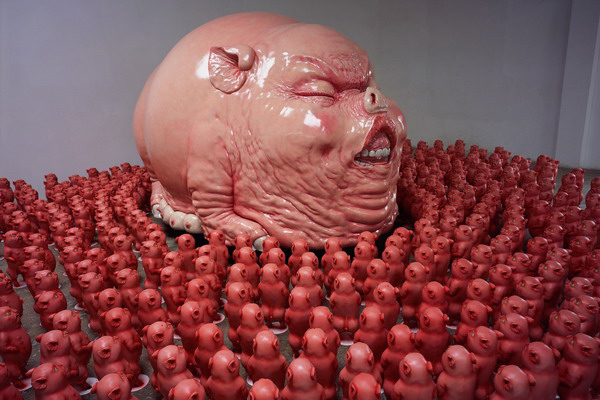 In the Chinese contemporary art circle, Chen Wenling is indeed a rising star who quickly establishes his artistic outlook. With persistent diligence and vigorous creativity, he presents the world of art with one series of work after another. He also participates in various exhibitions and attracts the attention of many people. More importantly, due to the consistency within the developing logic of his art, his works are characterised by a salient feature. In the contemporary art, the unity between the personality of conception and the personality of style is at least the basic measurement of mature art. By this standard, Chen Wenling has constructed his own world of art.

It could be said that Chen’s art is strongly neo-realistic. He sensitively perceives the hedonism growing in the society at the age of rapidly swelling consumerism. An artistic language to express, reveal and criticise this worldly reality is what he seeks and he finally finds his channel of expression by resorting to the “biological being” common to both man and animal. His works first present man at the state of certain ecstasy and glee, exposing the true nature of material desire in an ultimately egoistic phase, which can also be regarded as an artistic magnification of scenes from the material life. In many of his works, he juxtaposes the features of man and animal in one sculpture, thus depicts the situation when the demarcation between man and animal or human behaviours and animal behaviours disappears. In terms of the mental state of sculptures, the expression on the face of a man is as simple and obsessed as an animal, whereas the animals are given man-like mental states and desires. No matter man or animal, they all appear to be in a deviated state of mind, happy and stimulated. The juxtaposition of “personification” and “hypostatization” is a method acquired by Chen in his exploration of art. He adopts this method nonstop in his series of works so that it multiplies and gains more value, forming a developing momentum propelled by a self-sufficient driving power within.

Being one of the most promising sculptors in his generation, Chen Wenling often surprises people with his great imagination and creativity in his well-known series, such as the early “Red Memory”, “Happy Life”, “Valiant Struggle”, until the most recent “China Landscape” series. Chen Wenling’s solo exhibition in September 2008 is the artist’s first-ever solo show in Beijing within these few years. This exhibition shows not only some Chen’s significant pieces in his recent series as well as the latest artworks, but also some installation, photography, and video artworks.