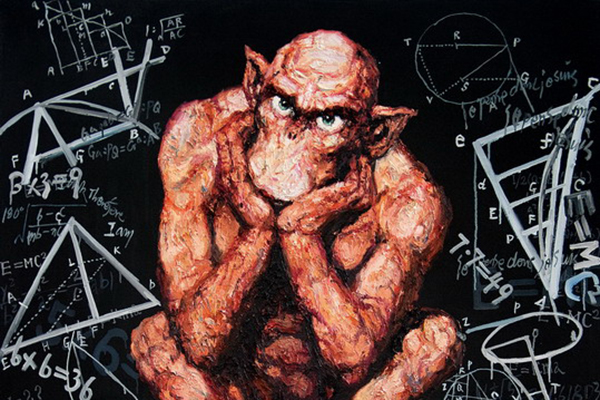 “I Think, Therefore I Am”- 2010 Exhibition of Recent Works by Hua Qing

Hua Qing was born in 1962 in Anhui, China and graduated from Anhui College of Art and Central Academy of Arts and Design. Over the years, he had resided in many different places with diverse culture, such as Vienna, Yugoslavia, Slovakia, Taiwan, and China. The artist has experienced the vast difference between Western and Eastern culture. Moreover, witnessing the civil war that broke out in the Eastern Europe shaped the content of his creative works. Through painting, he investigates the purpose and product of civilization.

Hua Qing was first known for the dramatically painted red apes and the juxtaposition of apes and scientific and mathematic symbols. The artist’s works are inspired by French philosopher’s famous statement: Cogito ergo sum (I think, therefore I am.) Through his works, he investigates the relationship between human being and other living species, and at the same time, he re-examines the meaning of human civilization. As he continues to explore different subject matters, Hua Qing has developed his unique visual language. In his recent works, he has painted animals other than apes and Stonehenge monument, and he has placed these subject matters in front of symbols of philosophical, literal, mathematical, and artistic development hoping to inspire reassessment on the purpose of our establishment and future progress.

Among “Bird in Thought Series” , “Bird in Thought – Turkey” portrays a turkey and possesses human expression redefining what differentiate human from animals. “Memory Stone Series” reinterpret artifacts from the Eastern and Western culture. For instance, the head of a Buddhist statue in “Memory Stone-No.6” appears among symbols that present civilization. It seems to question what sets the foundation for human development. Moreover, Hua Qing’s signature “Red Apes Series” is also included in the exhibition. With Hua Qing’s most recent works, Asia Art Center hopes to inspire re-examination, reconsideration, and reinterpretation.