The title of the exhibition entitled “Watching the Clouds Roll By: Koon Wai Bong Solo Exhibition” is quoted from My Retreat in the Zhongnan Mountains by Wang Wei, a poet of the Tang Dynasty. As Wang wrote, “I’d stroll to seek the fountainhead, and there take a seat to admire the sky and watch clouds grow.” The Eastern Jin poet Tao Yuanming also wrote that “there clouds idle away from their mountain recesses without any intent or purpose, and birds, when tired of their wandering flights, will think of home.” At that time, ancient scholar-bureaucrats admired an atmosphere of deep and clear, the romantic under the forest, and pursued the self-awareness of tranquility and otherworldly. Their aesthetic appeal tends to be clear, secluded, cold, quiet and natural. These temperaments are perfectly reflected in Koon Wai Bong’s artistic creations.

When you walked to the exhibition hall, you will see a series of multi-type works with bamboo with the themes of Eau de Nil, Bamboo on a Rainy Day, and Gentleman. Koon Wai Bong studied and thought about painting bamboo, as he states that “The trick to painting bamboo is to use a writing brush firmly, but the posture should be elegant and refined. The branches and trunks need to highlight the form as compiling words, whereas painting bamboo leaves as running and regular script in calligraphy.” The artist uses condensed brushwork to extract the balance between concrete and abstract, and leads the audience back and forth in the artistic conception of landscape where fiction and reality blend. On the right side of the exhibition hall, the title of the large-scale work Luxuriant Greenery quotes from The Book of Songs, “Look at the meandering Qi Shui River, there grows alongshore a dense forest of green bamboos. The well-cultivated ruler was so assiduous as if he were cutting and grinding stones, so careful as if he were chiseling and polishing jade.” In this regard, bamboo has also been a spiritual symbol of a gentleman since ancient times, who has a lofty and strong integrity with an imaginary heart. These works not only depict the author’s direct description of bamboo trees, but also imply the natural image constructed in his mind, containing his observation and experience of traveling through nature in the past. When the viewer stands in front of the ninety-six artworks of large bamboo forest, it is as if they are in a quiet and uninhabited area, walking in a peaceful environment.

The ancients mostly used the standard of “pictures in poems meanwhile poems in pictures” to appreciate artistic creations. Putting poems or embedding the truth and interest in the pictures seems even more unique. In Koon Wai Bong’s works, you can not only see the natural landscape in three-dimensional space, but also immerse yourself in time. The landscape is not statically carved, but dynamically grasped. Landscapes, mists and rains, bamboos and rocks are all used to shape this overlapping theme of time and space. The imagery that does not appear directly in the picture is filled and completed through the dimension of time. At the same time, the artist uses a multi-type method to present the objects he depicts. In this regard, the contemporary urban life is flooded with various fluorescent screens all the time. In today’s high-speed Internet era, mankind has already passively changed the way of viewing. Koon Wai Bong re-examines the scenery of mountains and rivers in this way of viewing, bringing the natural memories of the past to the present life experience, from ancient to present, so that the viewer can step into the same river at the same time before the picture. This is also a manifestation of the artist’s integration of time into the pen tip and the picture through the creation process. In 2021’s new work entitled Whispering Woods, the picture has been cut into large and small areas on the left and right, breaking the traditional way of viewing towards ink and wash. The word “whisper” adds to the picture an auditory experience other than vision, which let audiences feel the grass and trees sway with the wind. Therefore, the movement and the static are matched, meanwhile the sound and picture are suitable. It presents what poet Li Bai wrote, “With sand and dust, it is like a vast fog surrounding the land.”

Exploring the term“Watching the Clouds Roll By”, “sitting” and “watching” both let audiences feel the lightness, remoteness and nuance in Koon Wai Bong’s works. In addition, his work also reveals Koon Wai Bang’s open-minded optimism, as it is said that “After endless mountains and rivers that leave doubt whether there is a path out, suddenly one encounters the shade of a willow, bright flowers and a lovely village”. The time and space path that the artist explores through the painting reminds us that we are in a contemporary society with complex and redundant information, and we should still be fascinated by landscapes and nature, living in the present, returning to the true self.

Bamboo on a Rainy Day

Glimmering in the Twilight 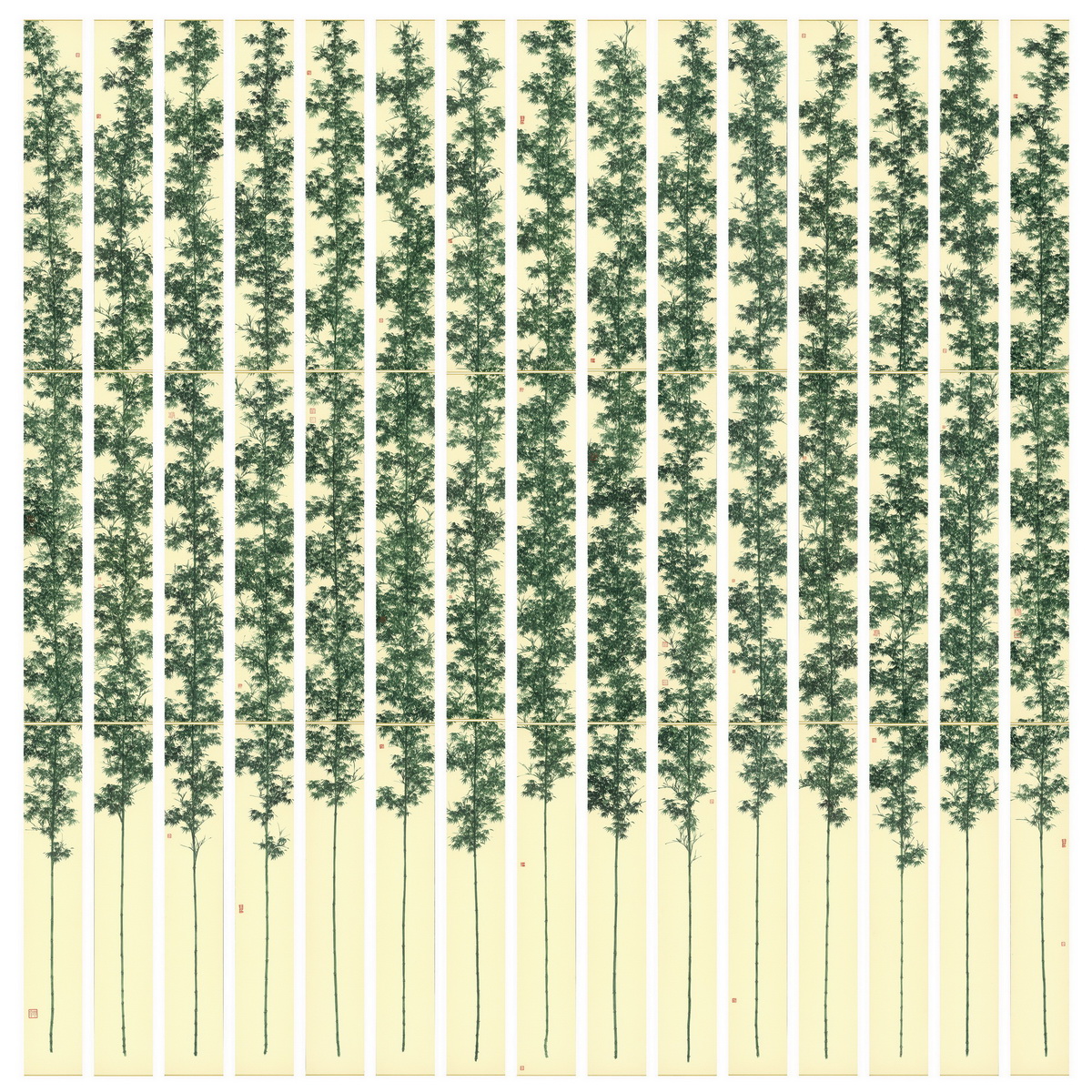 Wintry Mountains along with the Silent Waters

Silhouettes of the Bamboo Trees

A Cloudburst in the Night