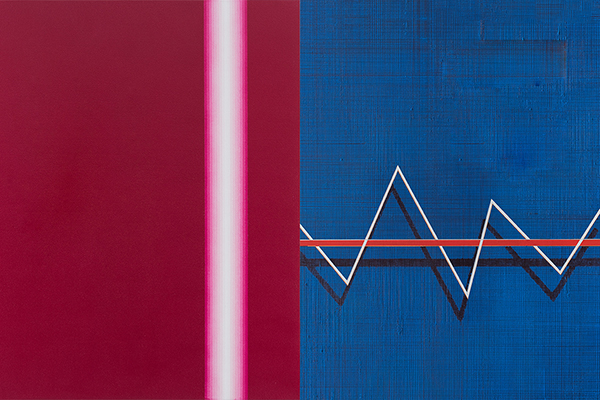 This exhibition is curated by Zhao Li, Professor of China Central Academy of Fine Art, to showcase the recent artworks by two artists: Su Yi incorporates her emotions into balanced and retrained melody, while Tang Mingwei’s geometric lines dance freely in rational rule. The “rationality” existed in abstraction and geometry has given way to artists’ “irrational” self-liberation.

Su Yi’s way of creation is to rationally observe the juxtaposition of line and plane and then combine the structure and color, pursuing a balanced aesthetics in view of plane space in a visual sense. Such rational aesthetics transforms the disorder, inorganic and meaningless color and material into a series of images that are recognizable, identifiable and with a sense of warmth and freedom. Although her hard edge style and minimalism make the paintings’ visual effects appeared cold and mechanical, her works express the attractive flexible feeling and self-consciousness visual aesthetics under her delicate description and effective application of color.

Tang Mingwei views his working as playing a game or making a performance, in which he could play at will without breaking any of his own rule. The rule was built up through numerous horizontal and vertical lines, those lines are somewhat like a great number of a coordinates. With such a definition, the geometric lines look clear and stable, in this way, a series of creations are followed, including disjunction, oppression, construction, bilateral elevation, and confusion of space. Tang Mingwei’s “rational consciousness” is rooted in the ultimate code of life, starting from the irrationality at the very beginning to a highly conscious rationality, and possibly may express irrationality by means of rationality at last. Through rational consciousness and artistic instinct, Tang embeds his expressive emotion in geometric compositions.

“Abstraction” and “geometry” are both expressive forms based on rationality. For Su Yi and Tang Mingwei, it is exactly in the framework of “rationality” where the greatest freedom was found, and true self being discovered.

Tang Mingwei Curve inside The Box 2

Tang Mingwei Structure 01b No.4