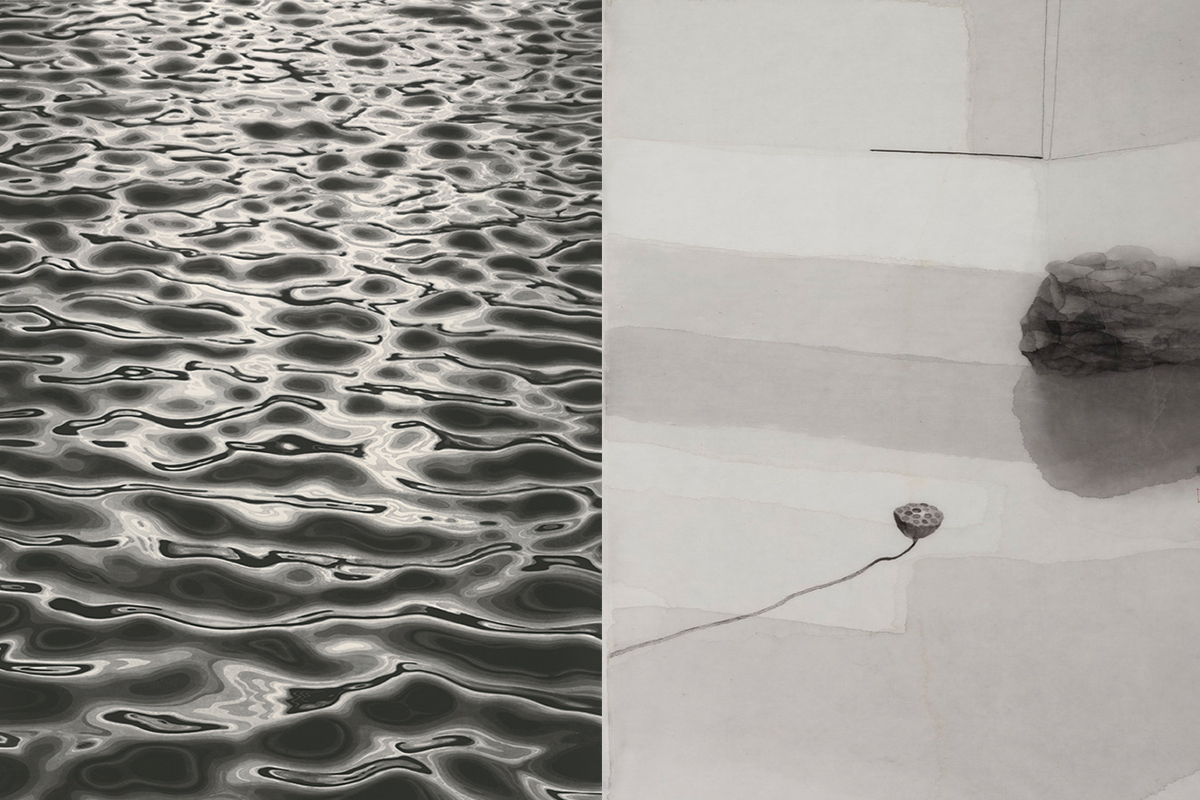 A thousand Shen Qin’s and a thousand Chen Qi’s

In the contemporary arts scene, as soon as any artist is successful (by reputation or in the art marketplace), they will naturally attract layer upon layer of accoutrements, serving to package the dust of success and amidst the mist of that glamour, the public will lose sight of the artists’ inherent nature, thinking of the artists stereotypically. Recently I noticed a magazine featuring a row of famous contemporary artists on the cover. The exquisite cover showed the artists uniformly decked in fashionable outfits and striking cool poses. But in the art world, everyone knows that they are all pretty different, some liking publicity, some rather decadent, some quiet, and some soft, each with their own success, and with their own appearance. Also, when the public views them, and views their works, they also naturally experience their own sense of taste and experiences. So “a thousand readers experience a thousand Hamlets”, and this kind of variation, is exactly the true ecology of today’s contemporary arts.

I am not too worried for these two popular contemporary artists, Shen Qin and Chen Qi, nor do I fear they will be “flooded by their popularity” and its accompanying publicity. Since their aesthetics are both ontological and they have a strong and clear sense of self-confidence about their creative artistic principles and the status of their works over the long term, so they will not likely be easily swayed by broad, popular aesthetic criticism and value positioning. They are artists for whom it is hard to find an appropriate taxonomy, though I am confident about my appreciation of their independence and uniqueness.

Now, Shen Qing and Chen Qi’s exhibitions provide us with a rich and robust example of the living arts status, and as we face their works, I am even more willing to embrace these two “artistic lives” from the perspectives of friend, arts colleague, and individually.

The paintings are transparent, pure, uncertain, and their images are scattered like weightlessness, flowing out ambiguously, with a cold breath of temptation, where there is a paranoid attempt to dodge their fate. The texture of the painting is “subtle and gentle like a baby’s skin”. Shen Qing once said: “Sometimes I place myself on the outside of events”. This is actually not such an easy thing to do. Shen has a very strong sense of justice, with an innocent approach to exploring aesthetic appreciation of the beautiful and the ugly, while producing an aesthetic judgment which strains to the point of “obsession”. Just such an obsession, has meant that he has slowly withdrawn from the world, leaving the turbidity of art trend disputes, “avoiding” all the way to his own Shangri-La, all the while focusing on his “fleeting world”. His works avoid the tempestuous flares. Shen Qing’s path seems to be a tolerant avoidance, but his inner world is actually engaged in a battle for a balanced interest instead of obsession. To tell the truth, Shen Qing’s paintings release an ambiance that the viewer is not quite familiar with, as the woven voices of color fill the replete space between the viewer and painting- you can’t tell if you like it or not. (and if you are tempted perhaps it’s just all up to you anyway.) That somewhat hidden stone is like Shen Qing himself, cautiously emerging from the depth of the painting. His painting opens to a welcoming chorus of voices, and when you realize you have not serendipitously met another by mere chance, he immediately recedes away into the distance. Really, facing a precariously feeble lotus, or a sensitive pond, if you have an attitude of not caring, you will be unable to sense the hidden joys of the painting awaiting only the subtlest of encounters.

I am already used to Chen Qi introducing new works with a lot of information. It’s quite boring as if listening to a lengthy technical engineering report. Complexity is an obvious aspect of Chen Qi’s works, and his art is never born of simplicity, viewers must be patient and intelligent, or they cannot appreciate the depth of the profundity, including all that information. I like this attitude and status. Deep in thought and considered deliberation, yet instantly moving one’s hands, with a robust sense of empirical truth. As Chen Qi and I engage in a dialogue, we rarely boast or brag, but focus on the way of art. As we discuss pure arts, we immediately enter into a discussion of the “technical” dimension. We are all interested in how to resolve issues in the creative or production process. And Chen is a true “Master” of these aspects. He is always working to resolve issues. Some observers noted the painting lacked “intense emotion”. I knew that that perception resulted from the “calculation and control”. The massive wall felt alone. There was no center, and no boundaries, without a high tide and horizon, and even more so lacking any visual waves. It looked like undulating ripples of black patterns, or an almost barren lack of emotion as if nearing demise.

Now, Shen Qing and Chen Qi are holding a joint exhibition. Look at how these two artists over the years have developed their artistic visions: Shen Qing’s narrative begins with the 1985 New Arts Movement, step by step evolving, while a weakly weightless expression began to witness strong supports recalling his mindful inwardness, as if he had escaped the confines of the world to a state of purity. His works are now calculated “subtractions”.

But Chen Qi is quite the opposite. In his early years he featured pure woodprint works, with elegant images of the zither and lotus blooms, until his work with all manner of flora and fauna. Recently his work involves an installation measuring 40m Notations of Time: Flying with the Wind, collating sculpture, architecture and lighting together, displaying an interdisciplinary ability and ambition, candidly revealing without a doubt. Chen is clearly engaged in “addition”.

This one addition and one subtraction, surely tell a narrative of the art history of our era. But as a close confidante, and fellow painter, I am even more willing to directly engage their works. The contents of their paintings, lead me to such a wealth of emotion, to gaze, or engage in wishful thinking, or wonder, and envy. This is precisely the significance that massive paintings should evoke. Facing these outstanding works, I should engage in a cold, considered analysis, explicating them rationally, or so it would seem, and yet how much passion would be lost in the process? Whether one likes their meal hot or cold, it all depends on one’s individual taste, and I am not sure which like I will have offended?

Perhaps we should then refocus on the works themselves. They speak volumes, experience them as you will, so it should be.

In this world, there is only one Shen Qing, and one Chen Qi, and if you are able to witness their exhibition, you will find that in the eyes of the public, there are indeed a thousand Shen Qing’s, and a thousand Chen Qi’s. 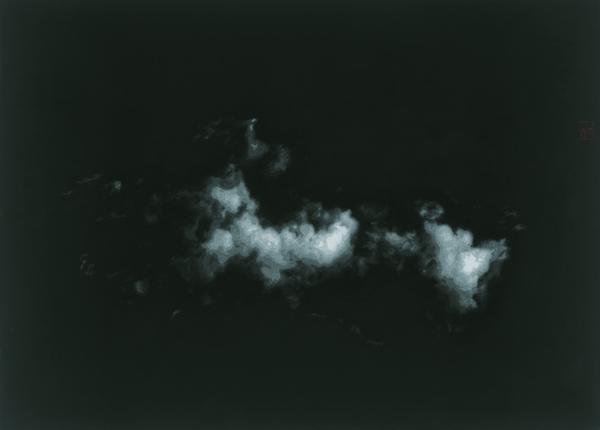 Chen Qi The Cloud-Ten NO.1 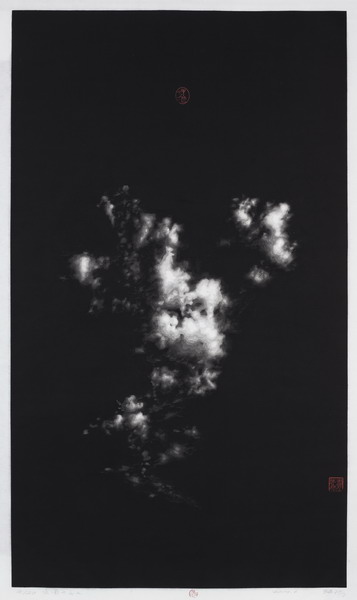 Chen Qi The Cloud-Ten NO.2 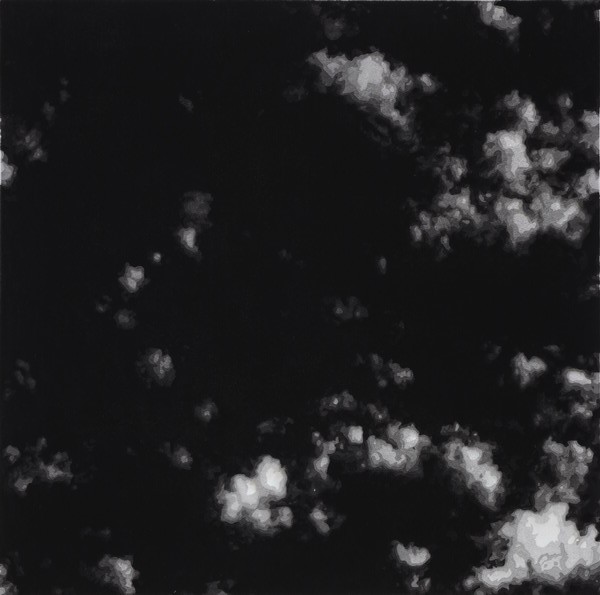 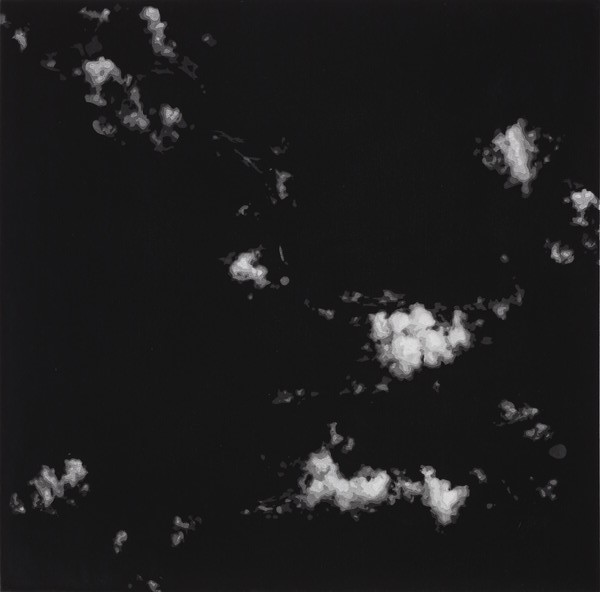 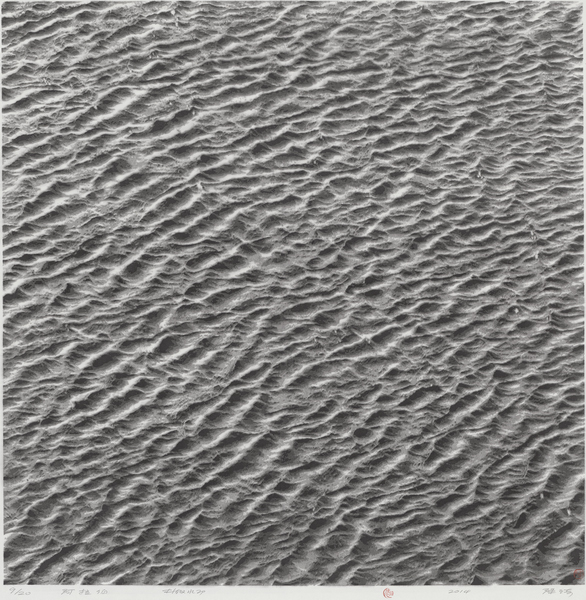 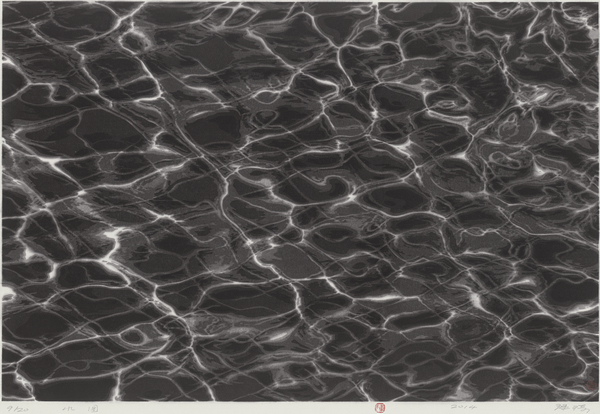 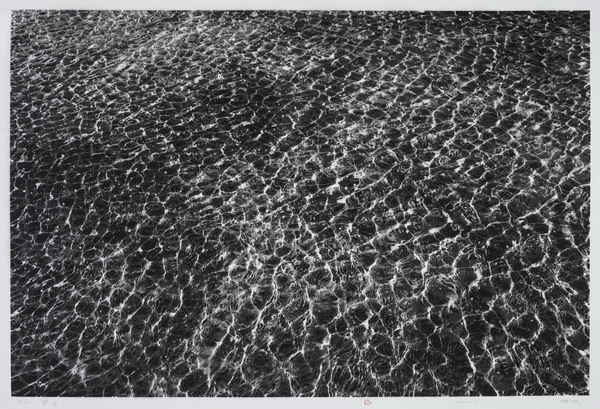 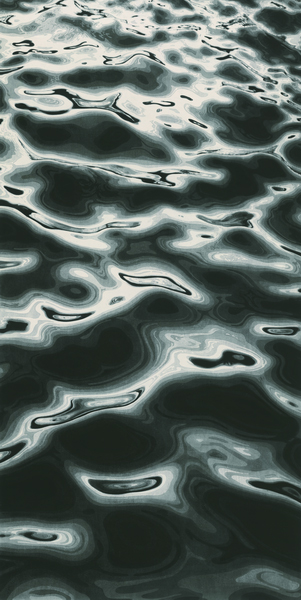 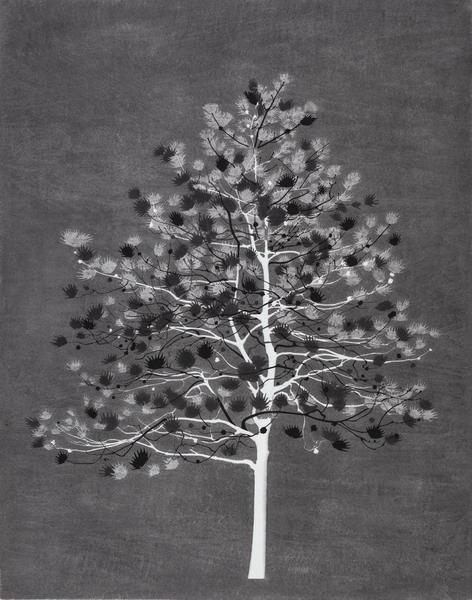 Chen Qi Listening to the Pine Chen Qi Notation of Time NO.18 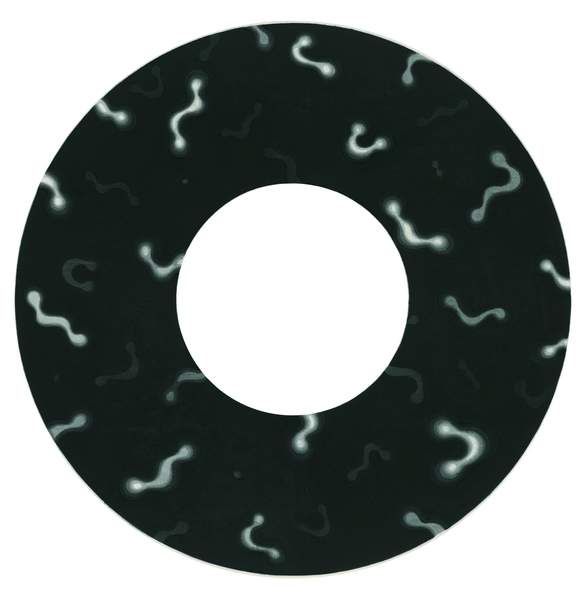 Chen Qi Notation of Time NO.12 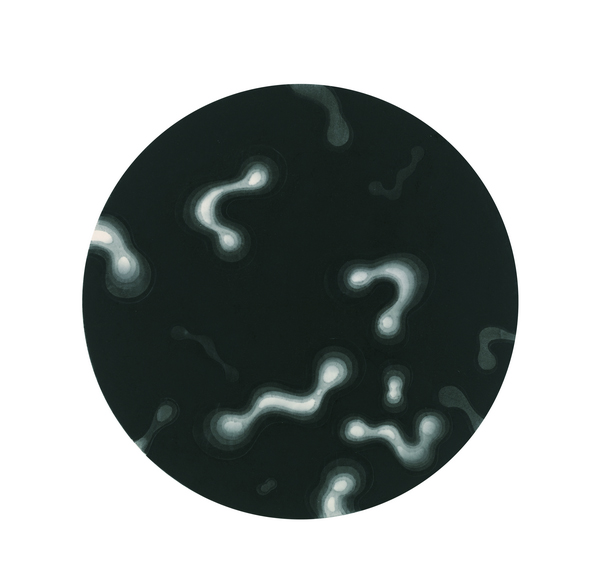 Chen Qi Notation of Time NO.17 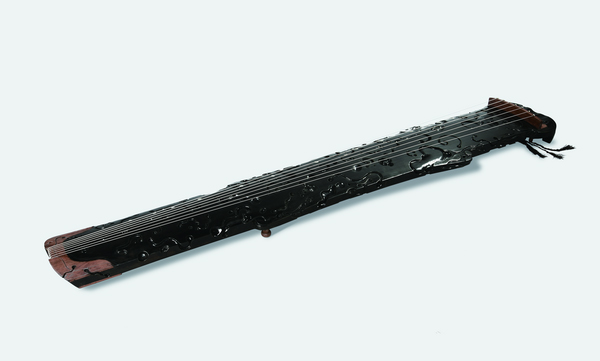