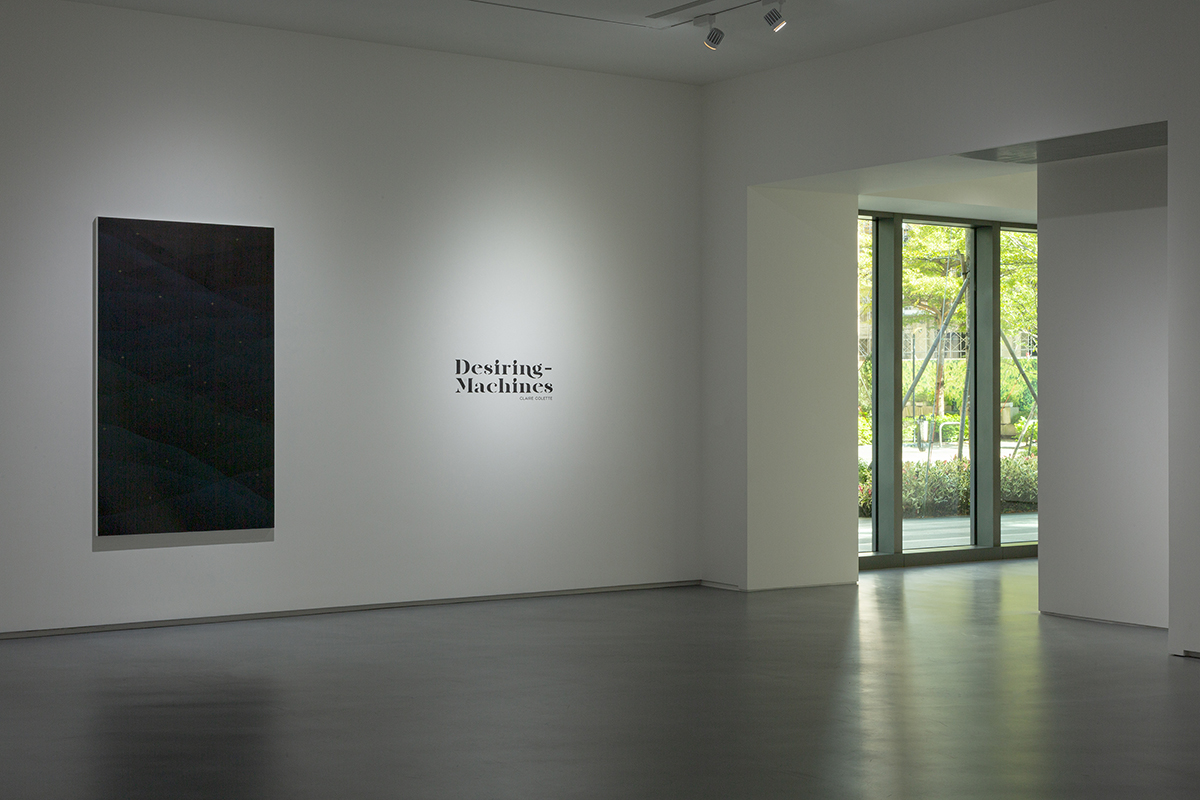 Asia Art Center is pleased to present Desiring-Machines, an exhibition of new works by Los Angeles-based artist Claire Colette, the artist’s first solo show in Asia. This is the second time we will present Colette’s work, following My Secret Garden in 2021.

For Desiring-Machines, Colette will present a group of twelve new paintings on canvas and six oil on paper works.  Inspired by philosophical materialism, ritual practices, and animism, Colette layers paint infused with natural elements, such as incense resin, petals, flower essences, salt, and ash on the surfaces of the canvases. Using the grid as a point of departure in many of her paintings, Colette considers the canvas “a reductive plane with clear boundaries and infinite possibilities”. Visual motifs, imbued with symbolic resonance such as raised lines, half-moons, celestial shape and solar rays, populate the canvas working to create atmospheres of expansiveness and liberation.  Colette’s oil on paper works – her first in this fashion- juxtapose her canvas paintings in their looseness and delicacy.

Working with abstraction and repetitive mark making, Colette employs a refined geometric language to depict mental and emotional landscapes that move from the temporal to the heavenly. Codes repeat themself throughout the surface of the works, such as crosses, numbers and x’s employed as protective emblems. The cross is utilized not only as an alchemical symbol of the five natural elements, but it is seen in the paintings representing stars and cosmic bodies.

Philosophers Deleuze (1925-1995) and Guattari (1930-1992) coined the concept of “Desiring-Machines” analogizing the operation of desire in a mechanical way, explaining desire as an intrinsic, productive and machinic force underlying and connecting all things. For this exhibition, Colette supposes that the paintings themselves have their own agency and are operators in their own creation, viewing the paintings as both a construction of, and simulation of desires and consciousness. Colette notes, “I imagine the painting as having its own desires, and I as a painter am helping it come into being. In this way the painting is a kind of Frankenstein creature with a mixture of both my desires and its desires. The painting is half alive/half machine — a Cyborg.”

Claire Colette (b. 1980, Reims, France) grew up in California, and currently lives and works in Los Angeles as a visual artist and poet. She holds an MFA from Mills College in Oakland, California, and participated in artist residencies at the School of Visual Arts, New York, and Root Division, San Francisco.

Colette has presented her solo exhibition at Asia Art Center, Taipei (2023); Harper’s, Los Angeles, CA and New York, NY (2021 and 2020); Ochi Projects, Ketchum, ID and Los Angeles, CA (2020 and 2018) in recent years. Colette’s work is in the collection of the de Young Museum, San Francisco, and has been profiled in SF Arts Quarterly, MAAKE Magazine, The San Francisco Chronicle, BLOUIN ARTINFO, and The Conversation Art Podcast. In addition to her visual art practice, she has released a chapbook of poetry WIDENING CIRCLES: Poems + Drawings (Los Angeles, CA: Stimulus Progression, 2017).

We Race Towards That Secret, Which Escapes

Thus we shall incline the heart

Some kind of full body, the earth or the despot, a recording surface, an apparent object movement, a fetishistic, perverted, bewitched world

Telling the Dream to the Sun

Yes No Yes No No Yes

Enchantment and its Tragedies, 1

Enchantment and its Tragedies, 2

Enchantment and its Tragedies, 3

Enchantment and its Tragedies, 4

Enchantment and its Tragedies, 5

Enchantment and its Tragedies, 6