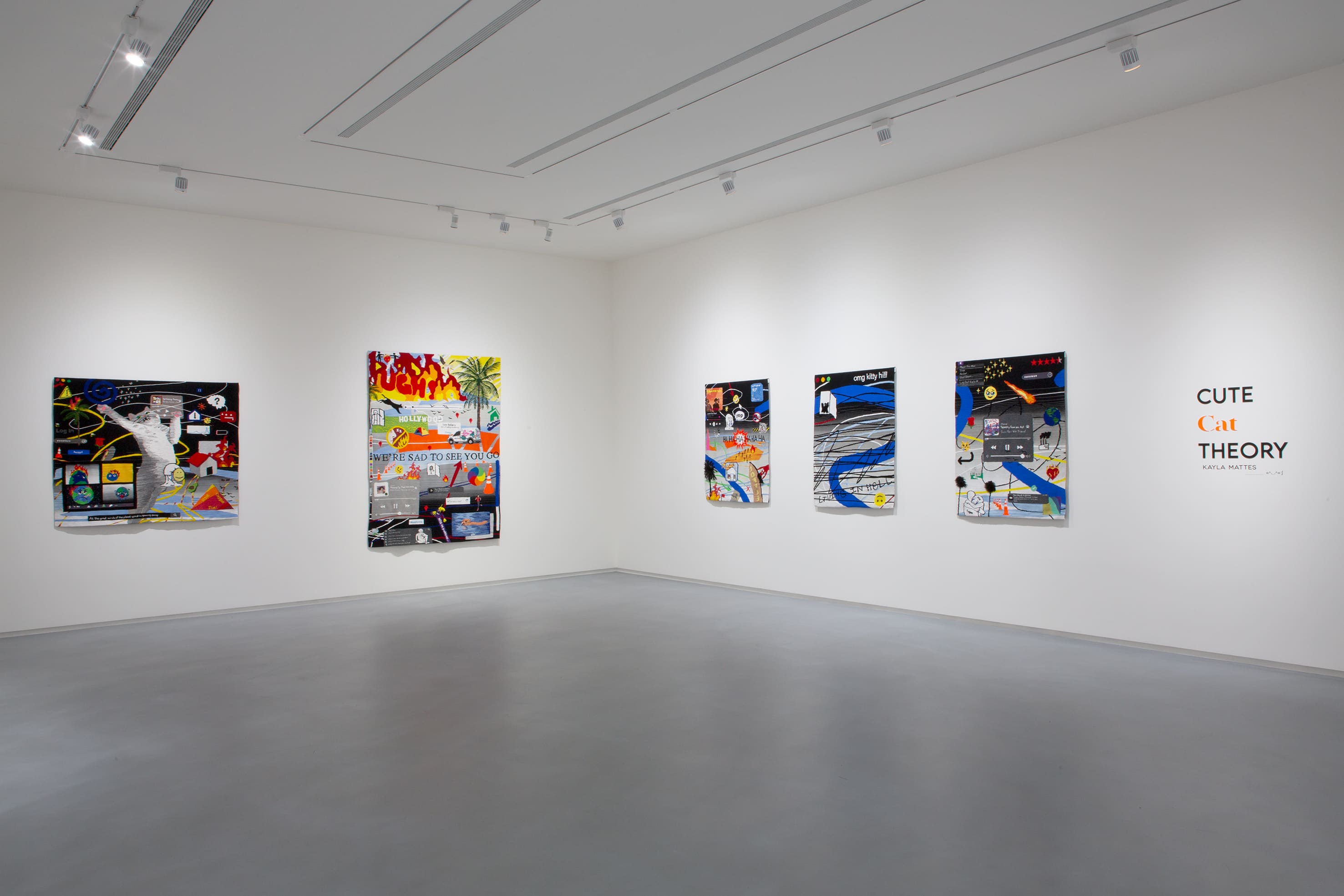 Fascinated by digital culture, artist and satirist Kayla Mattes archives the current moment in her narrative tapestries with a playful blend of humour and cynicism. The work included in her solo exhibition Cute Cat Theory is driven by Mattes’ interest in current affairs, the history of weaving, and our relentless addiction to the screen. The artist slows down the often-dysfunctional world with a fitting medium— tapestry weaving— a time-consuming process that is historically tied to storytelling and structurally linked to computing. Tragic and dire issues become easier to process through the weaver’s comedic references to meme culture and with a focus on the unofficial mascot of the internet—cute cats. Rooted in a concept created by media scholar and internet activist Ethan Zuckerman in 2008, the body of work in her solo exhibition at Asia Art Center dwells on the power of our feline companions within digital environments.

Mattes’ passion for narrative tapestries began with her appreciation for celebrated medieval masterpieces such as the Apocalypse Tapestry from France and the Bayeux Tapestry from England. Tapestry weaving was eventually disregarded as a feminine and domestic craft, and never enjoyed a status equal to paintings and sculptures. Regardless, artists such as Hannah Ryggen made significant political statements through narrative tapestries in a similar manner to grand history paintings that were highly sought after in seventeenth and eighteenth century Europe. Mattes draws on this history to create intricately woven scenes, loaded with recognisable elements such as emojis, Zoom frames, and popular cat memes to make observations on our fast-paced society and its reliance on digital media. The combination of wool, cotton, mohair, polyester, rayon, and chenille tell stories that are deeper than their bright and fluffy appearances initially reveal. Embedded alongside the cats are a menagerie of subtle emblems taken from both the digital and physical world that help to tell stories centered around societal anxieties surrounding both climate change and the effects of the overconsumption of social media.

The artist is heavily influenced by her home-base of Los Angeles, known for its perpetual sunshine, palm trees, and year-round beach weather. LA is often seen as the dream city, yet the effects of car culture, smog, poor street hygiene, and frequent forest fires have led to its newly coined moniker “Shitty Heaven”. The work featured in Cute Cat Theory includes motifs from around the Los Angeles area including the iconic Hollywood sign, traffic cones from the Dodger Stadium Covid Vaccination Centre, one of Kenny Scharf’s Karbombz!—an ongoing project by the well-known pop-artist who tags local residents’ cars with his iconic figures, and a collection of more esoteric symbols and text found by Mattes along the streets and freeways of the city. These references frame the pieces in reality, even though they seem to exist within a digital space.

An important aspect of Mattes’ approach to weaving is how the warp to weft relationship of woven structures parallels the zeroes and ones of binary code. This relationship is fascinating and intriguing, and results in a powerful shift in materials, when the artist weaves fleeting digital imagery into the woven grid. The textured appearance of the screen is even recreated through a process of hand-dying yarn and meticulously altering the placement of weft colors to achieve pixelated and gradient effects. In the series of portraits of ‘Bread Cats’, the artist also mimics the movement of a GIF image within the tapestry, with several of the cats eyes, mouths, and noses doubled up.

Mattes begins the tapestry process by creating digital collages from a collection of images taken from the Internet and from around her home-base of Los Angeles. These collages are enlarged into tapestry cartoons—pencil drawings that get placed behind the vertical strings of the loom. The cartoon acts as a guide for the artist to weave her compositions entirely by hand on floor looms. Mattes uses traditional techniques that have been used by weavers for centuries, but instead of focusing on religious images like in Raphael’s tapestry designs for the Vatican’s Sistine Chapel, or Goya’s idealistic pastoral scenes for the Spanish monarchs, she collages comedic and cynical portrayals of current events that reflect on the artist’s observations of society. She sometimes references her personal screen in the work, with “Log Out Kayla M” embroidered directly into an Apple computers drop-down menu, and through the inclusion of various songs playing within the Spotify app. With three titles in the show borrowed from popular songs ranging from the 1960s to the 1990s, the lyrics provide subtle references to the narratives within the tapestries, and hint at the artist’s interest in music and popular culture.

Cute Cat Theory recognizes cats as both a source of comfort and comedy, as well as accidental societal disruptors. Cats may remain the protagonists of the Internet for the indefinite future, as long as the need for the relief of the cute cat persists. The artist’s two cats have made the loom in her studio their favourite lounging spot, where they enjoy keeping a sharp eye on the weaver’s progress. Mattes admires cats for their independence, intelligence, agility, and indisputable cuteness, making the feline a fitting star for her first solo exhibition outside of the United States.

Born in Lancaster, CA in 1989, Kayla Mattes explores the current moment with a sense of humour and cynicism through her intricately woven compositions formed by warp and weft. Her hand woven tapestries embrace the narrative and technological history embedded in the act of materialising thread into the woven grid, and act as archival works that document the complexity of human behaviour in an age driven by technology and online culture.

Mattes’ recent exhibition history includes a solo show in Los Angeles at Richard Heller Gallery in 2019, a three-person show at Collaborations in Copenhagen, DK in 2021, and an upcoming group exhibition, Weaving Data, at Jordan Schnitzer Museum of Art in Portland, OR in 2023. Cute Cat Theory is Kayla Mattes’ first solo exhibition with Asia Art Center and outside of the US. She is one of 20 weavers included in the book, Weaving: Contemporary Makers on the Loom, published in 2018 by the Brussels-based art book publisher Ludion. Mattes received a BFA in Textiles from the Rhode Island School of Design in 2011 and an MFA from University of California, Santa Barbara in 2019. She currently lives and works in Los Angeles, California. 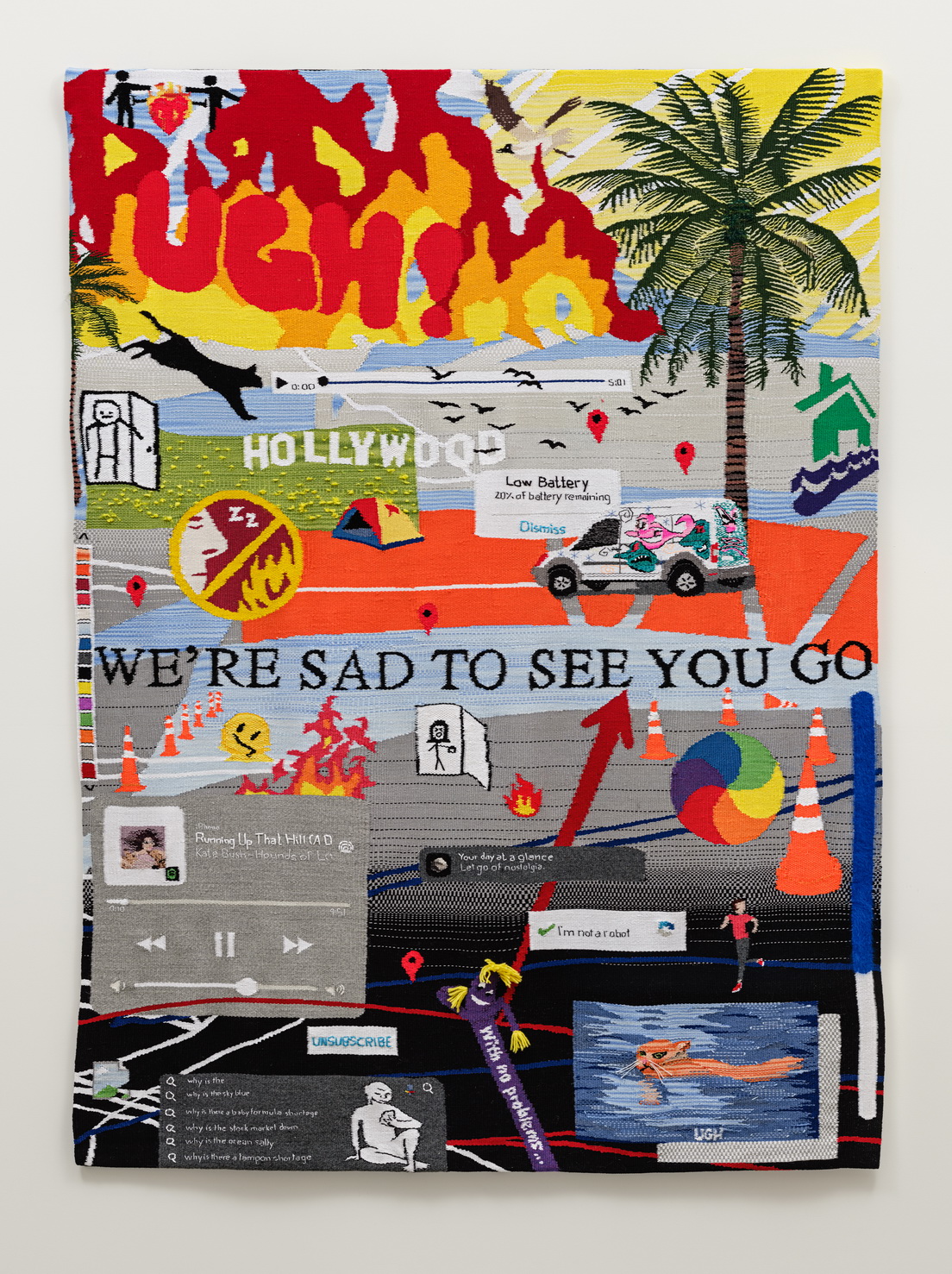 Situation Normal, All f**ed up 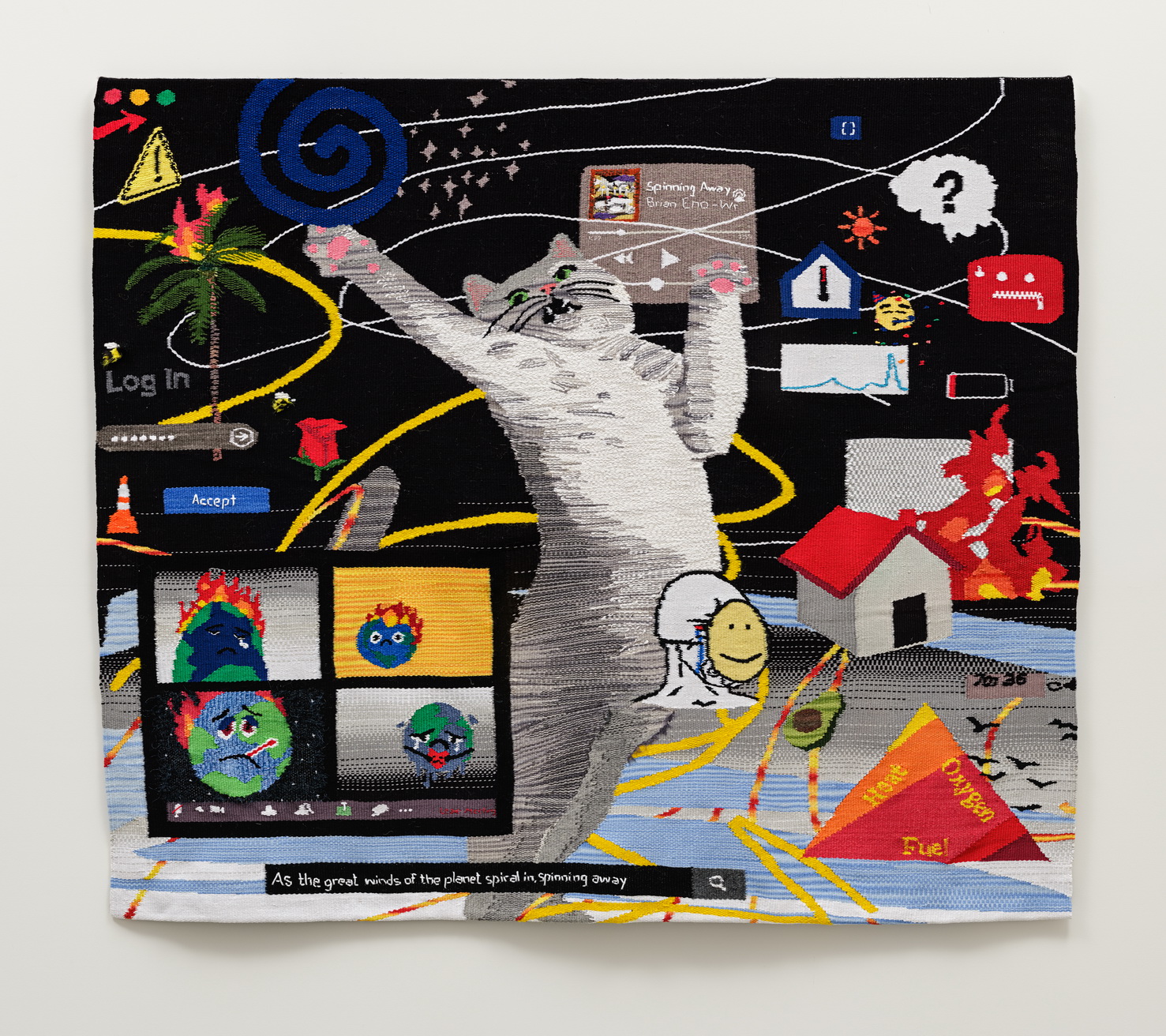 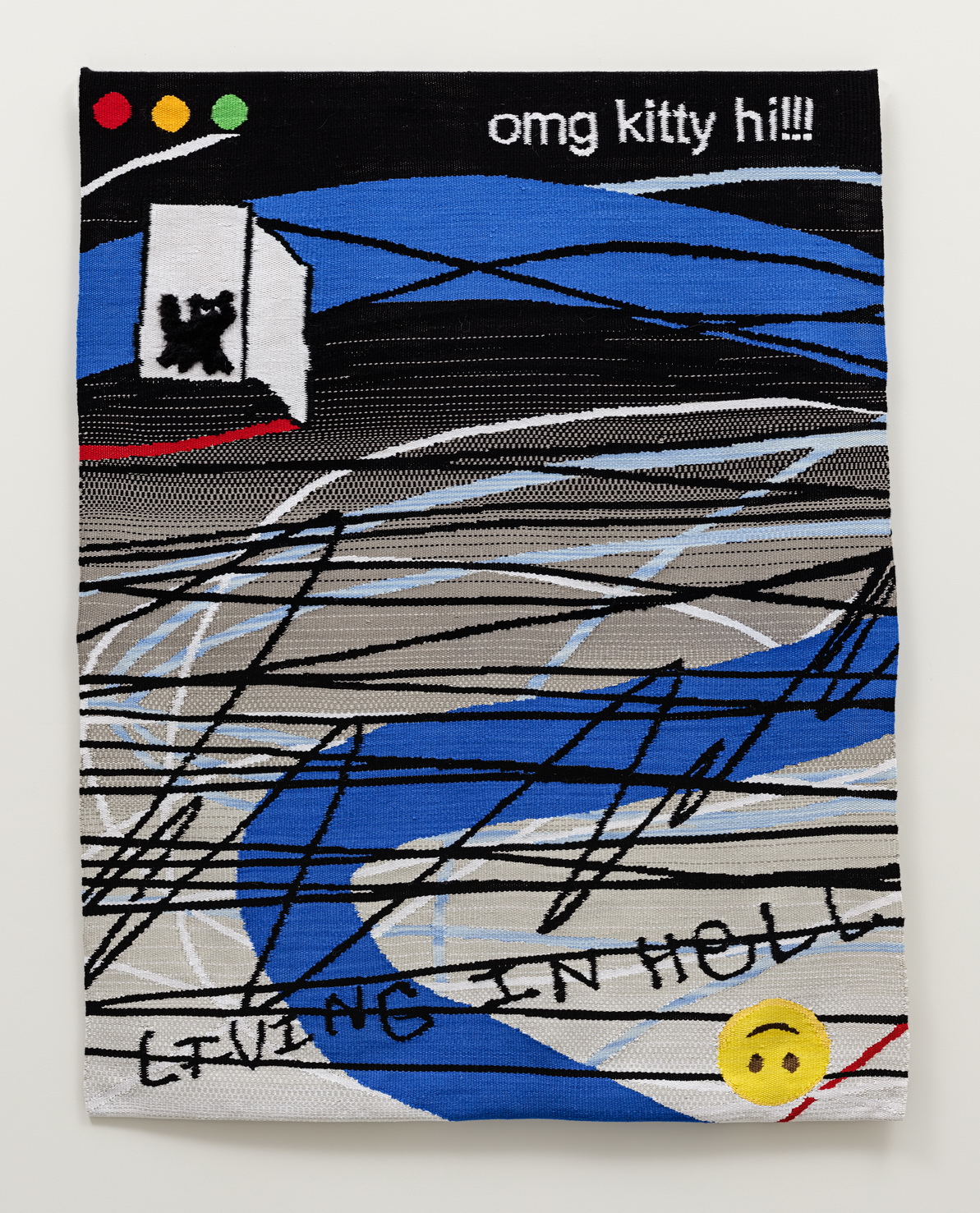 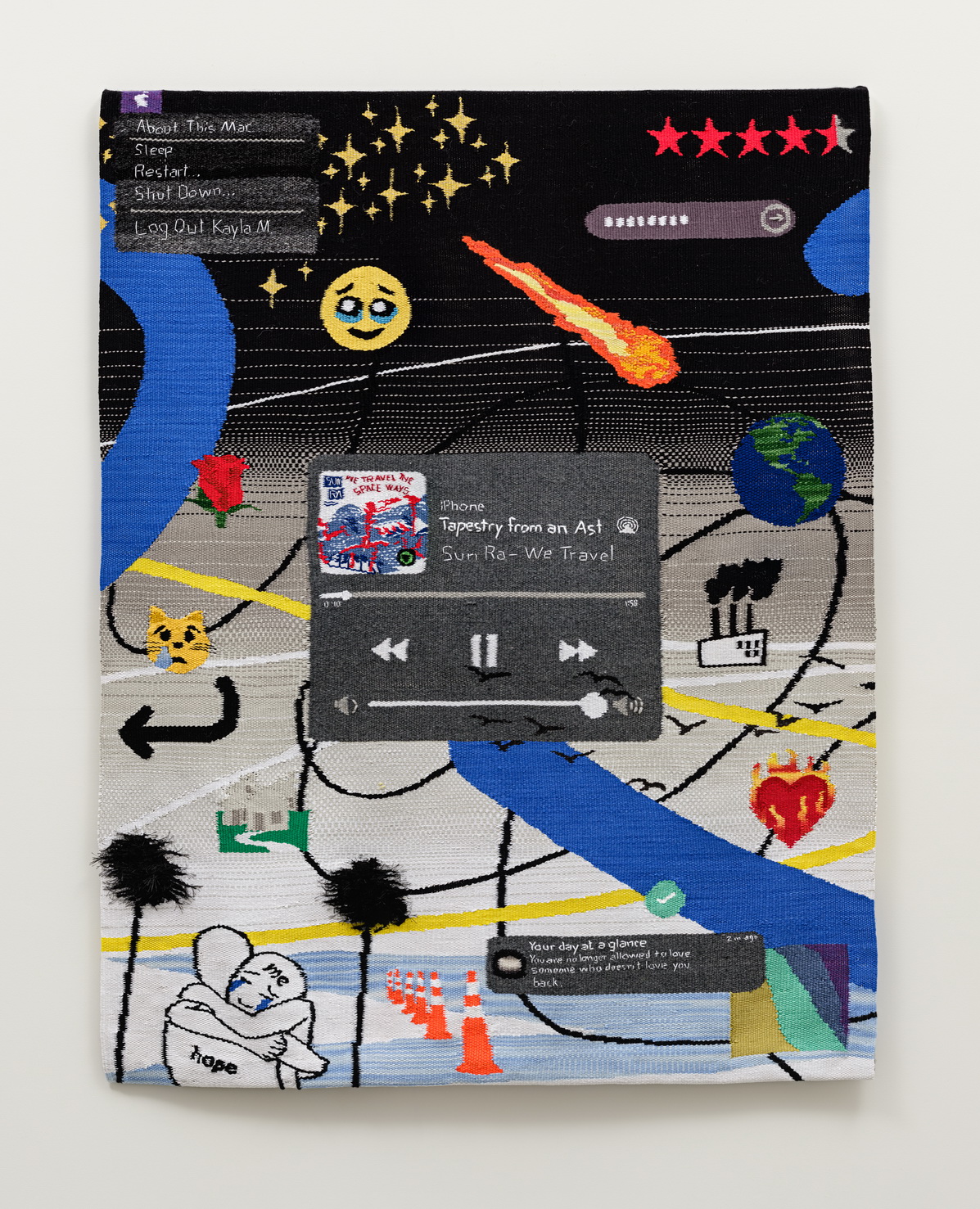 Tapestry from an Asteroid Hang in there baby!