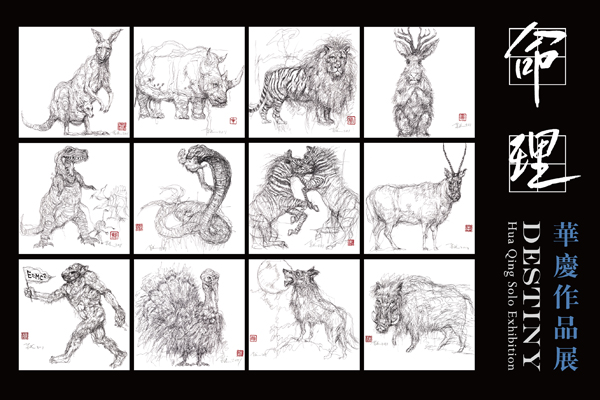 Hua Qing, was born in Anhui province of China in 1962, and graduated from the Central Academy of Arts and Design in 1986. Since 1987, he has cooperated with many galleries from different countries. In 90’s, his life and art experiences in Europe and Asia deepened his understanding of western and eastern cultures, and he became more tolerant of and more adaptable to cultural differences. He created unique art language and symbols with his philosophical perception of human thinking and the ever-changing human society.

Hua Qing’s art work highlights two important sides – man’s physical look and subliminal thinking. The animal theme, which is closely connected with the evolution of human beings, is an allegorical symbol of his works. Animal images have a lot in common with human beings’ facial characteristics while revealing an underlying masculine wild power. The rational thinking of human beings, as the background, is expressed through mathematical symbols and philosophical sentences, which have been used until now by all courses and fields.

The natural state and rational thinking of animals interweave with each other and form a world different from modern society. This time what Hua Qing is trying to break through is the expression of human numerology. This is a “non-human” world. Although the human being is the material carrier of “rationality”, they have their animal features. To some extent, man is like animal and its primitive attributes cannot be forgotten. This is just the basic instinct of human beings that artists intend to evoke, which is not easy to discipline under civilized constructions. It was born because of “nature” and cannot be controlled by social mechanism, which foreshows the irreversible and unchangeable foreordination of human beings. Hua Qing’s works, with both sensibility and rationality as well as both animal attributes and social attributes, forms a forceful conflict and releases the artist’s acute feelings and strong emotions in a particular way. His rhetorical questions towards human beings’ capabilities of continual improving the advanced society and civilized world indicate his attitude of confronting the laws of nature in man’s destiny.

Asia Art Center Beijing will hold “Destiny” – Hua Qing 2011 exhibition on 27th August. And more than 20 pieces of artwork that the artist has produced in recently years will be put on show. His recent “12 zodiac animals” serial sketch works re-interprets the traditional animal signs of the zodiac in a form of wildness, which uses the primitive expressions while the extension forces are maintained. His recent work also includes the most specific and expressive animal theme oil paintings as well as few of his engraving works. He constructed a forgotten and natural human “realistic” world with his great passion and sagacious language, which shows his ultimate concerns of the human destiny.

Gaze at Each Other

White Horse is not Original Horse