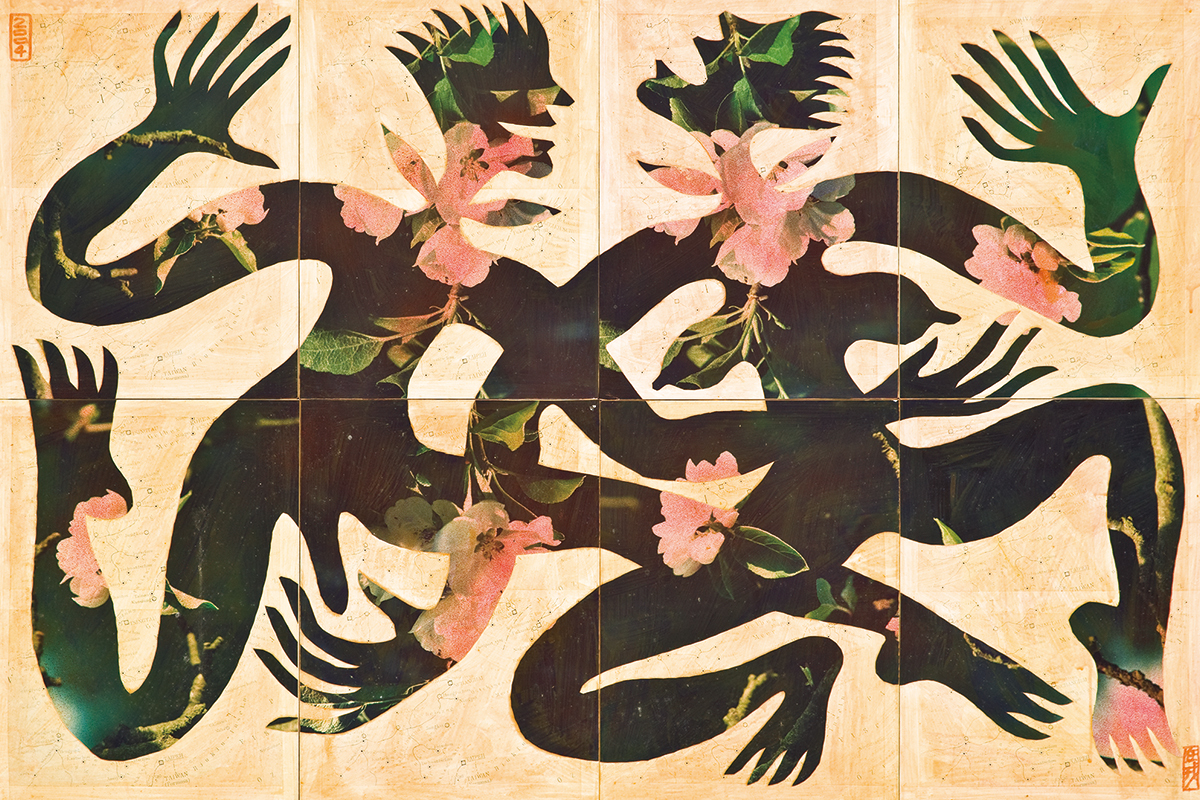 With strands of hair blowing in the breeze, and the human form with a smile, as the limbs dance about ablazing with activity, they burst forth into roots, leaves, and branches, and blossoming flowers… These amazing “Figure-Plant” images are the unique creations of Ren Rong, masterfully combining living forms in a chain of life metaphor representing the culmination of his experiences in the cauldron of artistic creativity of Germany during his years there appreciating and incorporating the best of his Eastern and Western aesthetic senses. Ren Rong is like a master goldsmith, able to recreate the alchemy of the university with a completely new recombination, to generate surrealistic creatures which evoke a flying horse parading across the sky, perfectly capturing the traditional Taoist sense of “the universal source of life” and “the grand unity of man and nature”. On December 7, 2013, Asia Art Center held the exhibition “Freedom of the Heart – Ren Rong 2013”, presenting the artist’s most recent years creations of mixed media paper arts and sculpture works, as we introduce you to the world of Ren Rong, in a splendid exploration of the deep significance that lies behind the seemingly casual lines.

In 1986, Rong Ren studied in Germany, at the Düsseldorf Academy of Arts. During his life abroad, he came into contact with numerous German artists, philosophers and musicians, and it was in this environment rich with Western modern art , that he began to engage in critical self-reflection, seeking to elicit his own unique artistic voice. While growing up in the Jiaodong Peninsula, Ren Rong often climbed the hills and went swimming in the nearby rivers, living in close contact to nature, and he has been especially left with deep impressions from his grandmother’s traditional papercuts, which continue to leave their indelible impression on him to this day. His youthful love for nature and thinking has served to the themes of his innovative creations. So his fondest early childhood crafts of handmade papercuts have been incorporated into his creative expressions, and his many years residing in Germany have ensured the integration of Western elements naturally entering into his thought processes… Ren Rong stands at the intersecting crossroads of Eastern and Western culture, deriving spiritual nourishment from these diverse traditions, to create his own ubiquitous signs.

Whether oriental mythology’s dragon, phoenix or lion, or western mythology’s unicorn or griffin, each image combines a repertoire of features of creative elements, such as the most famous Chinese traditional images, the “dragon” which includes elements of the appearance of nine different animals. While they appear in mythology, they are actually the combinations of a variety of imagery, to which certain special supernormal powers are ascribed. In Ren Rong’s imagery, there may be characteristic features of hermaphroditism, or plant sprouting forth from human limbs, or fishes and butterflies with a human face, or man just like insects with four or five appendages. These images combine western contemporary artistic expressions of new appearances, evincing a new sense of combination which integrates willpower and capability in an original living model, revealing the vitality of their nature. These connotations also bear an unmistakable closeness to the traditional Chinese sense of “The Circle of Life ” and devotion to “the grand unity of man and nature”

Papercutting is one of the most ancient folk art of traditional Chinese Han nationality, which permits simple lines to express the most exquisitely complex meaning and emotionality. The free spirited process of papercutting, permits Ren Rong the widest degree of freedom to design and create works in whatever shape suits his artistic sense, perfectly creating his uniquely rich and characteristic personality. The simplicity and hollowness of papercuts, permit Ren Rong a variety of forms for exploration and creation, allowing for combination with photography, painting, and collage, in joyful artistic “playfulness”, creating his own “mixed media paper arts”. Ren Rong’s watercolor series, and the colors of his papercut works, with their unique mounting technique generate the background projection sense of his papercuttings. The colorful watercolors and silent shadow in the frames, yield a robust contrast of dynamic and static feeling, and yet repose in an integral whole, bearing forth a dialogue of space. In his latest works, this dialogue is no longer a silent one, but more akin to the thought contention of hundreds of schools , with a much deeper significance. Just as his work “The Circle of Life”, with its three interconnected pieces, and two sides in deep blue lines, as the center fills with deeply colored papercuts dancing about as in a classical calligraphy text with its light yellow background, the work in its entirety gives the impression of a classically ancient painting. As the viewer takes in the piece at close look, they are drawn into another world: the yellow page backgrounds, are actually like the collage of ancient line drawing, while the blue background is formed from photos of modern and contemporary history in collages with colors. In between the background contents and the center of the image, the artist has created a vociferous dialogue amidst the disordered spacetime. Just as the observer is fixated in this dialogue, suddenly they discover that amidst the images of these papercuts, there hidden the artist’s own imagery amongst the signs, staring at the viewer, leaving one entranced in its vision. In such an image with its dynamic inner and external dialogue, the viewer can sense the artist’s deep personal awareness that he has become his very symbol. Ren Rong has always maintained this sort of strong individual consciousness, and used it with his wide breadth of readings from the ancient past to the present, and using them to convey messages of western and oriental culture to the public, through his unique artistic language.

Papercutting is a two-dimensional art, but Ren Rong does not limit his creations to planes, instead he combines imagery to create relief printmaking and iron sculpture, as well as stainless steel sculpture. Ren Rong‘s iron sculptures create an interesting juxtaposition between rhythmic figures and tough medium, an expression where “hard and soft mutually assisting each other.”;The rusty sculpture surface and ever-changing living environment create their own dialogue across time. Ren Rong elicits a dialogue between the public and his works, not only giving the viewer a visual surprise, but also allowing one to feel and hear. In his large iron sculptures, he put the steel drum stick hanging onto the work, so viewers can take the drum stick down and strike the work to create harmonic sounds. Different angles generate different sounds, and the exhibition site is like a musical concert, where one can not only appreciate the art, but also “hear” the art. In Ren Rong’s stainless steel sculpture, he uses papercutting techniques to design sharp edges with the ice cold texture of the stainless steel, creating a sense of sharp pain for the viewer, trying to express people’s feeling of indifference and alienation in daily improving high-quality life, urging the public to engage in critical self-evaluation.

Whether mixed media paper art or sculpture works, the interplay between space and composition, reflect his exploration of personal awareness by the medium, which for Ren Rong, meanshis creative core is focusing the life itself. Ren Rong has been deeply influenced by the Taoists, and has an irrepressible imagination and love for the universe, heaven and earth, so that all of his supernatural life forms reflect his dreamlike exploration of his soul painted in another kind of form, as well as presenting the common aspirations of man and nature for a symbiotic existence. He hopes that nature can enjoy its freedom and the world; he also aspires to reflect his deep attachment to life, through his freestyle paintings, creating without restriction on the creation path. In a “dialogue” together with Ren Rong, it will take you to experience his creative works “Freedom of the Heart”, with cultural sparks from his clever blend of the oriental spirit and western forms, and feel the respect for life that exist in people’s mind..

Out of the Forbidden City

The Dialogue – Salute to the Ba Da Shanren-No.1

The Circle of Life

Dialogue in the Garden