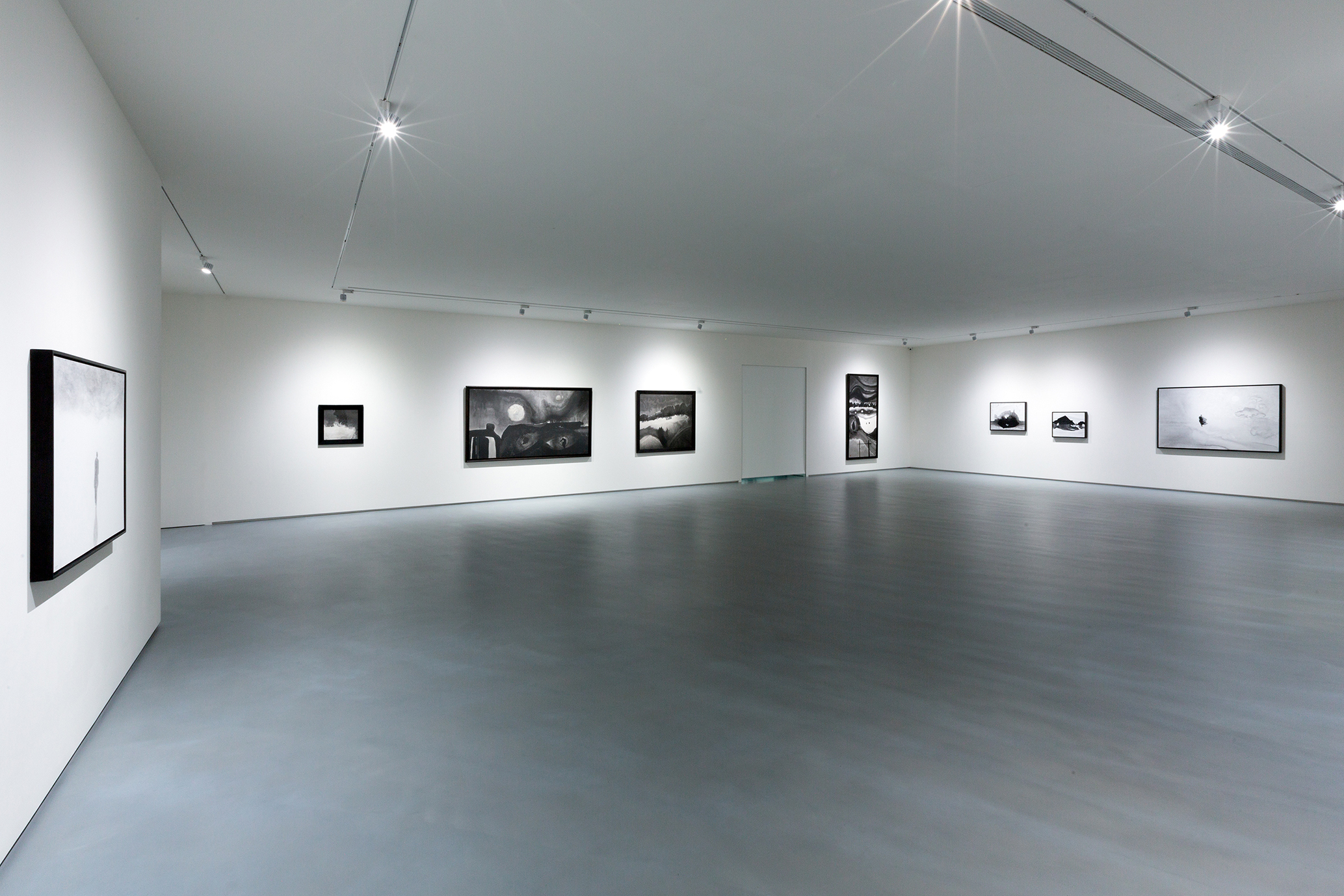 Gao Xingjian: Where spirit dwells on

Gao Xingjian, a Nobel Prize laureate for literature, proposed the concept of “Without ism” in the late 20th century, advocating for transcendental aesthetic experiences and forms of perception that break away from utilitarian, individualist, political, and other social functioning frameworks. His philosophy deviates from various Chinese and Western post-modernism trends of thought which emerged with the rise of Modernism in China and the West and calls out for free and boundless intuitiveness that’s non-vacuous and not non-existent. The practice can be applied to different forms of art, including literature, cinema, painting, theater, photography, and other paradigms. Painting is an important art format that Gao focuses on, with the ink and brush used by him to convey the East’s calm elegance, while also highlighting the West’s attention on the existential subject. Upon closer observation of Gao’s paintings, the moving washes of ink seem to exude a shimmering shine, conveying that as the inherit spirit is pondered, a spiritual glow would naturally unveil. At the same time, conventions with how light sources are dealt with in painting are also broken, with the boundaries of art pushed and expanded. Gao Xingjian’s art and aesthetics can be applied as a methodology in today’s world which has been pandemic stricken since 2020, serving as a reminder for humanity to profoundly observe and reflect on our evolving civilization and our self-worth. In celebration of Asia Art Center’s 40th anniversary, the exhibition, Gao Xingjian: Where spirit dwells on, will be presented from August 13th to October 9th, 2022. In the current turbulence, the select artworks created between 1994 and 2018 will take the audience on a journey revisiting the world created by the artist through his free and expressive ink paintings.

Gao Xingjian was born in Ganzhou, Jiangxi of China in 1940 and moved to France in 1987. As a thinker with complex and restless thoughts, he has been driven to escape and break free several times in life. A writer who gained prominence after the Cultural Revolution, Gao once worked as a translator for the China Writers Association and was under the spotlight in the early 1980s for the influential theories of literature he had proposed. However, his philosophy contradicted with the principles of social realism advocated by the political regime at the time, which led to his decision to leave China. He later wrote the novel, Soul Mountain, which is pervaded with a sense of nostalgia. Gao won the Nobel Prize for Literature in 2000 but chooses to keep out of the limelight, and he devotes himself in creative endeavors that include theater, cinema, photography, and other art forms. He sees escape and migration of cultural geography and art forms as a thinker’s spiritual response to the call to freedom. At the same time, by maintaining a distance, it allows the artist to gain clearer insight on the truth in today’s tumultuous society.

Actively creative, in addition to his prestigious literary achievement, Gao has also garnered extensive attention in both the East and the West for his paintings. His distinctive language of painting is clearly observed in this exhibition, as seen in the artist’s cool and graceful compositions, textures with overlapping ink, the immense and solemnly silent sense of space, and the natural poetic-ness. The restrain demonstrated reflects Gao’s immanent activities, and by roaming through the territory of personal will where he explores, questions, and scrutinizes, he is able to calmly liberate himself after a floundering and unfathomable process of pondering and refinement. Inner View and Illusion, which were created in the middle of the 1990s, present ink in brilliant and varied ways, with light and shadows emerging one after another through dynamic washes of ink, resulting in majestic views created through the artist’s naturally ingenious brushwork. State and Dream Home, created around the turn of the millennium, investigate between the figurative and the abstract and wander through illusion and reality, traverse the spectrum between black and white. Recent works include To the Sky, Inner Vision, and Illusion, and the images presented are ethereal and vast, with complementing visual and mental images presented. The paintings’ narrative perspectives shift between far and near, and a sense of empty quiescence percolates beyond the images, showing an infinity of time and space that’s self-evident. Traces of references to other art genres are also observed in how Gao considers art, including the adaptation of photography techniques to create a drifting and shifting depth of field, with a way to approach visual perspective in mental imagery also suggested. Emotions associated with musical rhythms are also introduced into a two-dimensional world filled with vivacious and light energy. How characters are placed in theater is also converted to work in a two-dimensional space, with interesting ways to see and interpret his artworks offered through the artist’s extensive and prolific background.

Gao Xingjian was born in Jiangxi Province, China in 1940. He graduated from the Beijing Institute of Foreign Languages with a major in French Literature in 1962. He left China for a life in exile in Paris in 1987. In 2000, he became the first individual of Chinese descent to receive the Noble Prize for Literature. His multifaceted work is extensive; literary theorist, playwright, writer, critic, dramatist, director, distinguished translator of a number of important published works as well as being a renowned painter. Gao Xingjian’s thinking lies in-between Modernist aesthetics and the humanity, and his painting combines Chinese traditional concept and Western abstractionism, lying in-between figurative and abstract. In 2003 Marseille, France gave art events concerning Gao Xingjiang’s creation and titled the year “Year of Gao Xingjian”. His solo exhibitions include: Gao Xingjian: Papier Tusche Film (ZKM, Karlsruhe, Germany, 2008) and L’Ombres des mots Gao Xingjian et Günter Grasse (Musée Würth France Erstein Erstein, France, 2009). In 2015 Belgium’s Musée d’Ixelles and The Royal Museums of Fine Arts of Belgium gave Gao Xingjian: Retrospective and the The Royal Museums of Fine Arts of Belgium collect six monumental works by Gao Xingjian, especially created for the room they are displayed in. In 2019, he was invited by the French government to give the exhibition Appel pour une nouvelle Renaissance (Call for a New Renaissance) at the Domaine de Chaumont-sur-Loire, a great Renaissance French castle. 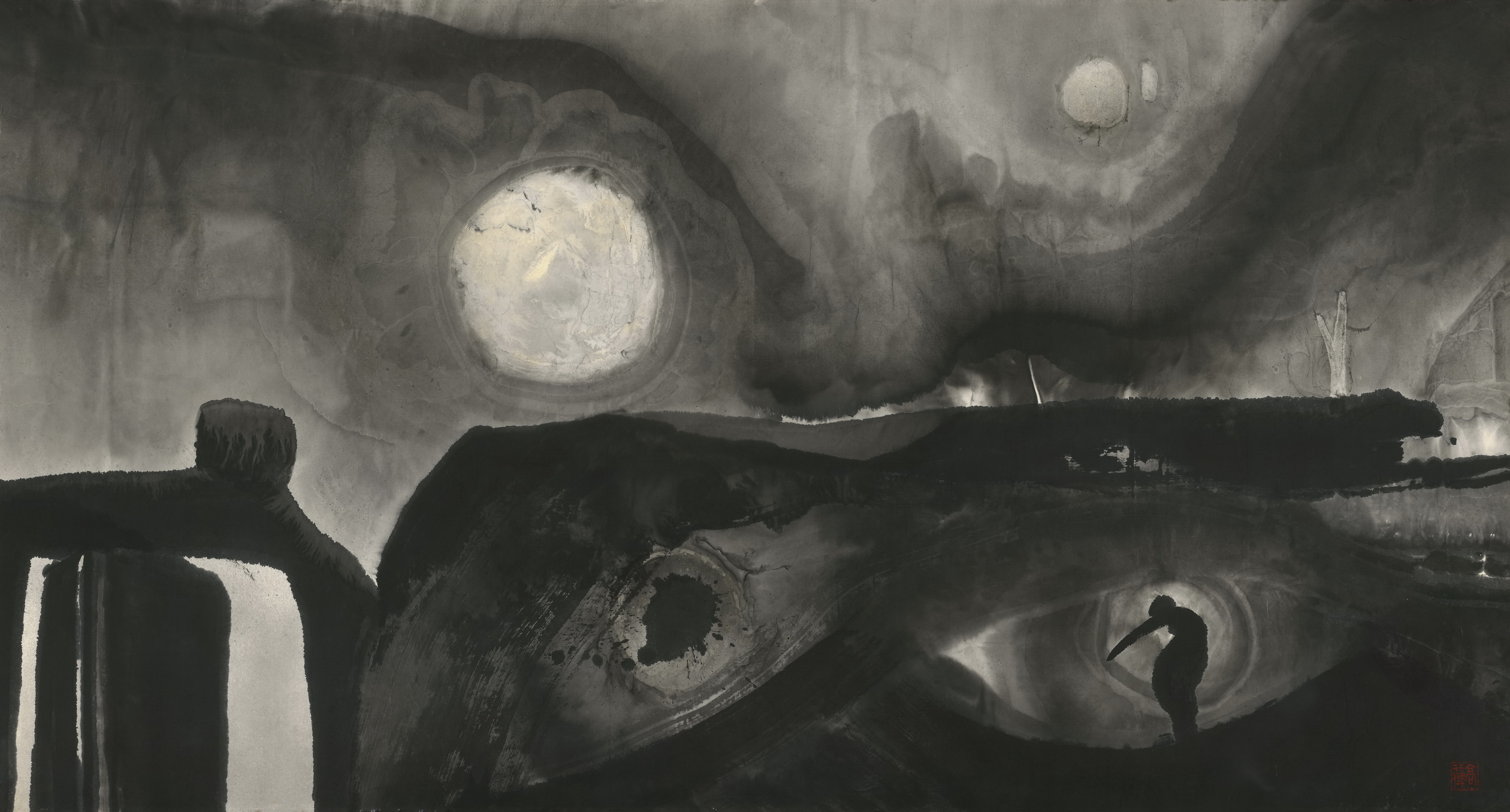 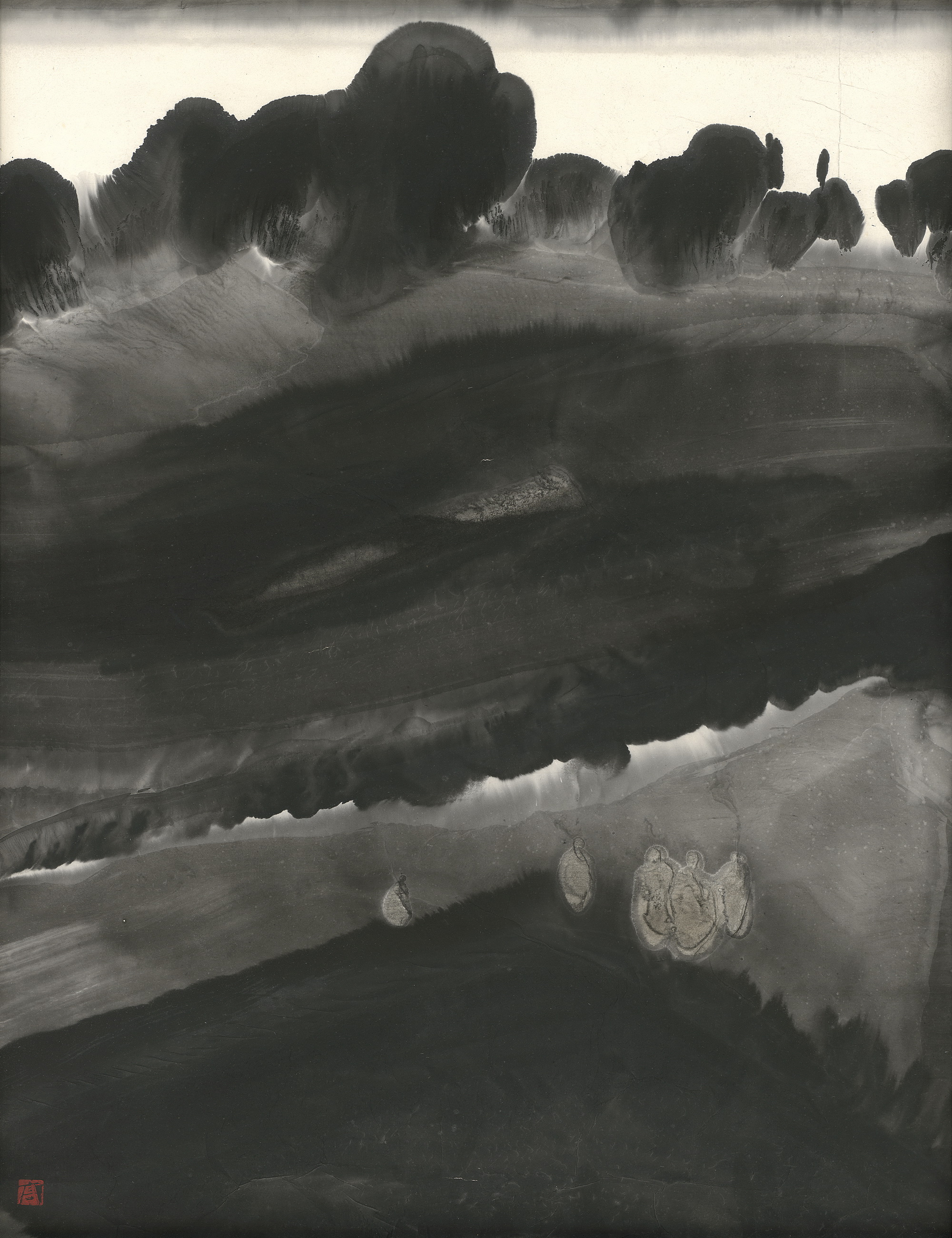 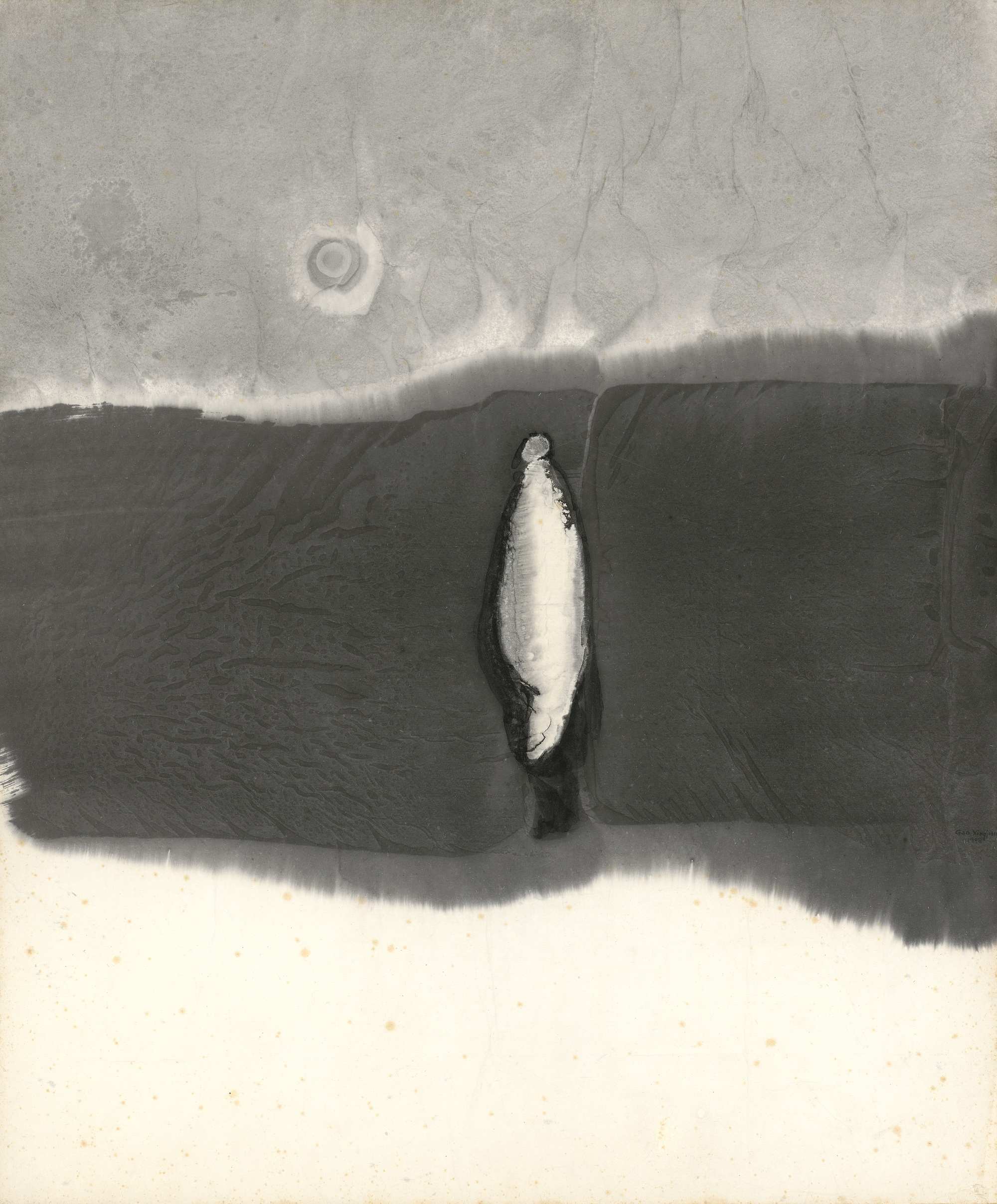 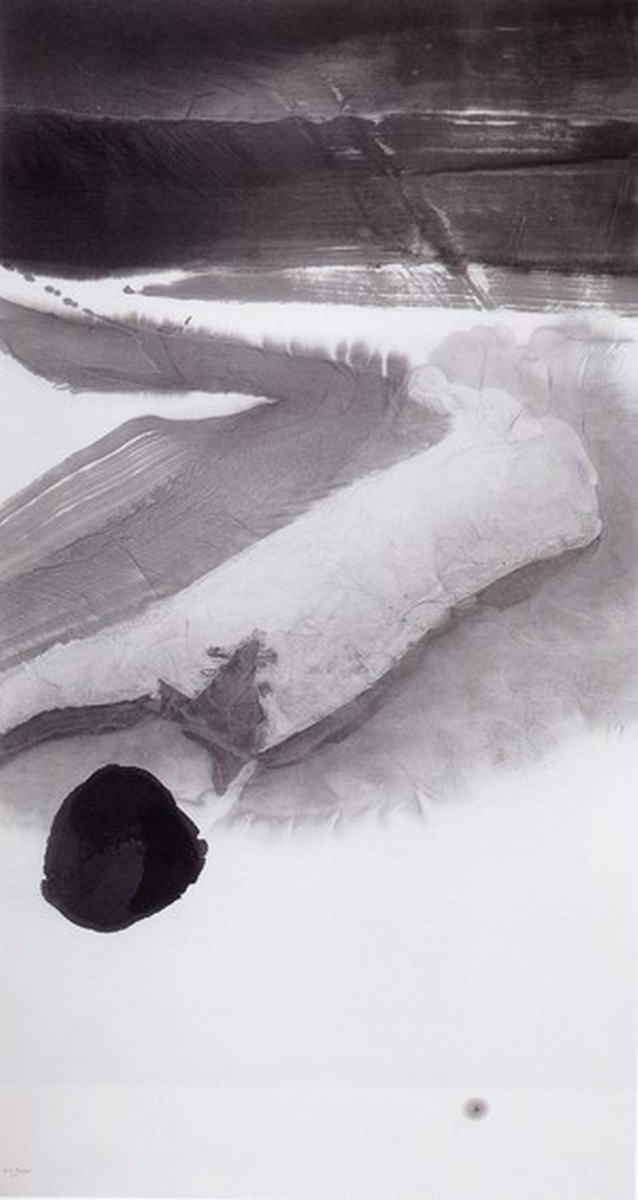