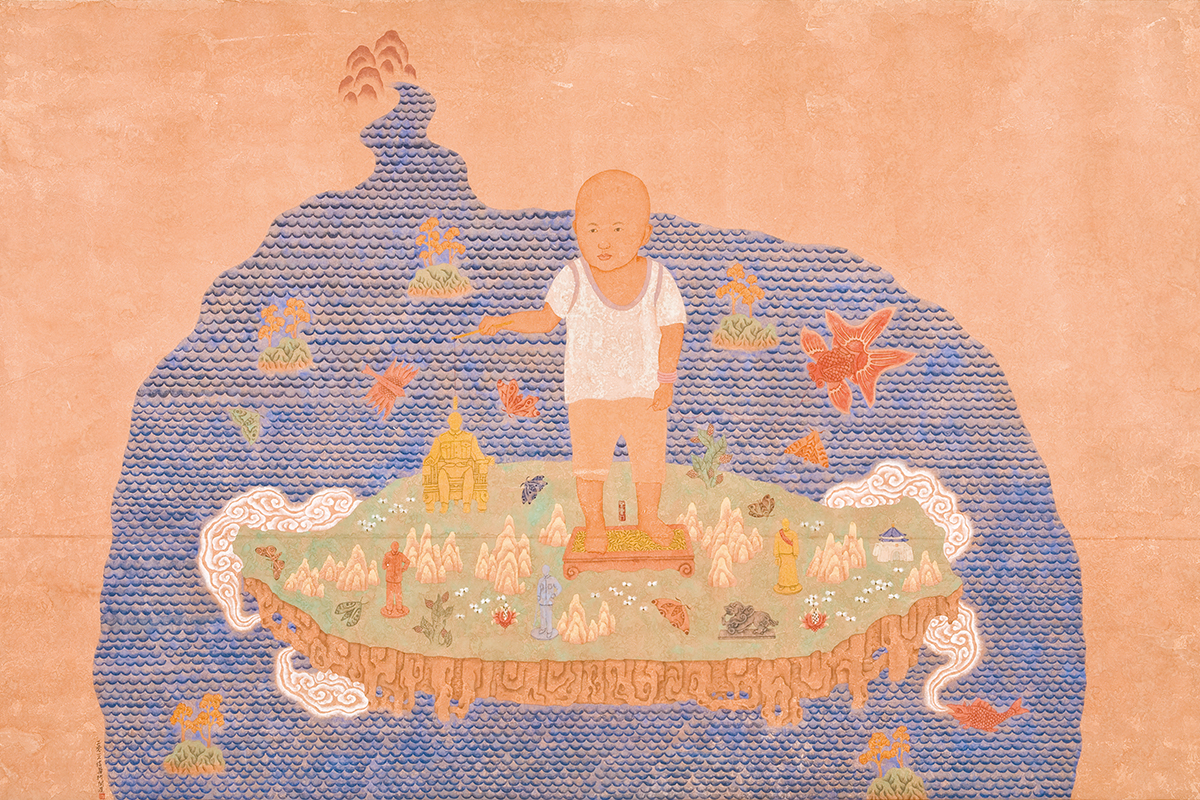 Ink painting has a long and venerable history. It is a unique art form in East Asia where it is also known as “literati painting.” With growing globalization in the late 20th century, however, it has become imperative for artists to explore new languages for their works. “Contemporary ink painting”–a novel expression that incorporates Chinese traditional ink painting and Western artistic concepts—raises not only questions on art media and forms, but also cultural and national identity. It’s with no surprise that it has been the center of attention for the past two years. Important art institutions and leading auction houses have also organized exhibitions around this art form. Pan Hsinhua, born in 1966 in Taimali, Taitung, is one representative Taiwanese artist who uses traditional ink painting techniques as a medium to reflect contemporary lifestyles in Taiwan. In 2013, he was invited to participate in the featured exhibition of the Chengdu Biennale “Contemporary Ink Painting: Ink Works from Taiwan” for his significant achievements and innovation. Pan Hsinhua’s most recent works will be on display at Asia Art Center Taipei II from October 19th to November 17th, 2013.

Unlike Chinese ink painting artists back in the 80s who put much emphasis on anti-tradition, and imitating and learning from the West, artists who grew up during the 90s are more influenced by new social structures as a result of policy reforms. Increasing exposure to Western influence has placed artists into a struggle between localization and globalization, nationalization and westernization. Seeking one’s cultural identity has become an important trend developed during this era. In terms of contemporary ink painting, it is a process of rediscovering tradition; it recreates traditions based on the perception of the moment. Pan Hsinhua, known for his handcrafted paper, continues to bring innovative ideas and techniques amongst traditions; he meticulously combines his personal insights, visual aesthetics, and mindset into paintings. Nevertheless, he maintains an tenuous relationship with traditional painting. His unique combination of art has allowed him to step onto the world stage as a representative contemporary ink artist from Taiwan. Author of Taiwan Contemporary Art Series, Professor Philip Chao-jen Wu from Tunghai University Department of Fine Arts, points out that Pan is one of the most notable ink paining artists of our generation. Professor Wu stresses that Pan’s totem-like mountain figures and complicated combinations of elements “are highly decorative and ornamental, similar to surrealist paintings of Rene Magritte and Wu Bin (of the Transformational School in the late Ming). These are combinations never seen before in Chinese contemporary ink painting.”

Upholding a delicate relationship with tradition has always been Pan’s principle in his artistic creation. For instance, the glue color painting that he has been using in recent years is an important representation of 20th century Taiwanese art as a legacy of Japanese colonization. “Even though the possibility of ink painting is limited in and of itself, one can still create something very different by seeking the greatest potentiality of composition…therefore, how to carefully handle the potential conflict and contract between technique, media, and content, while trying to reach a harmonization of all parts. These are the challenges I am facing now,” said artist Pan. The ultimate goal is to experiment with the possibilities of Eastern art media without losing the spirit of the East.

Ink paintings have always embodied strong, traditional and cultural characteristics, which give it a unique reputation in the international art scene. The future of contemporary ink painting lies in its ability to maintain a level of creative purity amidst various rising art forms. Pan Hsinhua, with his solid academic background and training, has decided to develop his own unique visual style. He tries to imbue his painting with a fleeting distance between vintage and modernity, to bring the viewers a poetic and engaging, yet whimsical, perception of art that is different from Chinese traditional painting. We cordially invite you to visit Gaze into Illusions – Pan Hsinhua Solo Exhibition to view the fantastic vision of Pan Hsinhua.

The Land Rich in Beauty

In the Middle of Water

Center of the Water

Strengthening Across the River Ⅱ

Whisper I World Above the Sky