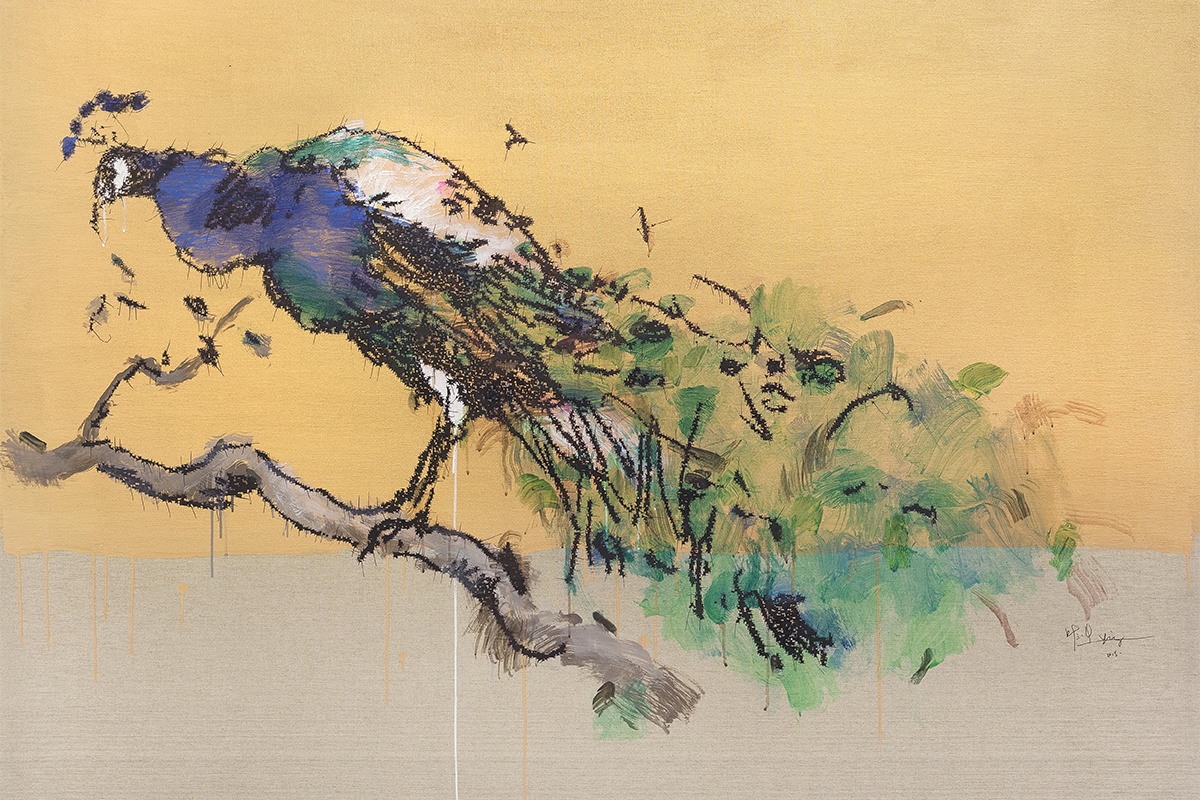 When Ye Yongqing selected the name for his exhibition as the “Gilded Age” he obviously intended to convey the signification of a certain textual metaphor. What is interesting about this is that: he uses this almost Mark Twain literary conception, to construct what he does not regard to be a macro historical critique. He humbly expresses that he himself lacks authority to critique an entire generation. The reason why I have chosen this name, is to convey his explanation of the painting peacocks: “in a gilded age of wealthy tyrants, throughout the entire summer, I travelled back and forth between my studios in Beijing and Dali, to paint and describe a lonely game- using some peacocks to slowly misrepresent the world beyond my windows”.

In fact, I have real doubts about his “humility”. Considering in context the “Gilded Age” and “Wealthy Tyrants”, they do seem to match today’s oligarchical world quite well. Even if Ye doesn’t want to “critique” today’s generation, his use of these collocations together certainly reflects a certain critical attitude. Or perhaps, it is precisely this which reflects the artistic direction which Ye naturally possesses. His are unlike the young generation, whose works take their starting points for inspiration from more practical aspects of life. But for him, these starting points do not affect Ye Yongqing’s works in their creation or instead reflect another signification. In this regard, during our discussions together we happily reached an accord and consensus. As everyone knows, Ye is famous in the artistic world for his “migratory bird” works, which are noted for their consistent fluid, dynamism and movement. So whether he selected “Gilded Age” or another theme, the process of creating his works still remains faithful to his ubiquitous techniques. Some have asked if somewhat dubiously, what is the significance of this? In fact, given the natural relations between “creations- themes”, regardless of the specific creative processes involved, they all serve to meet the needs of the theme. Hence the works themselves in their production and processes do not convey their own descriptive sense and signification. Instead, the real problem is that, Ye Yongqing consistently insists on his creative processes as implying signification through their technique. For example when we discussed the “Dwelling in the Fuchun Mountains”, which took until the seventh year of Zhizheng reign period of Emperor Shun of the Yuan Dynasty to complete, while in the 10th year of Zhizheng Huang Gongwang said the work was still incomplete, and continued to carry it with him to add elements for its ultimate completion. Since he died soon thereafter, there were no other contemporaneous explanations of the state of completion of the work. So from the remarks in the 10th year of Zhizheng it can be seen that this masterful massive creation in Chinese painting history remained incomplete, which could pose a problem for the painter. For us however, as viewers we do not entertain such difficulties or doubts. We can instead view such a massive work for its importance, as a complete piece. This kind of criticism, implies a sort of historical significance and consciousness about the completeness of the work. Thus, when we express our critique for the work, we find ourselves in an interesting contradiction with the position taken by Huang Gongwang himself. Of course, we do not aim here to discuss who is right or wrong in regard to these two opinions, but perhaps merely to remind ourselves that critiquing a piece of art may involve certain implicit conscious considerations, or cultural authority which may repress or control our critical evaluations?

For example, in today’s studio creative processes and mechanisms, should an entire work be completed in a pre-established, dedicated space? In discussing this, we can realize: Ye Yongqing’s “migratory birds” creations, reflect the passage of a spatiotemporal sense and flow of time, and which provide room for critical evaluation of today’s creation processes. For Ye Yongqing, instead of discussing the creation of his “migratory birds” and their ultimate completion, it might instead be better to appreciate a completely new relationship between his individual works and the entire repertoire of his creation. The conventional view of studios and the artist and their works create an unbearable sense for Ye Yongqing. He is unable to accept the traditional framework of being held in “captivity” when creating. For him, art should reflect a degree of individual freedom, and if artists and their work are limited to a certain confined framework, then the art simply speaking, lacks any value as art at all. Hence, his “migratory birds” reflect not merely a simple process of completing creations, but instead contemplate a sense of- self and work in relation to redefining their mutually existential independence in comity.

Ye Yongqing’s works have always had a countervailing logic of a certain “critique of the system”. The “birds” which so attract our attention, reflect a criticism of others “methods of observing”; they may seem simplistic, and free-going, and yet they use a slow, deliberate, and complex convex and suite of techniques to complete the paintings. If one were to suppose that the “birds” merely reflect a new aesthetic approach, then we will have lost the real signification of Ye Yongqing’s works. He does not intend to provide the world with a merely aesthetics standard, but to use his painting to convey a “paradox”, revealing how our artistic critique of works is really a “cognitive mechanism”. Just as with “Dwelling in the Fuchun Mountains”, which naturally has a completeness which is somehow conveyed beyond the work itself, but rather comes from our mutual acceptance of a common artistic historical conception and consciousness. Ye Yongqing’s “birds” appear deceptively “simple”, which results from our understanding and appreciation processes for our daily interaction of works in both their “simplicity and complexity”. As such, Ye Yongqing’s works signification is not produced from a simple explication of the topic of “birds”, but rather through their expressive embrace of today’s exhibition theme- the Gilded Age. Having written to this point, perhaps I have strayed somewhat from the objective of discussing the exhibition’s “theme”. So why should I use this prefatory essay to explain the exhibition’s name? It may seem that one stipulation here is akin to the studio mechanism at work, in today’s artistic production, and the concomitant exhibition system as well- we need to explain the significance of an exhibition theme, and display it in the exhibit to help the audience better appreciate the meaning of the event. But for Ye Yongqing’s exhibition, if you were to demand this kind of essay to explain his exhibition, you would also have to realize: this kind of “explanatory mechanism”, is exactly the problem. While it seems appropriate for the “Peacock Display Hall”, you will then have to face an exhibit which seems completely unrelated to the theme: which are scattered about, or complete, or incomplete, and which may even have not met with the onset of the brush and yet dare call themselves “works”.

Among these “works”, there are four which form a suite of Qi Bai-shi’s landscapes “Copied”. In respect of this suite, Ye has said he was suddenly moved to create them, and then somehow lost his patience to complete them after starting. So the four works have been “suspended” in different cities, and two have not even been begun. But when these works were hung in the exhibition hall, Ye used the contemporary exhibition system to create a new “paradox”; in a white box with a video, he allowed viewers to naturally contemplate how these were already yet complete works. Are these really complete works? From Ye Yongqing’s initial painting experiences, the answer is in the negative; but from the perspective of the viewer on the scene, the answer is a certain yes. Amid these two perspectives there is a clear “contradiction”, which is precisely the issue that Ye wished to put forth: can the significance of a work be completed in a studio, or is it completed in the exhibition space only? Or perhaps only when it is removed outside the exhibition hall and then continues to “completion”? Answering these questions, we cannot but ask ourselves these questions about our “cognition processes”. Having reached this point, we have surely realized: Ye has not intended to provide us with some standard answer, but to use the existence of the “paradox” to inspire us art aficionados to engage in “criticism of the system”. Clearly then, “whether a work is complete or not”, seems a simple enough question, but to answer it actually requires conscious consideration of the predicate issues that lurk behind our criticism. From one point of view, to provoke such inchoate cognitive considerations, is really the deep intention of Ye: appreciation this point naturally allows to deflect any answer to whether “a work is complete or not”.

After further consideration and critical reflection, we can return to this exhibition. Now, we understand how Ye Yongqing intends those aspects of the exhibit which seem at best disparately connected to the theme, and we need not be surprised at all. Because with the incomplete works appearing after the peacocks, we realize this is exactly the sentiment of the space and its “paradox” with today’s exhibition mechanism, which the painting of the birds subtly signifies in their quest for engaging in a critical discussion of the implicit “observation mechanism” of the contemporary art world. Why an exhibition requires a solidly forged unifying theme? What are the implicit assumptions behind this common custom today? Clearly, the answer implies reference to an authority mechanism lurking behind a certain cultural system. Our perhaps we ought to say that through the creation of just such a paradox, we can see how to transform our thoughts from an emphasis on “the external results” to appreciation and consideration of the “preconceived internal assumptions”, as these are the admittedly arduous challenges which Ye has remained faithful to with his works over the years. The significance therefore lies not in the resultant works, or their exhibitions, but in the discussion and criticism of their original production processes behind these works. Just as with his “birds”, the paintings are not the center of the works, rather the images movement is designed to reflect their conscious engagement with cognitive behaviors which the works seek to emulate as their true inspiration. Over the years, he has been a “Masterful Magician of Paradox”, and has used the migration of birds to “randomly” express series of artistic behaviors through painting, which continually challenge our common conceptions and cognition, while also thereby creating his own unique artistic method, which is replete in the paradoxes which create this exhibition’s own “exhibition theme”.

Strolling through this exhibition hall, we are constantly faced with the numerous levels of the “Ye’s Paradox” and his “Dreamscapes”. From the “exhibition theme” to the “works completion”, and from the “paintings creation space” to the “relationship among the artist and the painting”, to the individual expression of a work’s “simplicity” and “complexity”, Ye continually manages to challenge us cognitively with his inimitable and rich paradoxes. Facing these paradoxes, if we strive to search for standard answers, we will never be able to understand “Ye Yongqing”. His purpose is not to provide answers, but to empower a critical space for cognitive engagement.

Yellow Bird on a Pomegranate Branch

The Album Leaf of Planting Flowers

The Album Leaf of peacocks