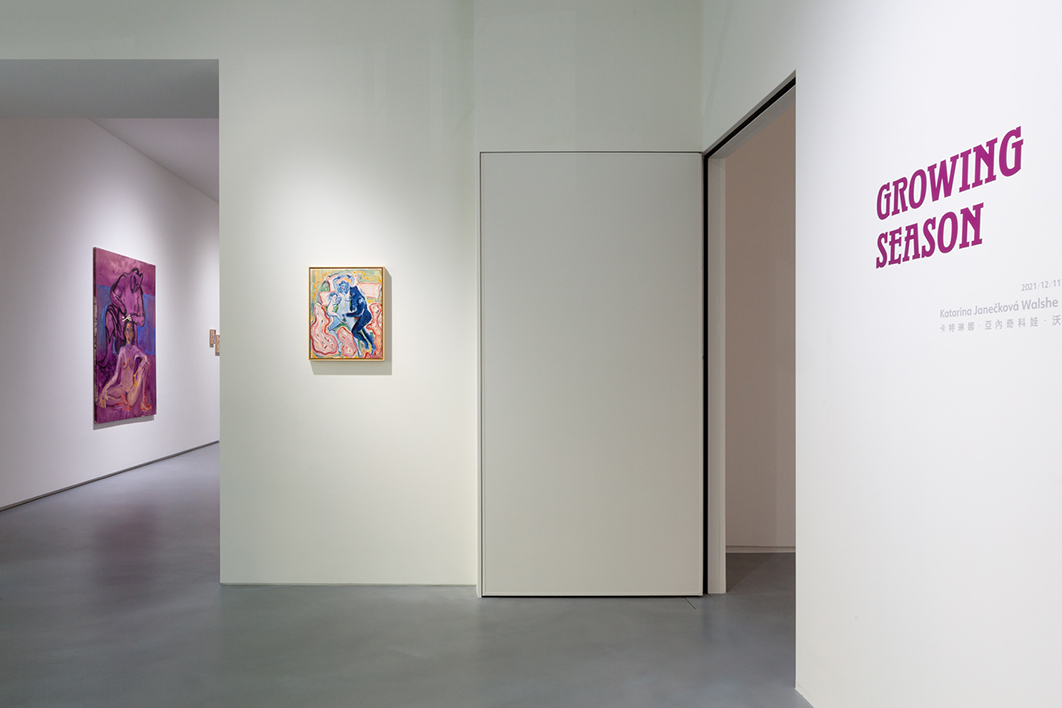 The bold and visceral nature of Katarina Janečková Walshe’s works is known to incite intrigue, often compelling viewers to gravitate towards them with a thirst for understanding. For Janečková Walshe, an independent female artist from Bratislava (capital of Slovakia), creation and life are both inextricable and mutually supportive. Over the past seven years, the artist has passed several major milestones; she obtained a Master’s degree, got married, and moved to Corpus Christi, Texas, where she found herself immersed in an unfamiliar culture with completely different values.

When Janečková Walshe became a new mother in 2018, she began reflecting on her roles as a mother and an artist, contemplating how to strike a balance between parenting, working, and enjoying her life. Over time, she began to find solace in the cultivation of intimacy, as well as competition to a certain extent. Through the solo exhibitions Janečková Walshe has held in the past two years — “Bad Habits, Good Intentions” (2020, Amsterdam), “A Secret of Happy Household” (2021, Berlin), and “The Importance of Maintaining Flexibility” (2021, Bratislava) — the artist continues to confront and digest issues of culture shock and the complexities of married life: How does one adjust to being in a relationship with another person without losing a sense of self? How much concession and compromise are required to meet the needs of one’s partner? How does one adjust to the world around them over time?

Like the artist herself, the female figures who feature in Janečková Walshe’s paintings are fit and full of vigor; she believes that women need to be strong and healthy in order to carry out the labor that comes with motherhood and being an artist. Meanwhile, the bears representing male virility are swift and fierce despite their blurred physiques, and their masculinity is visualized through their powerful fixations on the female body. The eroticism that flows through Janečková Walshe’s paintings is charged with an intrinsic, feminine sense of romantic and maternal love, while also illustrating the tensions of dominance and obedience in intimate relationships.

Janečková Walshe’s personal relationships construct the storyline that runs through all of her works, and the stories and symbols weaved throughout her paintings are extracted directly from her personal life. She faithfully records both good and bad moments from her life, as if self-reflection and self-healing are a driving force of her creative practice. In a sense, Janečková Walshe uses creation as a means of research, and she finds clarity amidst confusion and conflict through painting.

The artist once read in a gardening guidebook: “Like repotting a plant, each new graft is quite fragile in its new location. It can take a while for the graft to fully “root-in.” Breaking up the root ball with hands or a knife prior to setting the plant into the hole helps to encourage root growth into the surrounding soil.”

When she “repotted” herself from Slovakia to Texas, that fundamental shift in her surroundings impacted every aspect of her daily life, and it continues to this day. In May of this year, the Texas state government passed a new anti-abortion law that came into effect in September, prohibiting abortions after six weeks of pregnancy. Upon discovering the government’s abuse of power to restrict women’s bodily autonomy, Janečková Walshe was compelled to speak out. The following month, she curated a group exhibition called “Unconquerable Women” (2021, Austin) to advocate for women’s reproductive rights and safe abortions in Texas. The artist then donated all the proceeds from the exhibition to organizations related to women’s rights, ultimately using her artistic practice as a means of resistance.

Although the social atmosphere of Texas leans patriarchal and conservative, Janečková Walshe is determined to continue adapting, surviving, and thriving in her new environment. As she continues to combat violence through peaceful protest, the artist seeks to cultivate a more favorable and welcoming community for all, to achieve harmony through wisdom and communication.

With the arrival of Janečková Walshe’s second child, the artist and her partner were inspired by their marriage counselor to reflect closely on their relationship and to re-think their communication methods, habits, and boundaries. While there is still room for future growth, Janečková Walshe is finally beginning to “root-in” to her new environment after her initial “transplant shock.”

This solo exhibition of Janečková Walshe’s latest works at Asia Art Center unearths the artist’s thoughts, hopes, and fears, presenting a tender memento of her life in Texas. The two works in this exhibition eponymously titled Growing Season express the mutual trust, patience, and affection cultivated in intimate relationships through the act of cutting each other’s hair. Janečková Walshe has courageously raised her children in a foreign environment while simultaneously trying to retain the emotions and traditions of the environment she grew up in. With each passing year, the artist continues to develop into a stronger, more mature version of herself.

Bearable lightness of being

A guide for cowboys about how to treat a woman

Seeds of my thoughts, streams of my love (painting)

Shower talks to my wild self

Portrait of a mother I

Portrait of a mother II

Reading into each other

What bear’s dreams are made of II

What bear’s dreams are made of III

Still-life of a choice

Safety blanket of the wind

Until we meet again

Origin of my world

Open up to me

Seeds of my thoughts

What bear’s dreams are made of I