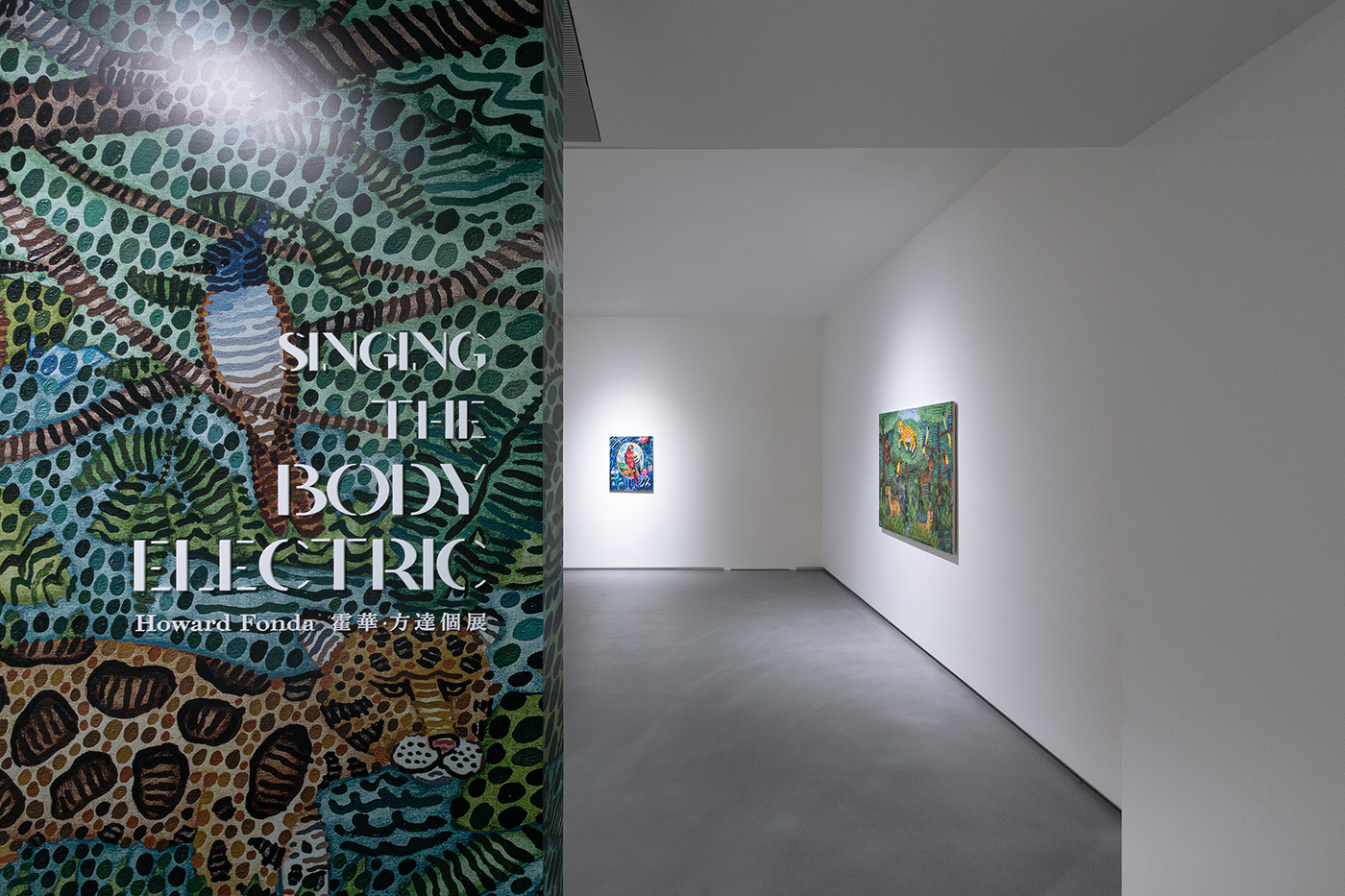 A tribute to “I Sing the Body Electric,” a poem by American poet Walt Whitman from his poetry collection Leaves of Grass, Singing the Body Electric is the first solo exhibition of American artist Howard Fonda (b. 1974) in Asia. Whitman’s poem, written in 1855, encapsulates a love and longing for the body, praising the wonders of the physical being, and pleasures of the flesh. It lauds the oneness of all people, which is experienced through corporeal connection — an idea that Fonda finds resonates with his own artistic practice, where he aims to examine and perceive other cultures, lives, and historical narratives with empathy and beyond the binary.

Childlike and vivacious, Fonda’s polychromatic work embodies his particular painting style, which leaves a distinct impression, while profound philosophical contemplation underlies the jubilant, guileless facade. Concerns for history and the environment, as well as his thoughts and responses to artistic theories are carefully juxtaposed in his work. Visual symbols imbued with the artist’s musings disperse throughout the work, awaiting scrutiny that reveals connotations.

Art making, for Fonda, is an investigation: His realistic depiction of the subject echoes a specific species or context in real life. Take for example his paintings of butterfly specimens, horse illustrations, or different animals in their habitats. We can always recognize the creature’s physical characteristics, even articulate its name. Each scene, captured through his lens, exudes intrinsic significance. Viewers are guided by the artist’s visual symbolism in their pursuit of a deeper understanding of his paintings, despite the artist’s candid decision to name them “Untitled.” In reflexive contemplation, Fonda invites viewers to reinterpret the cultural and environmental fables concealed within his work: to immerse themselves in the silence or commotion that suffuses the microcosm under his paintbrush, to absorb that visceral connection one feels in “singing the body electric.”

Defined by dynamism, Fonda’s loose, directional brushstrokes coalesce into ingenuous compositions, the outline of his subject obscured, a two-dimensionality made pronounced. Straddling the abstract and the figurative, his work is invested in a knowing visual equivocality. The binary logic reigns no longer, the artistic dialectic confronted. For the artist, every perspective is valid, the existence and understanding of everything an experience, indelible and incontestable. His creative process is one of liberty and prudent thinking; every work is the culmination of dialectical experience and imagination. Painting, for him, transcends the manual act of painting, and becomes a vehicle for self-realization, a vessel that carries his thought, his psyche.

Howard Fonda, born 1974 in Syracuse, NY, U.S., graduated in 1998 with a B.S. degree in history and fine art from the Nazareth College of Rochester, Rochester, NY. In the same year he studied French literature and history at the Sorbonne University, Paris, France; and visual art at the School of Visual Arts, New York, NY. He received an M.F.A degree in painting and drawing from the School of the Art Institute of Chicago in 2001. He was an instructor at the School of the Art Institute of Chicago between 2001 and 2008. He currently lives and works in Scottsdale, AZ, U.S.

Fonda has exhibited internationally, including in Munich, Brussels, New York, San Francisco, and Los Angeles. His work is housed in the collections of the MoMA, New York, and Museum of Contemporary Art Chicago. He is a visiting lecturer at numerous renowned schools, including the School of the Art Institute of Chicago, Rhode Island School of Design, University of Texas, and Academy of Fine Arts, Munich. 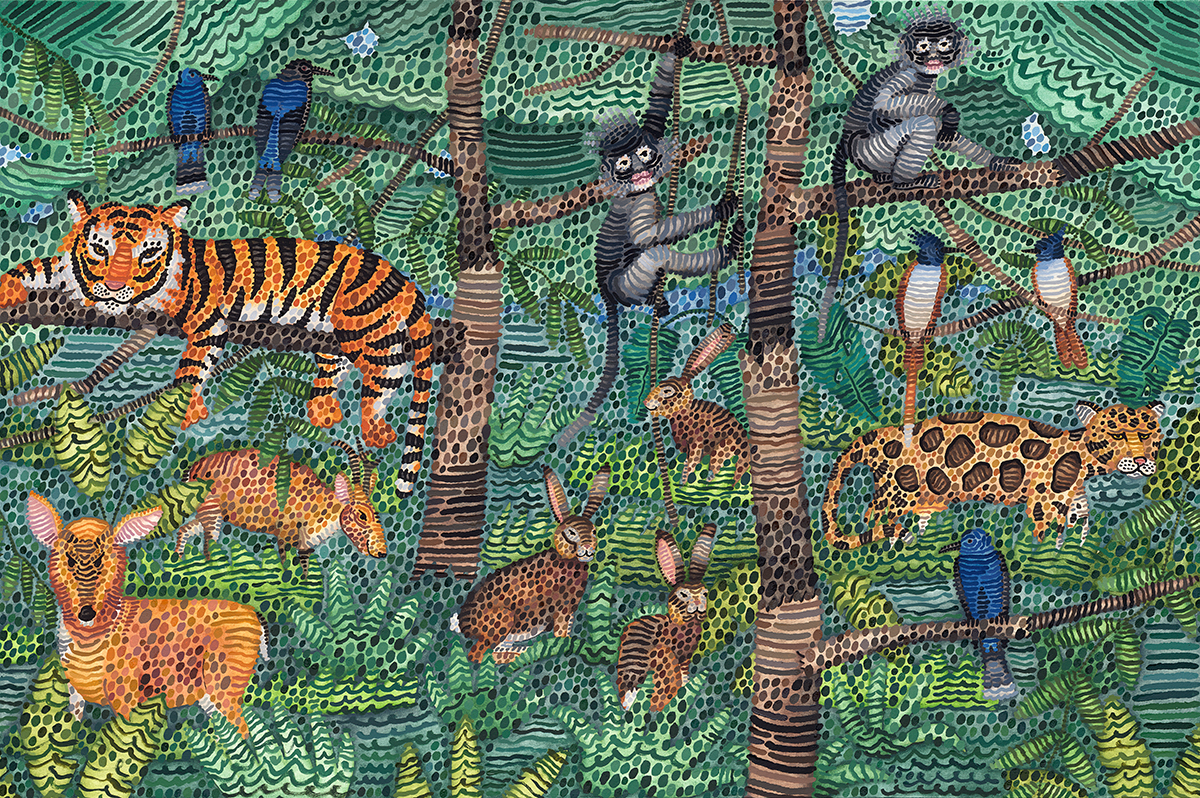 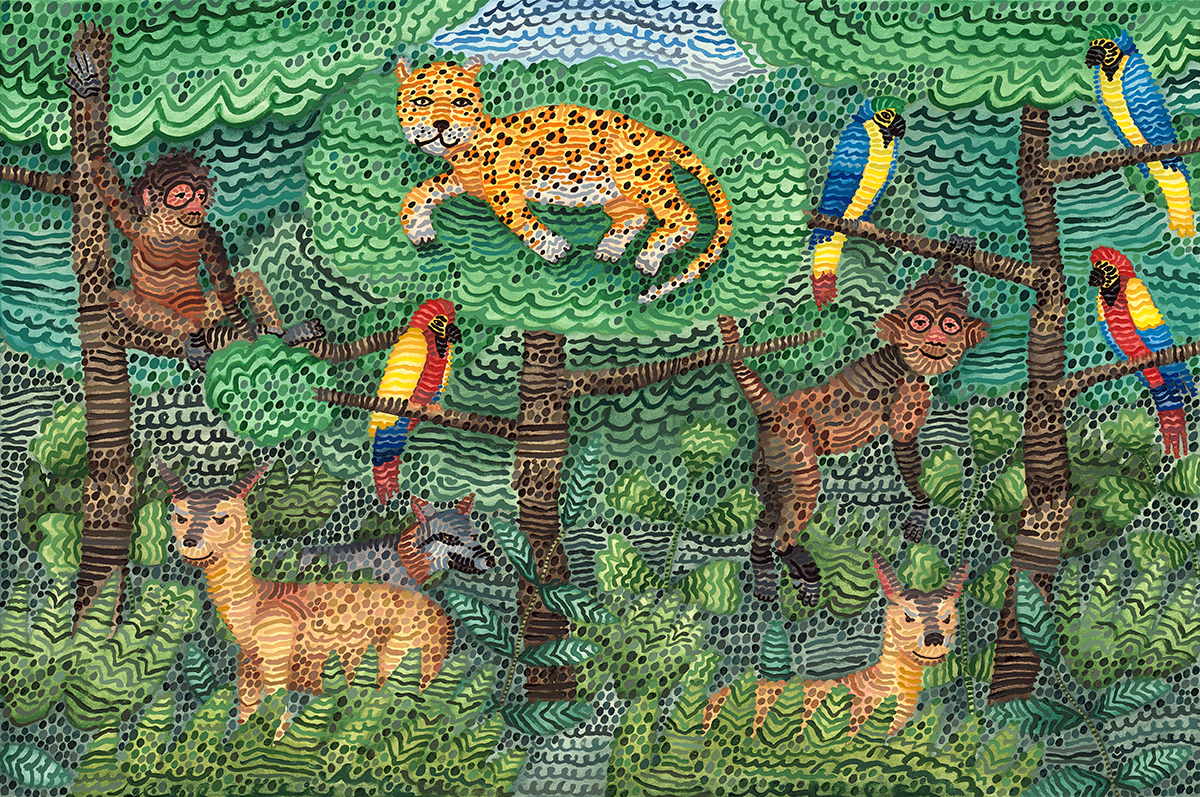 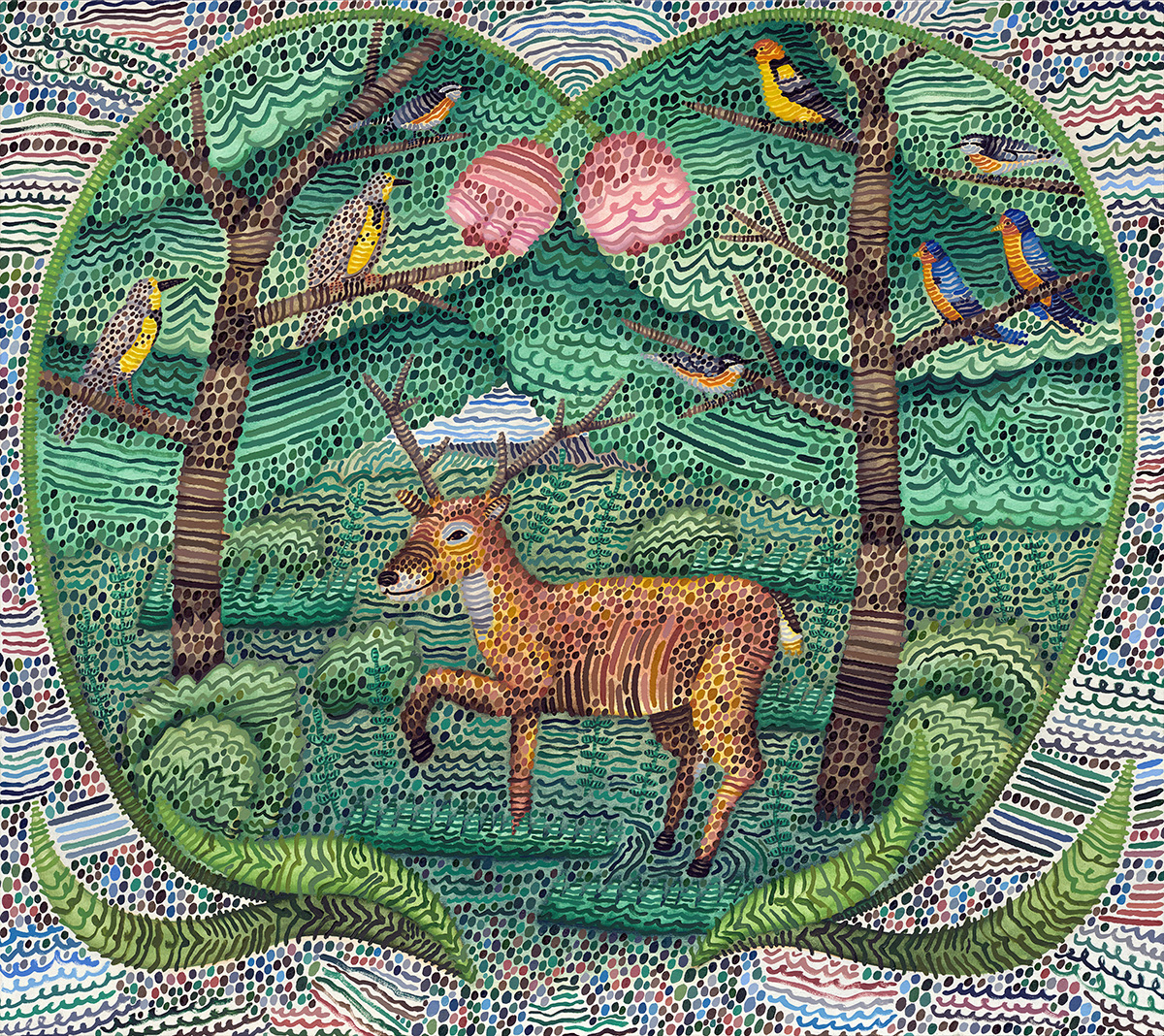 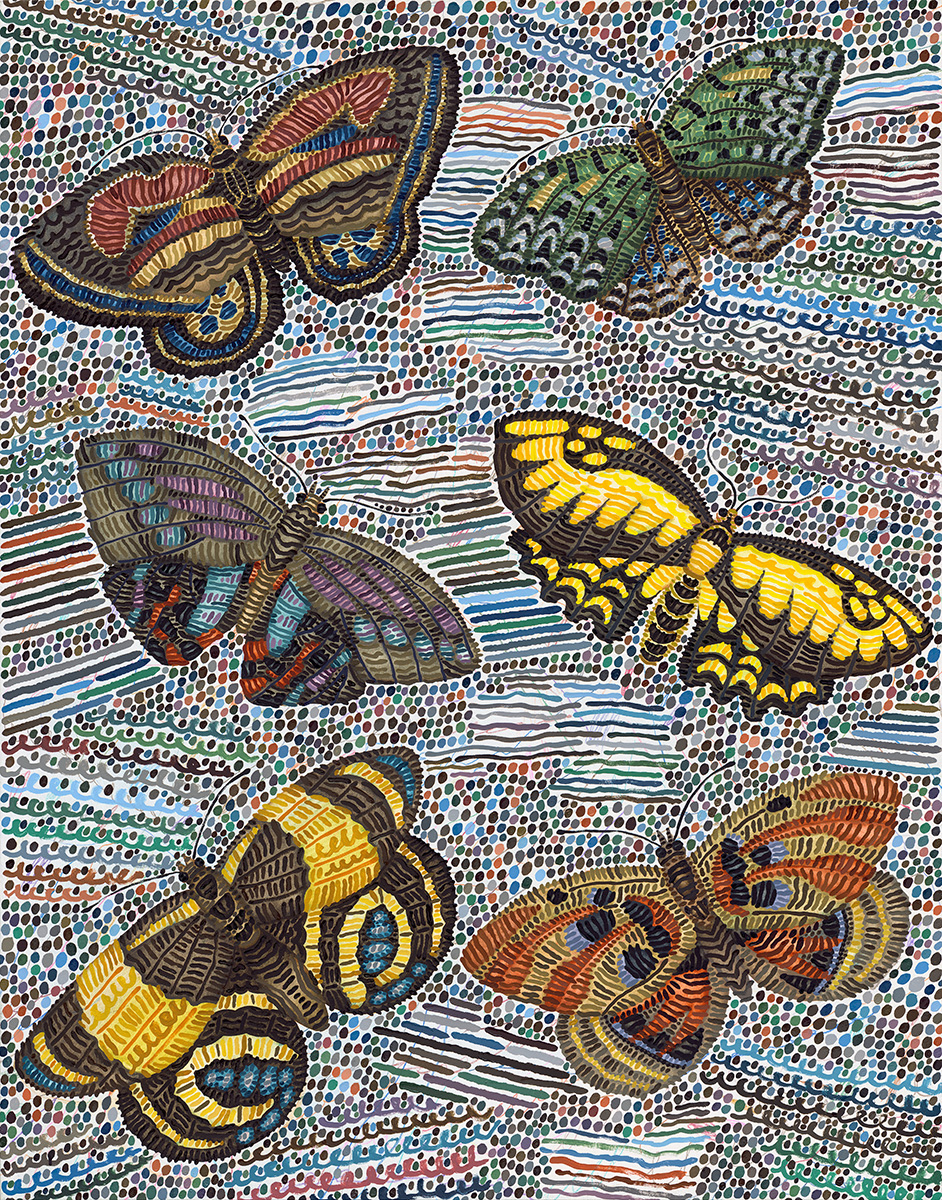