Jiang Ji’an’s art can be summed up as representation in which he engages upon systems of representation. His artworks present modes of re-presentation as re-presentational content. In each phase of his art practice, which has gradually expanded its scope from the beginning of the 90’s all the way to the present, the artist highlights the issue of re-presentation synecdochially through specific examples. He generates a cogitative dimension through intuitive visual experience. Hence, the art he makes is characterized by sensory introspection and self-referential reflection. It regards “reality” as a pre-established order. Therefore he treats the “real” as a kind of art whose status is pending.

Two Room Flat was an installation made by the artist between 2007 and 2009. Using black-and-white drawing technique he covered a two-room space and everything in it with shading effects commonly seen in painting. He assimilates “reality” to his painterly, trompe l’oeuil re-presentation, yet his purposefully disordered relations between light and shadow continuously cause the spectator to doubt this re-presentation of “reality”. Jiang Ji’an’s paintings transport us into the mutually derived relations among medium, image and object. For example: silk fiber is rendered into colored ink; this ink, in turn, is used to depict a silk-scroll painting upon silk fabric; the residue of the silk from ink-making is then used to make a miniature model of the depicted object, constituting a poetics of palindromes.

In his most recent paintings, this kind of “re-presentational poetics” has introduced an even richer vocabulary. Footprints of cranes, shadows of trees, shapes of bugs—all these visualizations of traditional Chinese pictorial themes are depicted as silhouettes across a wrinkled piece of silk cloth, which is itself a depiction. At the same time, these silhouettes help give form to a trompe l’oeuil effect whereby one piece of silk fabric seems to overlap another. Not only do they constitute traditional images, but they’re also shapes of objects in the painting, as well as a re-presentational means.

This exhibition emphasizes Jiang Ji’an’s grasp of the relationship between objects and their re-presentation, that is to say, between the object and its “shadow”. The object isn’t the basis for the shadow, and the shadow is not a substitute for the “object”. People think they’re looking at the truth, whereas they’ve only encountered a shadow: we can “correspond to the object” (yingwu), yet can only engage in an “encounter with its shadow” (huiying)

Snow Boiling on the Winter Stove

Simmering Rainwater amid an Autumn Breeze

Cooking Under the Pine Trees Beside a Moonlit Brook 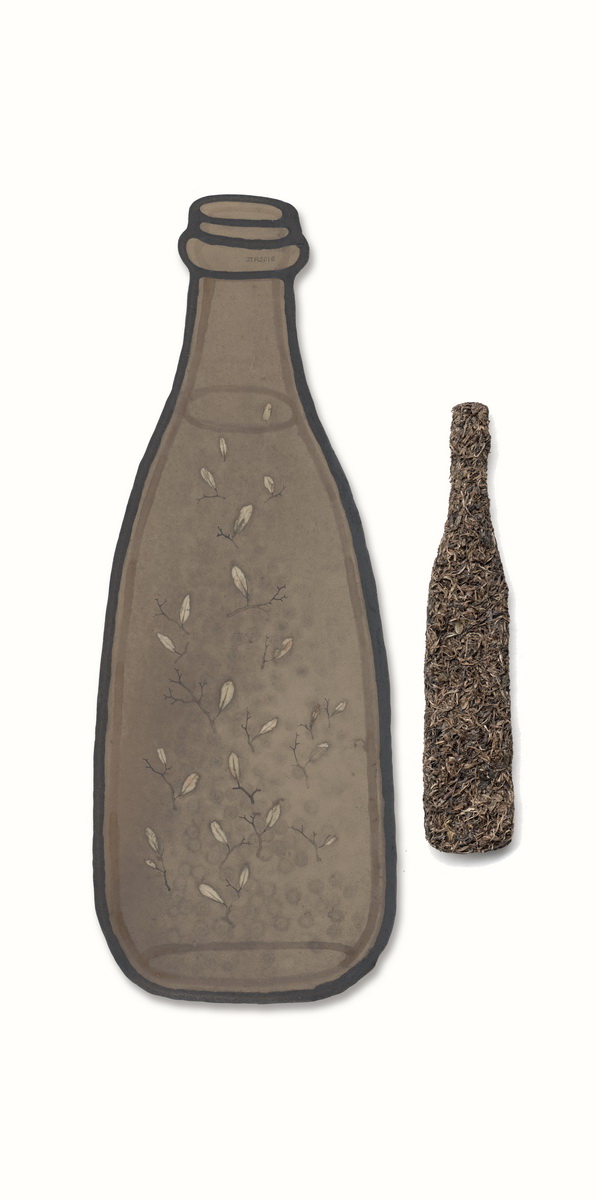 Floating in a Secluded Bamboo Grove