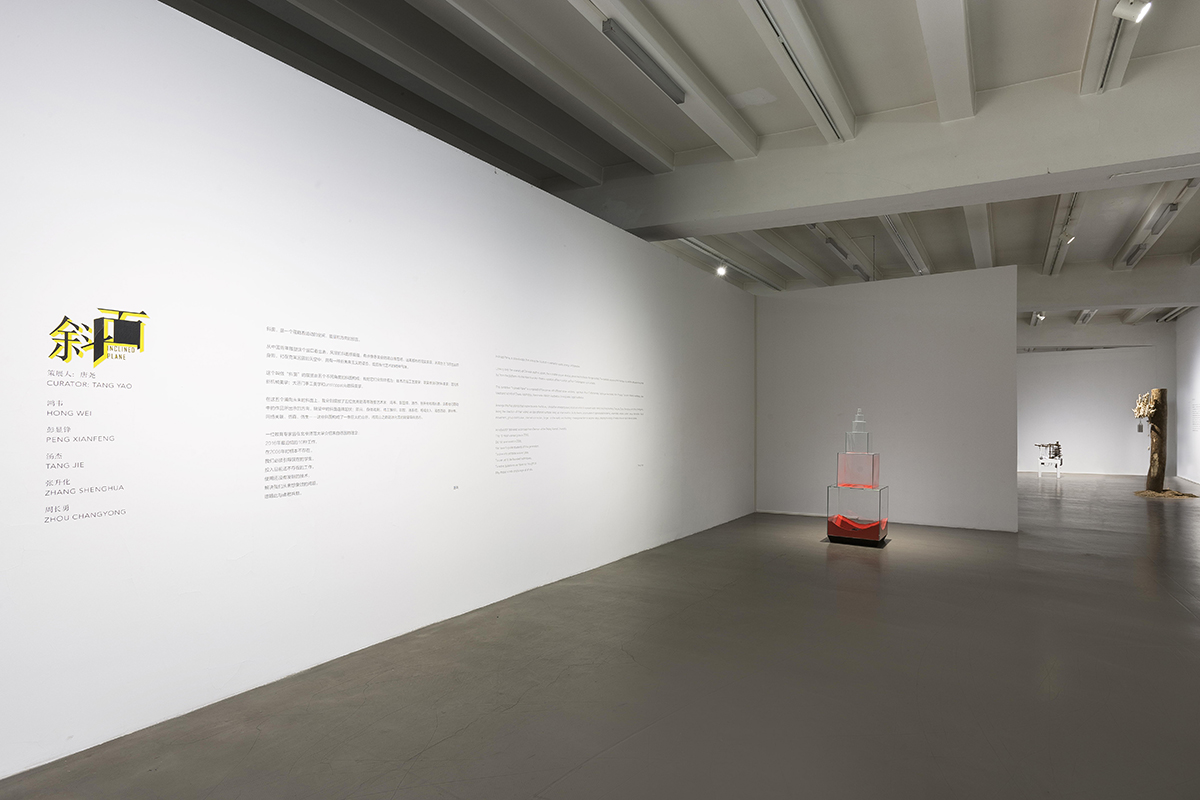 Inclined Plane, is a landscape that shows the future of movement in space, energy, and direction.

Looking over the scenery of Chinese youth sculptors, the inclination is quiet obvious, almost like the Winder Olympic ski field. The spectacle sets away from the hazy city, and the silhouette that jumps out from the platform into the Klein blue sky…there is a posture of Neo-futurism, or Post-Contemporary spiritual taste.

This exhibition ”Inclined Plane” is composed of five planes with different slope variations.

Amongst the five planes that incline towards the future, I chose five emerging young sculptural artists to represent each:  Hong Wei, Peng Xianfeng, Tang Jei, Zhang Shenghua, and Zhou Changyong. Along the direction of their works we see different surfaces lining up: improvisation, bodily theatre, accumulation of sophisticated rendering, uncontrolled, organic system, venue intervention, liquid movement, group distribution, internet connection, forgery on the reality and the living…these planes form to become valleys, directing the energy of melted snow on top to faraway places.

Last week, an educator delivered a concept from German at the Beijing Normal University:

The 10 most wanted jobs in 2016,
Did not even exist in 2006.
We have to guide students of this generation,
To dive into yet to be existed jobs,
To use yet to be founded techniques,
To solve questions we have not thought of.
May these words encourage all of you.

His “Debris and Balance” series in the plane of “Aesthetics of Post-Craftsmanship Technique” is a perfect example for a 3-step trilogy. First step: Construction of high-end technology. Through years of arduous and even dangerous experiment, he discovered an unprecedented glaze color. His work was even selected to be displayed in Barack Hussein Obama’s Presidential Suite during the Beijing APEC.

But one needs to express more than that.

The second step: Postmodern deconstruction and re-combination. Hong dissected the original structure into parts and combine them with other materials, in order to seek a new balance in craftsmanship between traditional and modern materials.

Fragmentation is one of the most prominent features that we foresee in the future. It does not matter you choose to embrace it or avoid it, such fragmented, pinpointed, group distribution of knowledge, thinking, creation, broadcasting and the effects, would all become necessity in our lives.

Hong Wei broke his graceful porcelain, in shattered glory, he completed his third step: re-assembling pieces of Post-Craftsmanship. Between the traditional and the present, in-depth and shallow, creating and consuming, heavy thinking and instant texts on the screen, mass information and concentration, can we develop an ability to balance all impacts?

The keyword here is “re-assembling”. This comes from the artist’s intuition, his Post Contemporary turn.

Movement is the essence of the universe.

We can almost sense a stronger fleeting quality in our future lives. It will no longer indicate some philosopher or spiritual masters’ epiphanies, but everyone’s reality. We will be living in a virtual world of light and endless information. The books we read will be open to the editing of different readers and interpretations. The movies we see, music we listen to, and games we play are digital works that are constantly changing and evolving. Even the environment of our home is replaced by Naked-Eye 3D immersive experience.

In short, the material, space occupying, stable, and the unchanging worldview will be challenged. You will realize that things (not objects) are nothing but fleeting moments. They can no longer be possessed. The relationship between you and the things becomes temporal, and it requires an almost Zen concentration to feel and appreciate them.

The rainbow and bubble cloud of Peng Xianfeng point towards a non-physical, transitory aesthetics: the solid objects may diffuse into liquid, air, light, wave and energy field. These are ephemeral sculptures. Behind the public-pleasing sculptures, there exist a spiritual philosophy of Zen and poetic in playful and theatrical presentation.

The materials and development have begun to take some Futurism tendencies and characteristics: de-solidifed, dematerialized, fluent, open, instant, in-progress and can be intervened. What I can sense is, the system will develop from single system into multi-level complex one. The non-physical materials will continue to push for mobility and changes, which may give rise to organic lives. Open to intervention shall invite more public to engage, like a wetland, sculptures that are self- sustained which continue to grow and evolve, is very likely to occur.

In the coming of new century, the power of technology will become the dominant force of human civilization.

Blind superstition and blind rejection are both no desirable.

When the network divides mankind into smaller groups and individuals, while the connection continues to expand and becomes boundless, chaos, randomness, natural, life, universe and even poetic quality, shall become the core, and highly-discussed, vocabularies, in the future.

Shu [Brief] and Hu [Sudden] saw Hun-tun [Chaos] is dead, tried to save him, “Hun-tun is not a human,” they said, “it is natural that he does not have seven openings, let’s try to mend it.” Each day they blocked one hole, and on the seventh day, Hun-tun came back to life.

Tang Jei’s work is an artistic statement on chaos resurrection, a rather inspiring new mechanical aesthetics—they are physical, mechanical, yet their representation is the exact opposite of highly precise mechanical aesthetics, instead, they emphasize a randomness which is non-calculated, non-utilitarian, non-controlled, and non-subjective.

“Red Dust” is a typical chaotic system: the red sands in the glass bottle will be blown towards the top, a portion of it can pass the holes up reach the space above. In the beginning, more sands reach the top as density is high, as density decreases, chance and speed of going upward reduce as well. This is an inevitable circumstance, but when we consider the fate of each individual sand, at what time they will go up, it all just pure chances.

Natural evolution is about the same as well.

“Which Way” is a more ambitious expression on culture, the black circular element carries reference to ontology, and the Stonehenge comes from The Yellow River Map in China. The Yellow River Map and Lo Shu Square both are ancient Chinese concepts about the universe and the balance of numbers; they share a common origin in Chinese mythology and philosophy. Tang Jei’ s “Which Way” includes circles, flowing water, natural stones, river map and floating light. Light that brings life into dark body; it flows in the direction of water and returns, it randomly pauses, and naturally extinguishes.

This is Tang Jei’s distinct “Grand Poetic of the Universe”.

The future must be a generation of machines and artificial intelligence. The internet is already able to connect us to the world while we are physically at home. Artificial intelligence and machines will help us to achieve all kinds of services. Commercial goods and works can be mass produced, which makes almost everything free: artworks become products, which then become free goods. Yet, it also means that we shall give new definition to the personal, irreplaceable, limited, handmade objects.

Zhang Shenghua is the rising star of Academy of Arts and Design of Tsinghua University. In my opinion, his significance lies in Post-Contemporary presentation. Just like postmodernism challenges the eliticism of modern art, Post-Contemporary turns to the over-dominance of conceptual and criticism in contemporary art scene.

His work belongs to an organic, even lively, machine.

The wooden handmade gives out an idyllic quality, yet it carries the sophistication of exquisite watches, with circulation rate calculated by computer. This self-powered “clock” has a 80-year scale as its life span, but the truth is that it cannot work that long because it is a handmade wooden watch. The humidity, temperature, and damages all contribute to variables. To some extent, it only has one life.

This is a mixed feeling as the artwork reminds us of agricultural age to industrial and all the way through digital age. In the walk of human civilization, with our instinct of labor, working, and desire for happiness, we re-shape the value of handmade objects that transcend history and reality.

I’ve always had a feeling that a new age of digital sculpture is coming. Sculptors of our age will dive into such new field. Since we have no other choices, why not embrace it! The future of our living space will be open, moving, and engaging…digital sculpture and design will become the visual backdrop and force, whether it is an illusion or real.

This is the future coming. The one who stands at the door of digital and internet art shall gain insights into future aesthetics.

Zhou Changyong is a distinguished digital master in the field of Chinese sculptural scene. He is a former Navy captain and studied under artist Sui Jianguo. He is also in charge of the graduate project on Digital Sculpture Promotion at the Central Academy of Fine Arts. However, Zhou Changyong is more than a 3ds Max or ZBrush master, his work employs not only 3D modeling and design software, but he aims to convert humans’ relationship with the environment and the Butterfly Effect thereof, into visible result formed by sculpture through virtual reality technique, and through which Zhou achieves a digital narrative on systematic cultural philosophy and relational aesthetics.

Tang Jie Dust on Top of the Tower