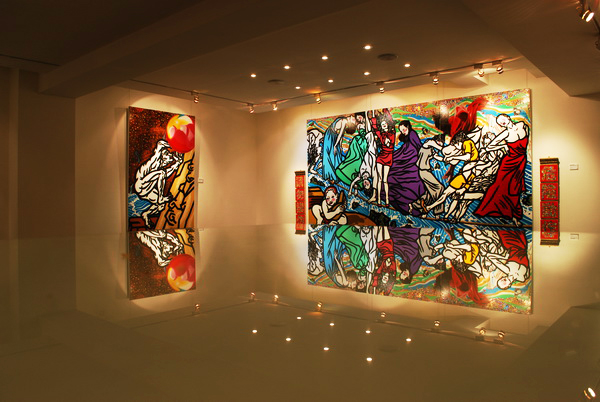 J.C. Kuo was born in 1949 in Lugang, Taiwan. Since 1980s, J.C. Kuo uses his striking stroke to describe the disorder of Taiwan society and develop his own unique painting style. He uses characteristically heavy and bold black lines, juxtaposed shapes and images, and traditional ancient stories to produce a strikingly colorful style to describe Taiwan vividly. In his painting, he articulates the phenomenon of the turbulent overlapping of ancient and modern history and Chinese and Western culture through the method of temporal juxtaposition. His painting style which arose from his personal self-awareness and experimentation has a strong style of expressionism. He uses this way to discover the collective psychology of Taiwanese. For Kuo, his paintings are the media to express his observation, imagination and criticism for Taiwan.

Instead of being an ontlooker, Kuo tries to walk into society and do the research about Taiwan with his exquisite observation. He uses post-modern way to depict the diversity of Taiwanese culture. In recent years,” balloon” is his new painting image to describe Taiwan. In his large painting “Totem and Taboo – Floaters(2007)”, he depicts young men and women full of vitality. Brimming with physical energy, they exhibit a vibrant, attractive physical condition and form a ritualistic rhythm of group dance. In this painting, he uses the image of balloon to symbolically refer to the current state of Taiwanese society, which means the collective psychological state of anxiety that commonly exists in Taiwanese society. His latest master pieces will be displayed in Asia Art Center(Taipei) in his 2009 solo exhibition “Before &After 2008 – Floating.” Kuo’s paintings will lead us to find a way to seek for the inner peace as well as identity of ourselves.

The Fable of Happiness

Sisyphus and the Ballon

Wonder In The Sky