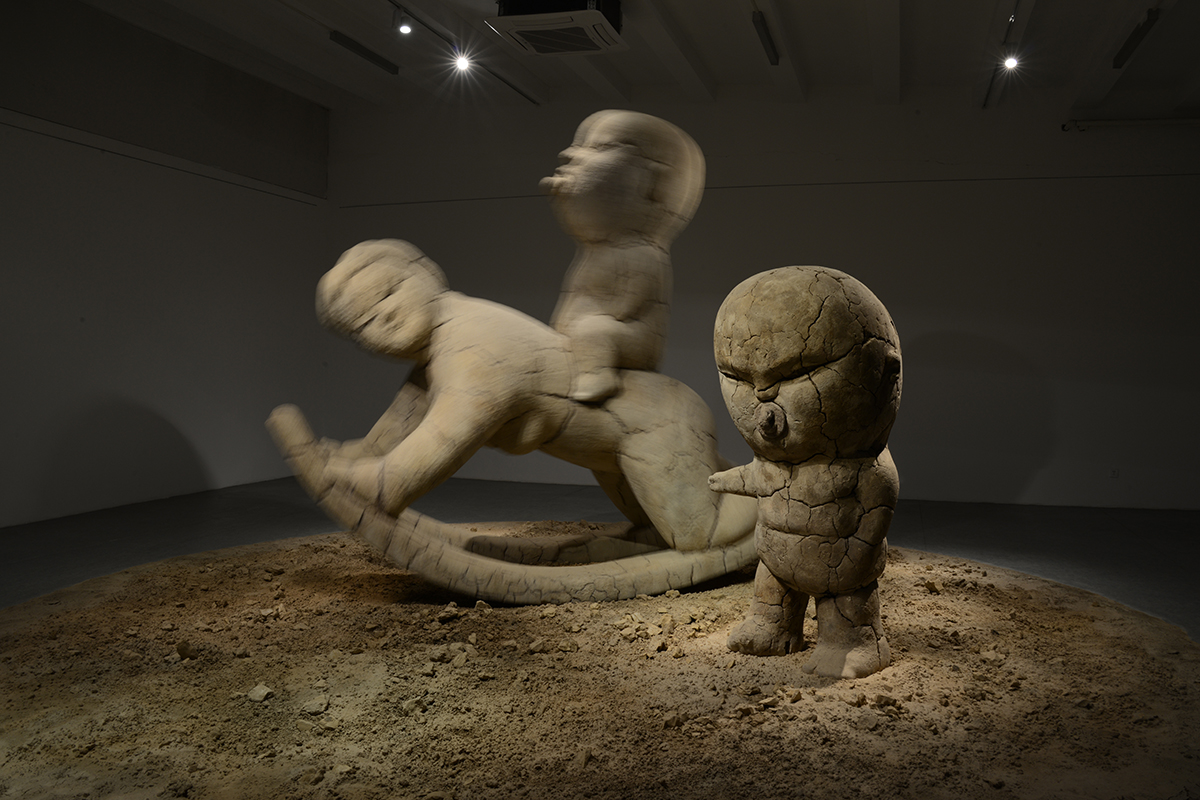 Characters in Li’s works wander between the heaven and the hell, which resembles the obsessed interrogations of the God and the Devil in Johann Wolfgang von Goethe’s The Tragic History of Doctor Faustus. In this way, they examine and reflect critically on the loss of the soul and morality in the current of material desires in contemporary society.

Once we are familiar with the dark black surface and the creative idea of lightness and weight in Li Chen’s works, viewing Li’s sculptures while pursing spiritual pleasure will become a kind of habitual response. In Ordinary People series exhibited this time, Li turned to characterize all walks of life, which sought to face the weight of reality. While Li takes pleasure in Spiritual Journey Through the Great Ether, he still returned to the most primitive mode of exploring the foundation of human nature, experiencing the virtual and inspecting the real at the same time.

In the near decades, Li has spent most of the time carrying out his reflections on human nature in his creative works, thus started the Ordinary People series in 2010 that further reflected the artist’s extensive spiritual contemplation. Yin Shuangxi, Professor of Central Academy of Fine Arts and Vice Chair of China Sculpture Institute, also the curator of this exhibition, remarked, “in this exhibition, we shall see Li’s resolution to transcend the self and the success of the style of his sculptures. His works move beyond formalistic beauty, devotes itself to the concerns with the mental state of contemporary people, and thus, Li introduces time and change into his sculptures, and creates the simultaneousness of the permanent and the transitory…He makes us look longer at the reality of things and think over the long thousands of years to see that the rise and fall of all the things in the ancient time will turn out to be dusts and ashes.” The premiere piece of sculpture in the Ordinary People series was “Boundless Desire”, which measures seven meters and exaggerates the presentation of an aggressive and forceful power of desire.

Ordinary People series presented the imperfection of human nature, which is not only a sense of “weight”; rather, the tricky artistry lies in the arranged cracks that express the complexity of the mind. This yellowish brown clay demonstrates a homeward journey of the dusts and ashes. As for the crumpling and cracking, they are the scars of years, troubles, and contemplations. After all, the cessation of being does not end in termination but in the totality of one’s barrenness. This explains Li Chen, as an artist, in addition to paying attention to the sculptural language, is even more concerned with the expressiveness of inner world. In this new generation, the modern sculpture from the West has influenced profoundly the history of Chinese sculpture. The possibility of sculptural art of being closely connected to the mental life of human life is reevaluated, and Li Chen can be rightfully named the representative figure of contemporary transformation of sculptures from concept to form, and then space.

More importantly, these transformations never stray away from Li Chen’s central character. Perhaps pursuing a more elevated spirituality enables man to face his own scars. Only when the critic keeps a critical distance from things with a simultaneous sense of contradiction can he exposes his wavering stance. According to Yin, “in my opinion, for more than twenty years, Li’s sculptural creations has moved beyond the transience of the mundane world and guarded the lasting burning of man’s passion. Those works not only confronted the very essence of reality but also abounded in lofty ideals.”

After all, Li is himself a traveler in the mundane world as well, so, “in this journey about knowledge and knowing,” Li said, “we are drown in the ‘sluggishness’ of information while our souls remain unrefined,” and thus naming the exhibition “Journey of Solitary Existence “.