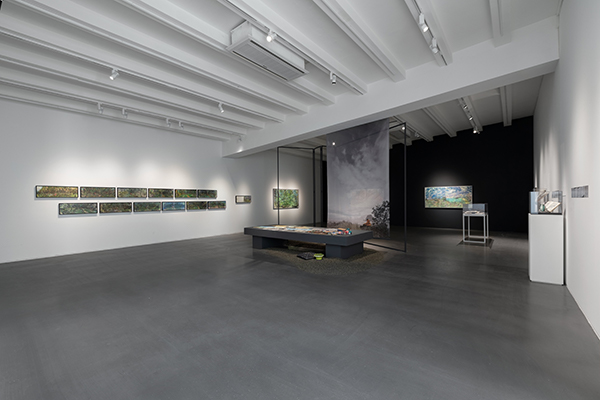 Asia Art Center announced that  “Li Yushuang Solo Exhibition” will be held from May 16th to July 5th 2020, presenting the latest works and early masterpieces of artist Li Yushuang. Curated by Fang Zhiling, this exhibition comprehensively combs the results of Li Yushuang’s artistic exploration for more than 60 years, thus for this time it will display more than 30 works including oil painting, ink painting, sketch, manuscript and other forms. As an 85-year-old artist of the older generation, Li Yushuang is one of the few artists in the art world who regards sketching outdoors as a part of life and insists on taking nature as the subject. The background of science and engineering knowledge has prompted him to integrate perspectives of natural science while sketching, thereby forming a unique set of observation methods and painting systems, which is as Li Yushuang called “light coding method”. With a sight of detached secularity, he observes at mountains and rivers of the world. His landscape showcases a natural charm of Chinese ink painting, which seems innocent while self-contained, with both changing colors of light and shadow as well as flexible and dynamic brushstrokes.

Li Yushuang, the eldest son of Li Keran, is a renowned master of traditional Chinese painting. In 1948, Li Keran brought him to live in Beijing. He was often at his father’s studio at Central Academy of Fine Arts and was in turn exposed to the classical academic painting style there. Li Yushuang, however, eventually enrolled in a national vocational-technical school to study tool manufacturing. He spoke of his reasons: “first, it was just after the War of Liberation and everyone had a particularly progressive mindset, and the school claimed that the socialist infrastructure relied on us if we enrolled… second, the school was funded by the government so it provided food, accommodation, and allowance money”.

Painting, however, remained Li Yushuang’s sole passion and love. Li Yushuang began his own sketching practice since the early 50s. In 1956, Li Yushuang was assigned to a mechanical manufacturing school in Zhengzhou. The school and its surrounding parks and villages became the subject revisited again and again in his 10-year “landscape painting” practice in Zhengzhou. Since Li Yushuang did not choose the path of “art as a profession”, his father Li Keran became his true mentor and peer in art. Nonetheless, Li Yushuang did not choose to practice Chinese painting but instead opted for “sketching”, “watercolor” and other “Western” art media. Li Yushuang’s landscape painting in the 50s and 60s were profoundly influenced by 18th and 19th century European landscape painting. Li Yushuang’s “landscape” paintings have a movingly serene and delicate nature to them in addition to the bright and passionate quality.

The school in Zhengzhou closed down in 1965, Li Yushuang along with his family moved to Kaifeng. There, he began his work as a grinder at the high pressure valve factory. He lived in the living quarters in the factory right next to the crop fields. There were crop fields and trees right outside doors, and they were surrounded by rural landscape. These places, along with the Longting Park, Erseng Temple, Yuwangtai and even old streets in Kaifeng became new landscape painting spots for Li Yushuang. In Kaifeng, Li, a physicist, began studying the universe and human brain, making many models of light and vision as well as conducting experiments on monocular and binocular vision. Through these experiments, he realized that painting is meant to portray “nature as I view it and not as the objects themselves”. During this time, he began to generate his unique observational techniques in “life painting”. As Li said, “First, I never view them as a tangible tree or a house, I see them all as two-dimensional codes existing in nature. It can be utterly muddled inside, including its colors and lines… Overall observation is key without focusing on any particular aspect to blur out everything… Once you place the object in the center of your field of vision, right in the most sensitive spot, it then all becomes clear; my paintings are cohesive as I view nature as a whole. I believe the fundamental principles of paintings are when paintings only reveal a disarray of colors and shading without clear distinctions of trees or rivers”. In this regard, Li Yushuang calls his new technique “coding method”.

The new painting method freed him from rigorous composition and shapes, Li then turned to focus on the intricate messages conveyed through light and color. Since then, Li Yushuang has spent his life – from Kaifeng to Lushan then finally Beijing, from watercolor to oil painting then eventually acrylics and ink – to practice and perfect this method. Many of his paintings began in Spring and continued to Summer or even Fall. If it is not completed this year, it shall be continued the following year. A painting may take years to finish since there’s a story behind each. In the 80s, Li Keran was even astonished to see his own landscape paintings and exclaimed “these paintings rival any of the Impressionist paintings”.

Nevertheless, when Li Yushuang first started experimenting with “coding method” in the early 70s, Impressionism was still deemed as “bourgeois taste” and banned. It was difficult to come across Impressionist images in the country, let alone the “principles” behind their paintings. Though both Li Yushuang and the Impressionists emphasized light and colors, Li did not care for the visual qualities that induced a sense of “the fleeting”. In an effort to “enrich the information” in his work, he would often work on the same painting day after day; in comparison with the sensitive and subtle “impressionistic” visual processing that the Impressionists emphasized, Li Yushuang’s paintings clearly accentuated the in-depth and humble understandings of “the universe, nature, and machine of life”. Li Yushuang worked as a professional painter since he returned to Beijing after 1985. Though his continuous landscape painting practice utilized the same “coding method”, there is unique intrigue within each individual work: some images seem solid and dense with a profound yet solemn beauty; some were completed in one stroke such as clouds tell a beauty of tranquil delight; some evoke a subtly delicate elegance; some reveal a genuine charm. During this period, the beauty of the natural world was highly integrated with Li’s subjective feelings and the self-discipline of painting language. As Li Yushuang reached 70 years of age in 2006, he had his own art studio and named it “Art Observation Room”. When his studio was founded, his art entered a new stage: on top of sketches, watercolor and oil paintings, he began more experiments using acrylics, ink, color powder, calligraphy brushes, xuan paper and more – the realm of “landscape painting” thus widened. Li Yushuang’s paintings are gradually changing as he started utilizing more media.In recent years, with the continuous expansion of sketching locations (Beijing Suburbs, Guilin, the United States, Japan, New Zealand… ), his vision and mind have also become more and more open. Although he is still using his unique method of observation, with the increase of the frame and the use of water-based painting materials, various unrestrained and natural visual textures have become significant forhis more ambitious “coding system”. As a constituent element, his “painting” has entered a “free state” that is unrestrained and unreachable, and the blending of the beauty of nature, painting language and human nature makes the picture a unique “brightness” which is not the outward exquisiteness and magnificence, but the “brightness” of “life” and “beauty” realized in the spiritual dialogue between the artist and “nature”.

In a sense, artists from the generation of Li Yushuang are regarded as purest “beauty” pursuer in China. Nevertheless, the talents of this generation of artists are mostly buried in endless political movements and later endless “new enlightenments”. Li Yushuang was fortunate to avoid this kind of vortex with his “amateur” status, and in his “landscape” paintings that he persisted for decades, he profoundly showed the simplicity, sunshine, passion of his generation, and “the genuine beauty of the times”.

Viewing Hills From a Lotus Pond in the Botanical Garden

Beside the River (The Road Yanfang Walked Through)