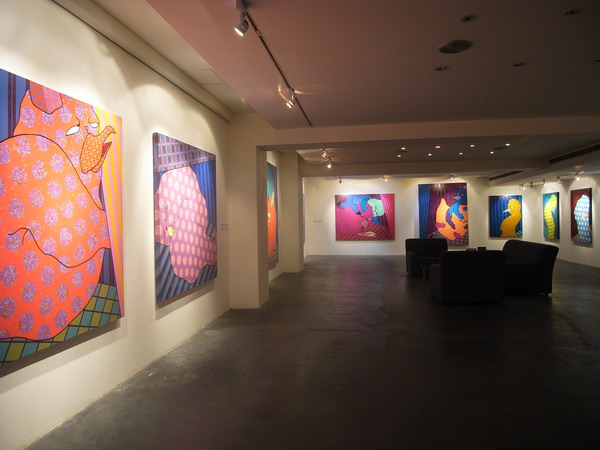 Liao Yuan, a young artist in his late twenties who was born in Taipei, graduated from the Tainan National University of Fine Arts, he was awarded the Grand Prize of “Taipei Arts Award” in 2003 and was also the first upcoming and promising Taiwanese young artist to be the cover star of the international art magazine ASIAN ART NEWS. “Fondle Without Tenderness” is the first big solo exhibition of Liao Yuan in 2008 at Asia Art Center. In this exhibition, his works filled with thick “alienation” between the characters, communication becomes incomprehensible, and once again, feebly tries to contact and make dialogue. Different from the Self-portraits in other forms in the past, the creative descriptions of the painting this time is no longer a simple and direct self-projection, but attempts to penetrate oneself to imitate around the body and people who are similar to its own, and to capture the trivial details, to piece together each short and faults situation, and to knead a pile of paradox characters as himself.
“Fondle” is supposed to be a gentle and sweet behavior, but here it filled with contradictions and doubts. Characters with their kneading, biting, thumping, hugging and other motions, it appears to be more chance to convey the desires that can not be said with words. It looks like a stage in each screen, with the edge of the curtain, people wonder in front and behind the scenes, appear in and out when the spotlight turns on, as if an accidently presented show and still rehearsing. The display of several series of works “Urban Lazybones”, “Banging the Wall” and “Patient with Beak Syndrome” are all characters in the stage of Liao Yuan’s painting, attempting to offer the opportunity to make noise, to show his character and characteristics. He searches the accidentally shown sense of and out of order in the gap between the time of boredom. It is people’s desire to be free; it’s the passing of healing. Trying to run away and abandon this weariness; it’s like an experiment, by odd twists, spins, pushes and pulls, covering, soundless breath, and slowly taking steps. People continuously play themselves while harboring low hopes, in search of the next surprise.

Urban Lazybones-Struggle Out of Bed Practice No.2

Patient with Beak Syndrome I

Banging The Wall No.2

Banging The Wall No.3

Banging The Wall No.1

Banging The Wall No.4