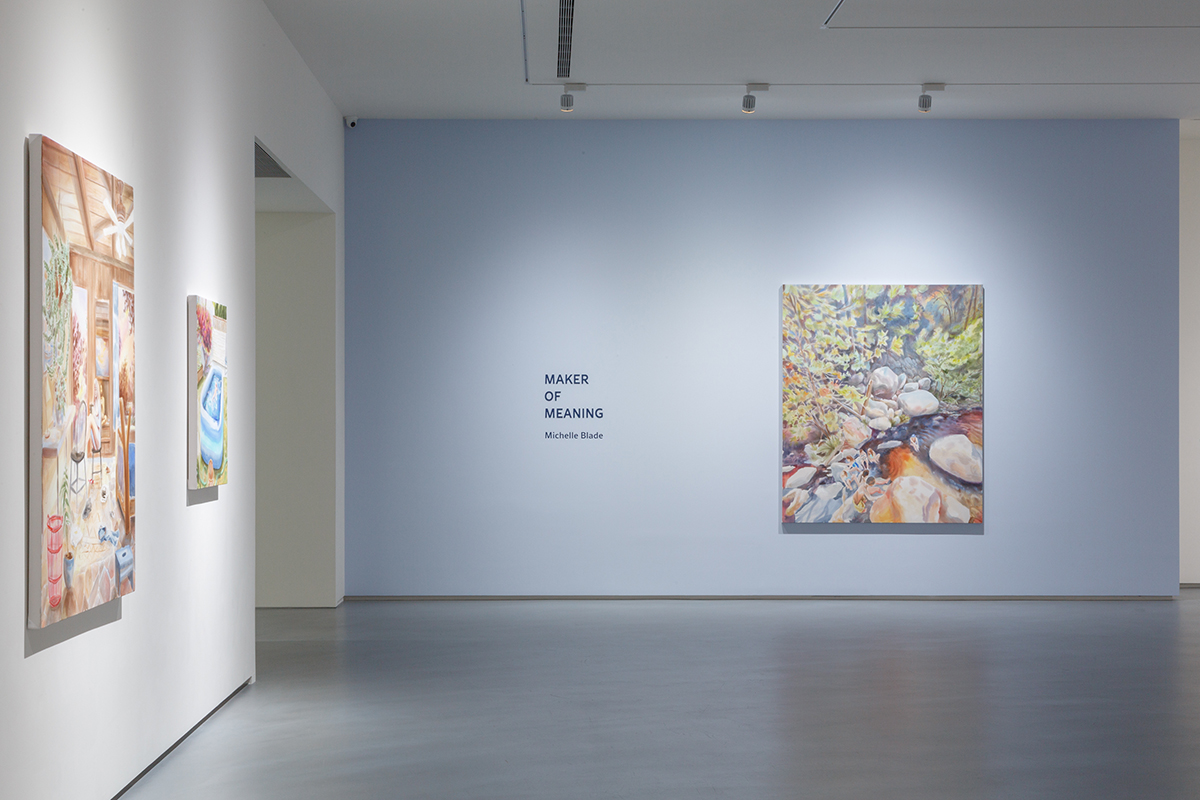 Asia Art Center is proud to announce a solo exhibition Maker of Meaning with American artist Michelle Blade. The concept on Maker of Meaning stems partially from French philosopher Jean-Paul Sartre (1905-1980) and his view that one must actively create one’s life through choice and decision. By grasping the notion that humans are more than our socially defined roles and by actively becoming meaning makers in life one can create sense and purpose through decision. Sartre distinguished between human ‘facticity’ – the set of facts that describe who and what we are at any point of time – and human ‘transcendence’ – our latent capacity or potential, which is never fully actualized at any point of time. We are creatures of potential and, as creative beings, that feels limitless. Michelle Blade feels this most in her roles as painter and mother, and at this point in her life the multiple roles are inextricably woven together, each purposefully informing the other.

On poplin, the light and gentle pictures display Blade’s remarkable style; her paintings are like puzzle pieces, assembling the memories of herself and her family living there. Lively colors record the vivid scenes of Los Angeles and are used to illustrate the themes of the works in the show. Michelle Blade depicts her family, community, and Joshua Tree National Park near Los Angeles, places her family lived and where she grew up. Blade extracted pieces of memories, scattered them, and designated each as paintings in the exhibition space. Just as memories flash and fade in our brains, they often appear without logic and reason, but they are indeed gentle and wonderful.

Within Blade’s artistic realm, she is actively mythologizing her subjects. By painting moments from her life time, she is choosing to create a world within a world where she celebrates a relentless quest of knowledge and understanding. This celebration of the void, the mystery of life evoke fleeting yet charged moments that lend themselves to poetic interpretation: a sunrise, a tidal wave crashing on a beach, anthropomorphic trees swaying in the wind, her two daughters exploring their lives.

In Anne Truitt’s Turn she beautifully articulates this questioning, saying:

“We dwell as strangers on the earth to become its wrack. We invent it for ourselves. We name it land and sea and sky. We divide its reaches arbitrarily into degrees of latitude and longitude, supplemented by a contrivance we call time. We forget, because we have to, in order to endure our plight, that these are rationales of our own logic. Indifferent to us, the earth rolls under our feet. I contemplate all this with curiosity and wonder, and then return to my daughter and grandson.”

Michelle Blade (b. 1981 Los Angeles, CA) makes paintings and drawings documenting time, closely examining the stillness, strength, persistence of the natural world. Blade contemplates and intersects these different times, as she creates a form for memory, infusing color and texture in her acrylic and ink on cotton poplin canvases.

Michelle Blade has been exhibited throughout the world, including Taipei, Los Angeles, Santa Fe, Stockholm, London, Tel Aviv, Netherlands, and Hong Kong. Blade’s work has been featured in “The New York Times Magazine”, “The Los Angeles Times”, “The Paris Review”, “Juxtapoz”, “The California Sunday Magazine”, and “Art Maze”. Michelle Blade holds a BA from Loyola Marymount, Los Angeles (2003) and an MFA from the California College of the Arts, San Francisco (2008).

The Light Within (Lula and Olive in Living Room)

The First Bloom in Some Years (Joshua Tree Bloom)

Pieces of the Sun

Between Dream and Reality (Joshua Tree at Night)

The Desire to Portray a Love (Self Portrait)

Her Strength, Her Softness (Olive in Joshua Tree)

Between Freedom and Fear (Olive Swimming in Backyard)