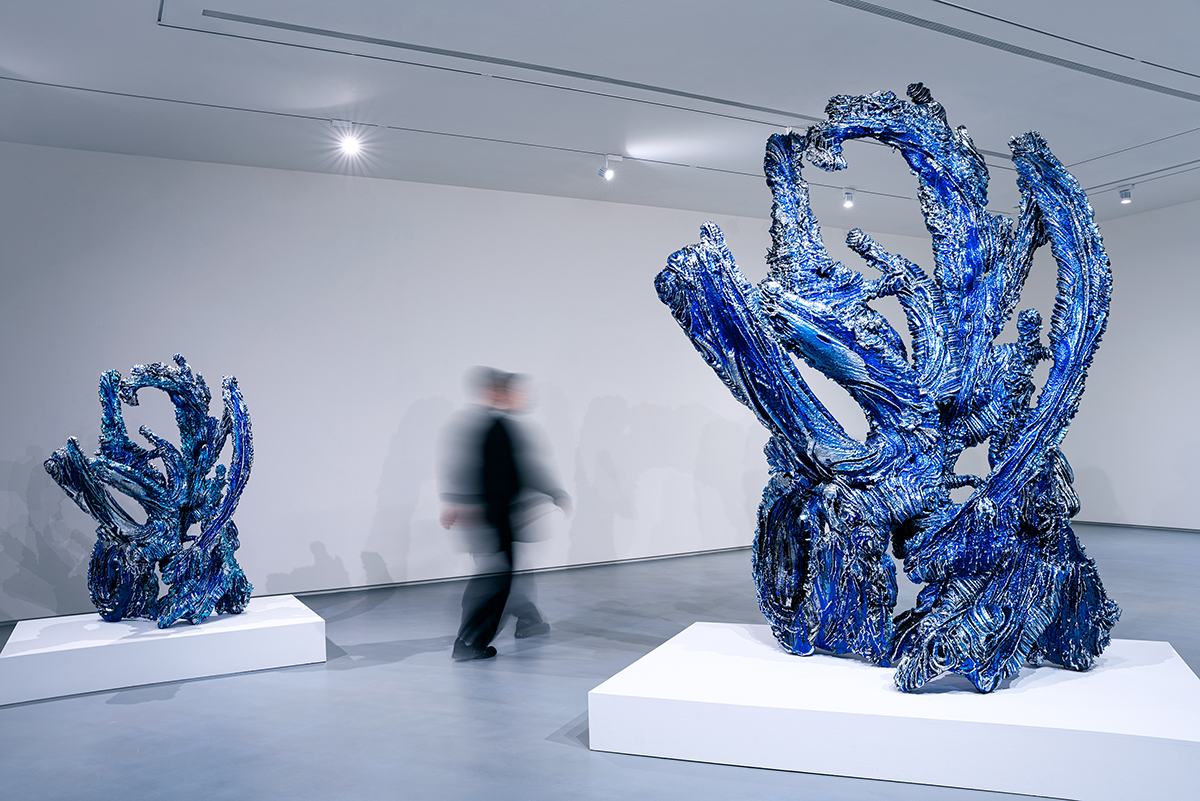 Splendid and free-flowing brushstrokes that twirl and turn like a sprightly dragon break out of the boundaries of canvases and soar beyond, leaving behind ethereal traces of wild and rampant energy. With the tip of his brush, the artist leaves an annotation that exudes an unpredictable aura, which instantly takes shape in places where the brush has graced, ever so brilliantly magnificent and mesmerizing. US-based Japanese artist Meguru YAMAGUCHI explores the idiom, “paint the dragon, dot the eyes”, which in East Asian culture symbolizes “the final stroke”, or “the finishing touch”. The artist uses his signature dynamic style of splattering paints to resonate with the allegorical meaning of the legend, with his observations and reflections on life and the universe cohesively presented in THE UNDERGROUND SPIRITUAL BLUE, the largest solo exhibition to date in his art career. On view in this exhibition is a comprehensive presentation of Yamaguchi’s creative trajectory, including the iconic series, OUT OF BOUNDS and MÖBIUS, and his groundbreaking 2022 series, The Underground Spiritual Blue. The exhibition also includes a 2.8-meter-tall sculpture, the artist’s largest piece to date. Demonstrating unconfined techniques and paradigm shifts, Yamaguchi’s art practice breaks existing frameworks and is in pursuit of a creative core with infinite possibilities.

As an artist who has been based overseas for 15 years, Yamaguchi’s everyday experiences and his creative motivation serve as constant reminders to the artist about how culture and art are instinctively perceived. He sees “dragon” as a cultural symbol that encompasses a broad range of ideas: Aesthetically, it is both figurative and abstract, and it is also culturally interpreted in both the West and the East. Traversing across the evil and sacred binary, it is a cultural carrier that represents both adversity and auspiciousness. Considering the idiom of “paint the dragon, dot the eyes”, or “the final stroke”, the artist realizes a sense of transcendence that resonates with his creative body of work; furthermore, he believes that expressions of art should surpass convention and not be confined within the canvas. Echoing the divine dragon’s ultimate fiercely fearless gesture, shackles are broken to soar high into a vast and boundless kingdom. The visual experience Yamaguchi presents is frank and profound. Take MÖBIUS NO.19 for example, the unbounded and liberated creative energy freely flows in between vibrant colors, with fierce creativity rampantly yet also steadfastly exerted from the artist’s brushstrokes, leaping uproariously away from convention. With courageous and creative spirits, Yamaguchi overturns and challenges existing norms in OUT OF BOUNDS series, sparking infinite imaginative visions about the present and the self in his audience through the intense sensorial impact created.

The paintings and sculptures on view reflect how the artist constructs his worldview. Yamaguchi believes that our world is a construct with constantly shifting and changing energies. For example, when we gaze up at the sky and see the clouds, we could see puffs of cloud, a dragon, or other things. We have a myriad of ways to interpret, to see, and to understand; the cloud, perhaps a constant material presence in this world, can also be perceived as a form of energy, or an endlessly morphing object. Visualized and presented by the artist are those eternally shifting energies like the highlight of the show PROMINENCE NO.2; they exist between us, on top of us, beneath us, and are inside of us; they are inside planet Earth, where countless creatures dwell and are also inside the burning cosmic sun.

The images created comprise of the artist’s vividly vibrant and freely moving abstract brushstrokes and are also the manifestation of his belief in art. To be innovative and unique is the principle that Yamaguchi stands by when it comes to art, which is a philosophy that’s profoundly influenced by his designer father. “Do what no one has done before.”[1] This is what he is in pursuit of in areas of technique, form, style, and concept, which can be traced back to the Gutai group. Abandoning conventional art tools, this post-war Japanese art group reevaluated human spirit and experimented with materiality. Yamaguchi’s art practice is considered a great contemporary conceptual shift in Japan’s history of art, and merging street culture, Japanese aesthetics, and stylistic studies of contemporary Western painting, he places emphasis on an aesthetic value captured instantaneously, creatively, and spontaneously from the culmination of art’s thriving energy and experiences in life. Yamaguchi believes that beauty is born out of spontaneity, and creativity can only be considered perfect when it stems from unpredictability.

The core of this solo exhibition focuses on Yamaguchi’s latest breakthrough with his original “Spiritual Blue” series. Having always had a preference for the blue color palette, Yamaguchi has in previous years been inspired by the color of the International Klein Blue (IKB) and has used the deep blue hue as the base of his work. Through extensive research and development, he sought to come up with a color that can best visually match with the vibrantly bright neon red that has become a significant part of his creative oeuvre. Through countless experiments and trials, he finally formulated a richly opaque blue with a sheen that he sees as an appropriate match to the neon red. He applies the colors to create his distinctive visual expressions leading to the brand new THE UNDERGROUND SPIRITUAL BLUE series and to attain a richly dynamic and energetic balance, which has culminated into a visual experience unlike any other.

Yamaguchi achieves a uniquely chaotic, vibrantly intense and visually robust abstraction, through a technique he’s invented and refers to as “Cut & Paste”. The method entails laying out paints on plastic sheets to dry, then cutting, peeling and pasting them onto other surfaces, as if collaging three-dimensional brushstrokes. Through this process of layering and arranging, the seemingly unrelated colors converge into highly intricate forms, reminiscent of a physiognomy or landscape, but appear as fresh, enmeshed, and rhythmic compositions. Yamaguchi’s earlier work mainly focused on subjects culled from social media imagery and was then dubbed a “digital Impressionist”; his recent work is pushing the possibilities of painting, gesture, and form by creating a new kind of sculptural paintings, in which the paint strokes seem to leap off any semblance of surface.

The spontaneity of the splattering paint, the freedom of gesture, and the performative exploration of painting seen in Yamaguchi’s work conjures to mind the work of Kazuo Shiraga from the Gutai movement, who painted with his feet in search of a new possibility of painting. If Shiraga’s work was about the body and the surface, Yamaguchi’s work returns to investigate the brushstroke and its departure from the surface, through the lens of street culture, Japanese aesthetic sensibilities and his intimate studies of modern and contemporary Western painting masters, like Cecily Brown, Gerhard Richter, Monet, among others.

Yamaguchi’s work is not only contained within the square of the canvas, but also finds its expression on different surfaces and media. From urban murals to skateboard sculptures, streetwear t-shirt collaborations to multi-story department store commissions, his practice consumes the notion of genre, swiftly traversing between subculture, popular culture, and high culture, with equal amount of gusto and eloquence.

[1] “Do what no one has done before.” This quote was from a declaration made by Yoshihara Jiro, a leader of the Gutai Art Association in post-war Japan. Shiraga, Kazuo. The Water Margin Hero Series, 2018, pp 12-13. 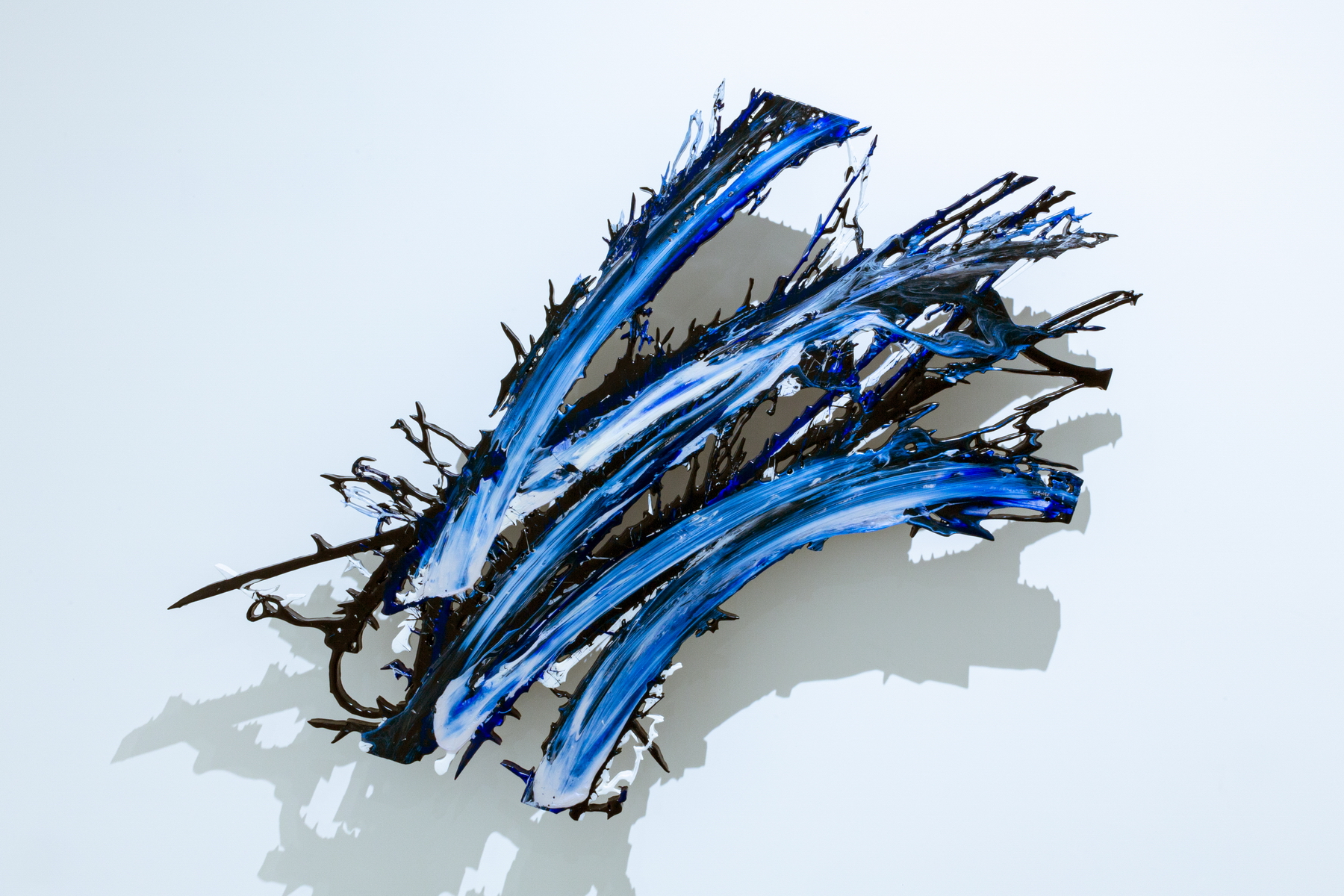 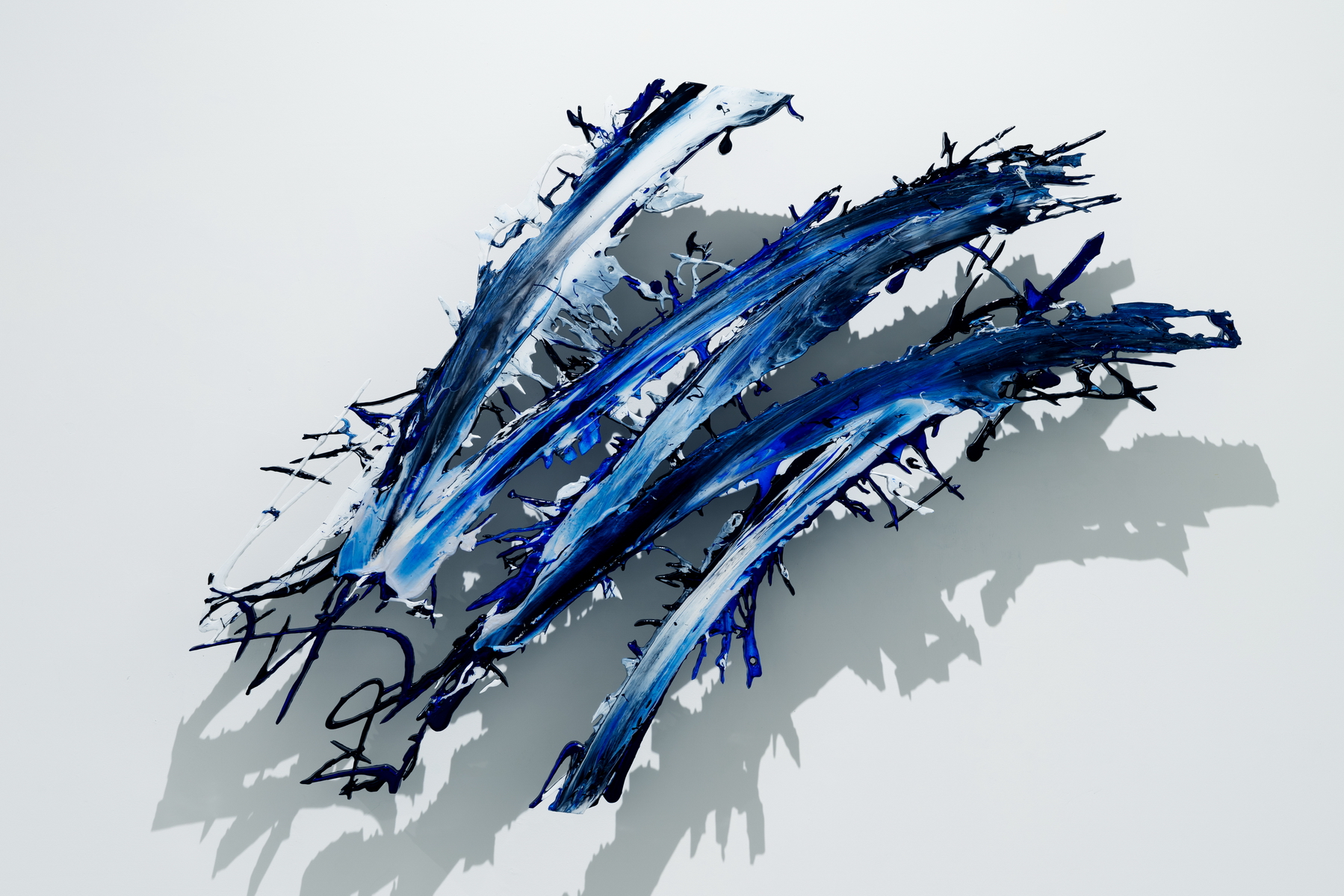 OUT OF BOUNDS EXPERIMENT NO. 3 OUT OF BOUNDS EXPERIMENT NO. 4 OUT OF BOUNDS EXPERIMENT NO. 5 THE UNDERGROUND SPIRITUAL BLUE NO. 1 THE UNDERGROUND SPIRITUAL BLUE NO. 2 THE UNDERGROUND SPIRITUAL BLUE NO. 3

THE UNDERGROUND SPIRITUAL BLUE NO. 4