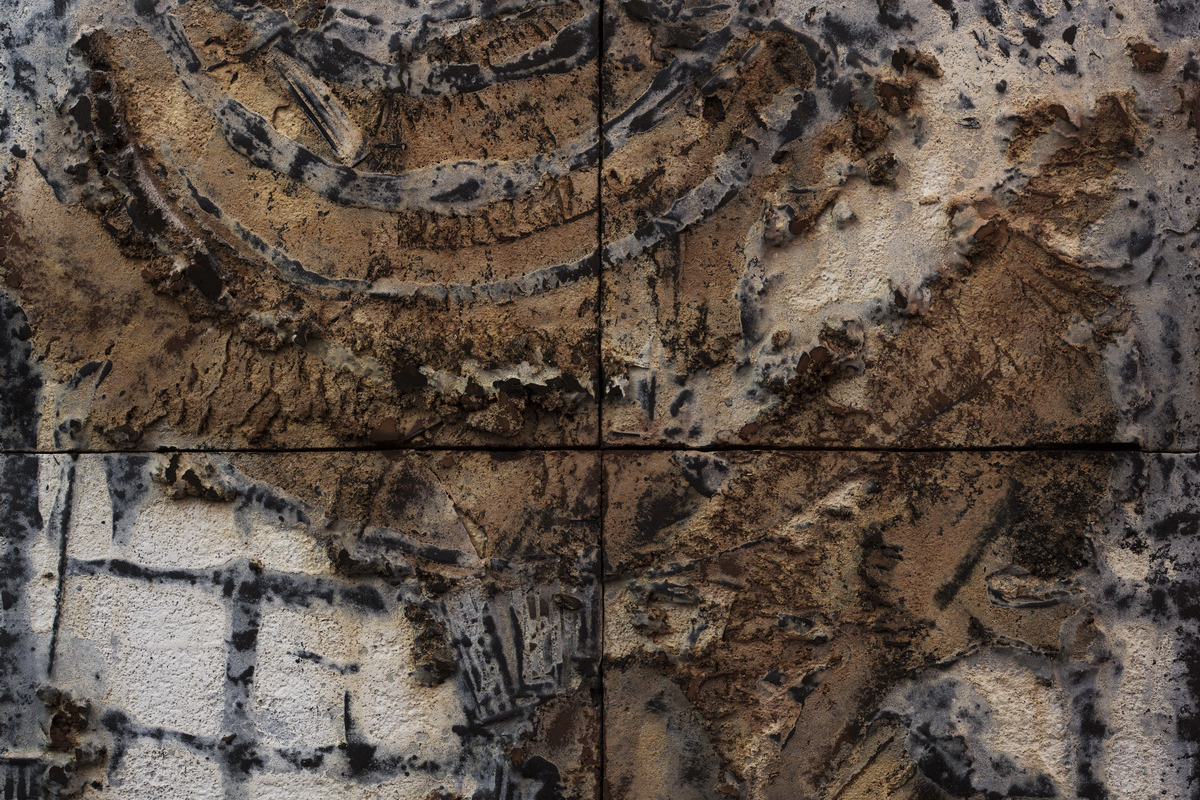 When enjoying the works of Qu Qianmei, one’s initial impression is with the majestic momentum they evoke. Her use of heavy kaolin, several hundred kilos of square steel columns, accompanied by lacquer, hemp, Pu’er tea and other natural materials, all of which serve to constitute the main body of her picture. Qu Qianmei’s paintings create a unique third space between painting and sculpture, with giant screens and complex texture, and fullness of artistic language, giving a stunning visual impact and providing the work with a theme and content expressed with a distinctive touch. Beginning April 26, 2014, the Asia Art Center will host her latest creations in an exhibition entitled “Micro as if invisible- Qu Qianmei’s newest creations”, presenting her repertoire for the most recent years, in a symphonic orchestration of mixed media presenting their unique voices in a robustly rich artistic harmony.

Qu Qianmei enjoyed many years of formal artistic training as a professional painter, but paints with her original artistic motivation and dream, revealing her original experience in the 1980s as she began her artistic career living in the cultural capitol of the world, Paris, France. Through the course of more than twenty years in France, she has visited numerous European countries, especially Greece, and all the locations which artists have long held to be part of their customary pilgrimage, which served to open her perspectives with a deep sense of Western cultural creative inspiration. The works of Antoni Tàpies i Puig introduced Qu Qianmei to the world of media, in a world borrowed from the infinite beauty of the abstract and texture contrast to the arrival of creative freedom. In the backdrop of Western culture, Qu Qianmei became more aware of herself and her own native cultural traditions. After returning to China, she pursued advanced study at the Central Academy of the Arts in art media, beginning her exploration with abstract artistic creation, looking for her own unique voice and expressive method. On one trip to Tibet, Qu Qianmei was suddenly artistically inspired, opening her soul to the creative experience. The majestic towering mountains, clear lakes, splendid temples, and the traditional hada scarf floating in the heart, all helped to remove the urban hustle and bustle so the artist could find her renewed artistic home. With regard to her trip to Tibet, Qu Qianmei noted, “I always was fascinated with Tibetan culture and Tibetan customs, so when I visited Tibet, it was a joy to be free from the urban clamor and no longer see the impetuous hustle and bustle of city dwellers. What moved me the most was the sincerity of the Buddhist adherents, as they prostrated themselves, and reading their Scriptures with sense of contentment… all of which moved me deeply. After visiting Tibet, my soul found it was again at home. But my greatest influence from the Tibet trip would be on my spiritual state, as I no longer felt the vicissitudes of the past, beginning to feel quite free and naturally calm. My works then also began a natural process of transformation.” It surely seemed destiny that that trip to Tibet gave her such a depth of inspiration.

In Qu Qianmei’s works we can see her emotions cast in the media, with the red clay serving as a reminder of the soil atop the high plains, as she leads us on a journey to a mystical world, and this Shangri-La is replete with questions and reflections on life. The cliff-like texture cracked wall shows the intensity of Qu Qianmei’s life, with gorgeous color presenting a heavy emotional and delicate interpretation of Qu Qianmei. Here, as the material for the medium itself is prominent, and has become a “narrative” of the body, which is as Greenberg argued, “Art in the media,” evincing a practical expression of this theory. Of course, sometimes material itself has a charming performance and expressiveness, but Qu Qingmei is not stuck in the material game, but relies on the material and form to create a composite Oriental philosophizing mood. Mixed materials, the feminine, and the traditional southern Chinese design elements reflect an artistic language whose words seem difficult for us to accurately locate in the work of Qu Qianmei. From the solitary sense of the mass of the painting to speculate on the artist’s gender, one could easily mistakenly think the artist was a male, so it is all the more surprising to learn the work is produced by a traditional southern woman’s hands. In fact, it is precisely this contrast, which lets us see the explosive and infinite inherent energy of the female artist, which is so missing in today’s art world, with its all too similar, and all too much formality , which has given us the viewer a sense of visual fatigue, while Qu Qianmei’s works are like a dose of decoction, which when first begun may be bitter to the taste, but in the end is aromatically pleasing like licorice.

Although the use of mixed art materials is a Western creative method, but we still perceive the “Tao” of the orient in the works of Qu Qianmei. Whether it is the accumulation of kaolin, or deadwood installation, or pouring paint artistically, they can all help with exploring in an ineffable way, as these substances reflect the material conception of art and artistic sublimation in discourse, so this time, it is not by means of the media that the artist seeks to shape the image, but by means of certain “properties” to express a metaphysical reach of mind and matter connected together. If we say that consciousness is overcast, and the substance is positive, then the space is biophotonic Qi energy. “Everything has intermixed blends of yin and yang, and the ethereal biophotonic Qi in unity?, with physical media serving to evoke the enthusiasm of the audience to “read”, following the on-screen material symbols, such as the framework for a building, rolling a tire’s tracks, broken walls and residual wall debris, dry and cracked bark of the trunk, opening a footpath leading to the artist’s emotions, and thereby completing the mission of “dialogue” , this is the vitality of the material media. From learning to explore her personal style from amongst the path of her gurus, from the abstract to the heavy freehand of her new work following her trip to Tibet, Qu Qianmei emerged with her first leap forward in her own unique style of artistic expression. Wassily Kandinsky thought painting had two kinds, one material, and one spiritual. Material painting relies on stimulation of the visual nerves to move the viewer, which is an external process; while spiritual painting relies on expressing the harmonic resonance of the soul in all its emotions. Without a doubt Qu Qianmei’s creations reflect the latter approach. Just as art academic Fangzhou Jia wrote: “in recent works, Qu Qianmei’s works have reached a mature expression: they no longer reflect their prior singular and august presence. She has developed inner strength, quietitude and introversion, and has become more profound in heart, nurturing, more like a tranquil literati expressing the inner through meditative ink painting. So Qu Qianmei has evolved closer to her true inwardness, revealing her authentic Oriental roots in her aesthetic sense and the pace of her evolving vision.”

Standing before Qu Qianmei’s works, we can sense that it is not merely a structure of mixed media, but rather a supernatural force and expression, which reflects a critique of history and culture. The original sense of the work has receded revealing a different sense altogether, which the material becoming energetic, and the energy serving to instill a more profound layer of material, with all the clear but micro contents expressing abstract principles of the world beyond the confines of the material, which is exactly what the visual texture the works of Qu Qianmei desire to instill in us.

A-09 Writing in the Cloud

A-27 Boating in the Cloud

A-07 Sailing in the Cloud

A-02 The Bleak Night

A-35 Memories of the South

A-07 Thousand Heaps of Snow

A-06 Looking toward the Sky

A-51 Shining in Harmony

A-09 Crescent Moon as Cold Eyebrow