A+ Contemporary is pleased to announce the opening of Chen Yufan and Chen Yujun’s solo exhibition “Mulan River-Voyage” on April 28th at Asia Art Center Taipei II. This is the first time the brother artist duo bring their significant project “Mulan River” to Taiwan since their collaboration in 2008. This exhibition will continue until June 3rd, 2018.

Chen Yufan and Chen Yujun came from Putian, Fujian, where the drifting Mulan river runs across artists’ hometown, Putian，and flows into Taiwan Strait. This is a geographical waterway that connects Taiwan and Fujian, yet at the same time, it’s also a migrating route, where the origin of Min clan are scattered and separated from here to Nanyang (South Ocean) area’s various parts. Since 2008, “Mulan River” project has been exhibited in various countries and regions from east to west across the borders. In 2017, artists bring “Mulan River- Cuò” to Petach Tikva Museum Art Museum in Israel, where the fragments of household elements slowly unfold artists’ nostalgic reminiscences of their hometown in a distant foreign land. This time, “Mulan River” project voyages across the running river, and finally lands on the other side of Putian, Taiwan. By bringing “Mulan River” project to Taiwan, for the artists, therefore is a search for the origin, a return to fragmented migrating history, and more importantly, a revisit to the shattered distant homeland memory. And for us who reside on the other side of the seashore, “Mulan River-Voyage” therefore brings a temporary moment of tranquility and ease into our complex and mixed ethnical identities. Yet the shared identity, interconnected Mintai ancestral kinship and culture reciprocally resonate and touch a part on Taiwan’s diverse and varied ethnics.

Continuing the logic trajectory of “Mulan River” project, artists thread elements of household parts, rivers, woods, and canoes into their artistic creation. The featured installation piece “Mulan River-Voyage”, is made with various specimens of woods, such as rosewood, old elm, logan branches. They are collected and selected by artists from various regions, and then carefully handcrafted, carved, and assembled into a wooden architectonic interior. The primitive and natural senses brought by the woods, therefore reinforce with theatrical staging composition of the installation work, revealing the traces of Min regional culture. Yet the subtle nostalgia and melancholia that are embedded inside also become the core of artists’ creation. Liberating from time and space’s confines, this work resonates and echoes with the exhibition title “Mulan River-Voyage”, carrying artists’ nostalgic memories crossing the drifting river and voyaging to the other side of shore. Like the stage assembling making process, viewers, together with the artists, seem to be in the process of reassembling our once scattered memories, each fragment embodies a narrative story, and belongs to a certain time and space, in this journey, they are in turn slowly and softly being reconnected and rejoined.

Resonating with the installation piece are the painting series “Been Continued Scene”, as well as the video series “Mulan Drift”. These works continue the use of wooden materials, the portrayals of river, boats, shores and households. In the “Been Continued Scene” series, artists weave their melancholic search with the continued sceneries, forming them into a wandering voyaging pathway, crossing through pictorial land, we seem to become a part of the figures inside the paintings, looking towards the other side of ocean- another homeland of a distant past. Contrarily, in “Mulan Drift” series, the motifs of waves, local religious deities, theatres and the vintage photography of portraits are interweaved with the moving images, though interconnected, they are blurred and fragmented, as if the hazy traces of the memories, ceaselessly searching for a nostalgic moment from another time and space. “Mulan River-Voyage” (the exhibition) therefore bounds the various medium, transforming the exhibition space into a lyrical folklore landscape where waves, river, woods, houses, seashores, boats and the local rituals intertwine and echo with one another, through which the search for memories, the traces of nostalgia, and a quest for return transcend into an endless voyage, carrying artists and us to keep on looking for a lost distant homeland in time and space.

Chen Yujun | The Temporary Family of the Everyday Life 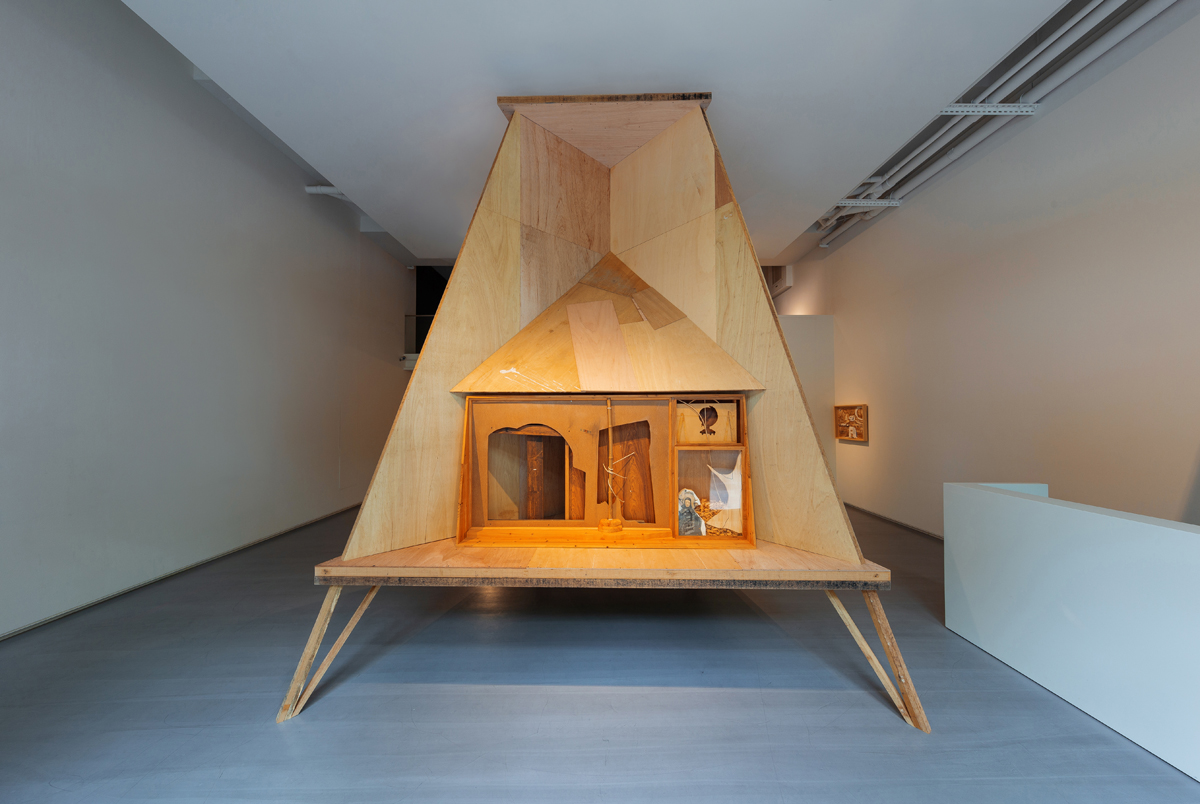 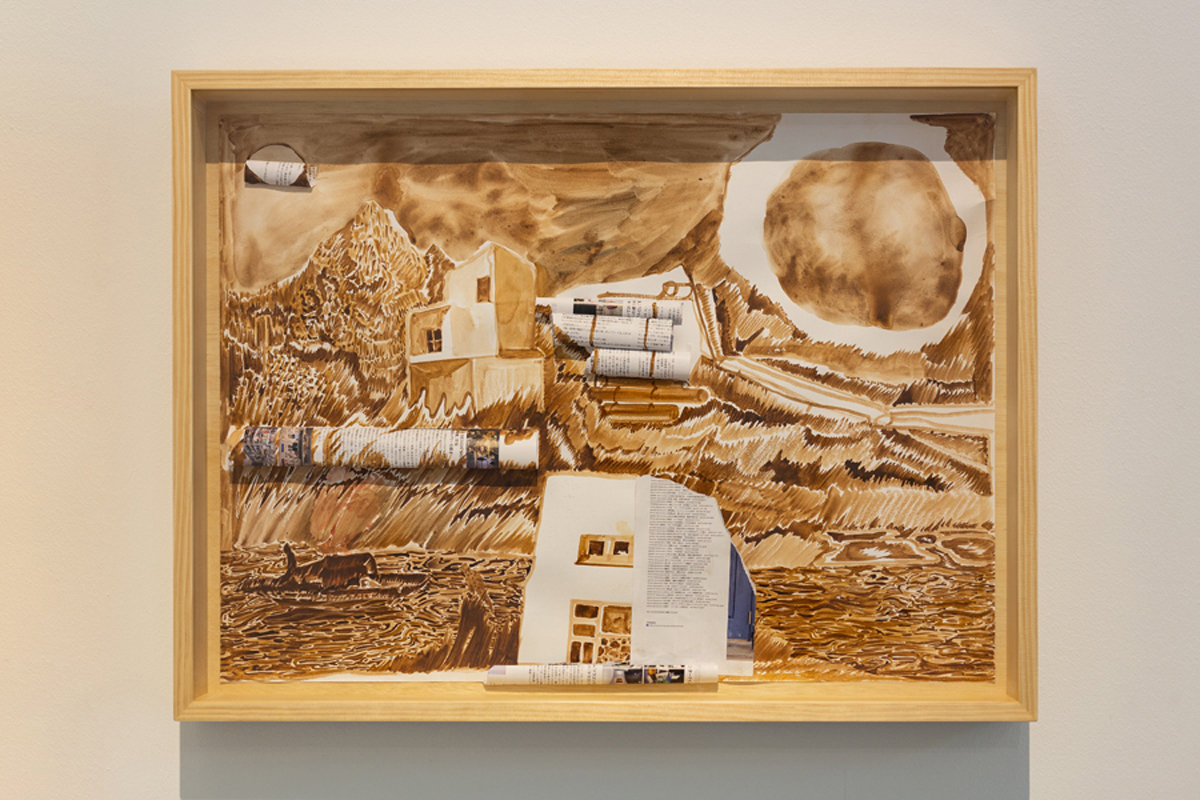 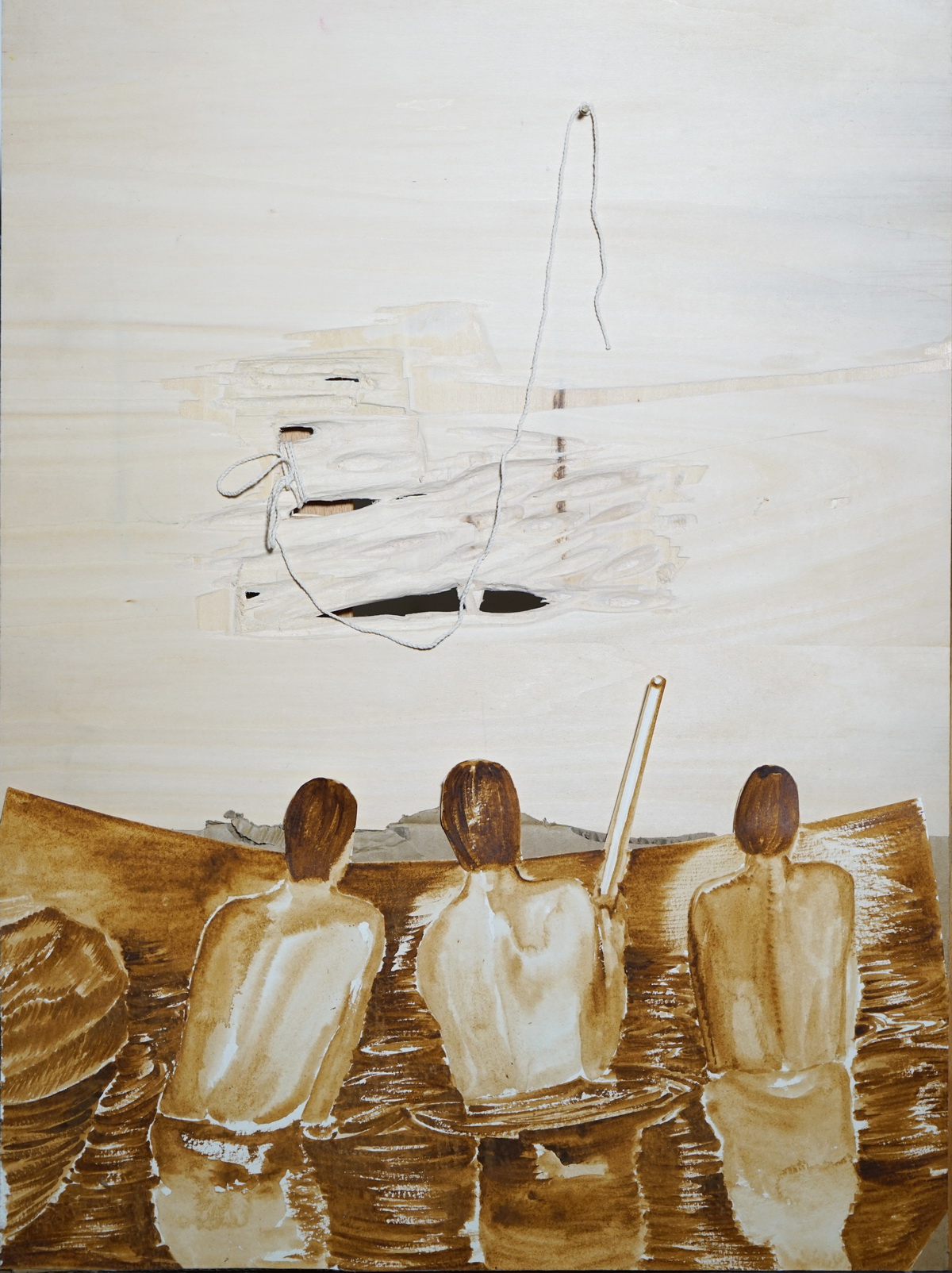 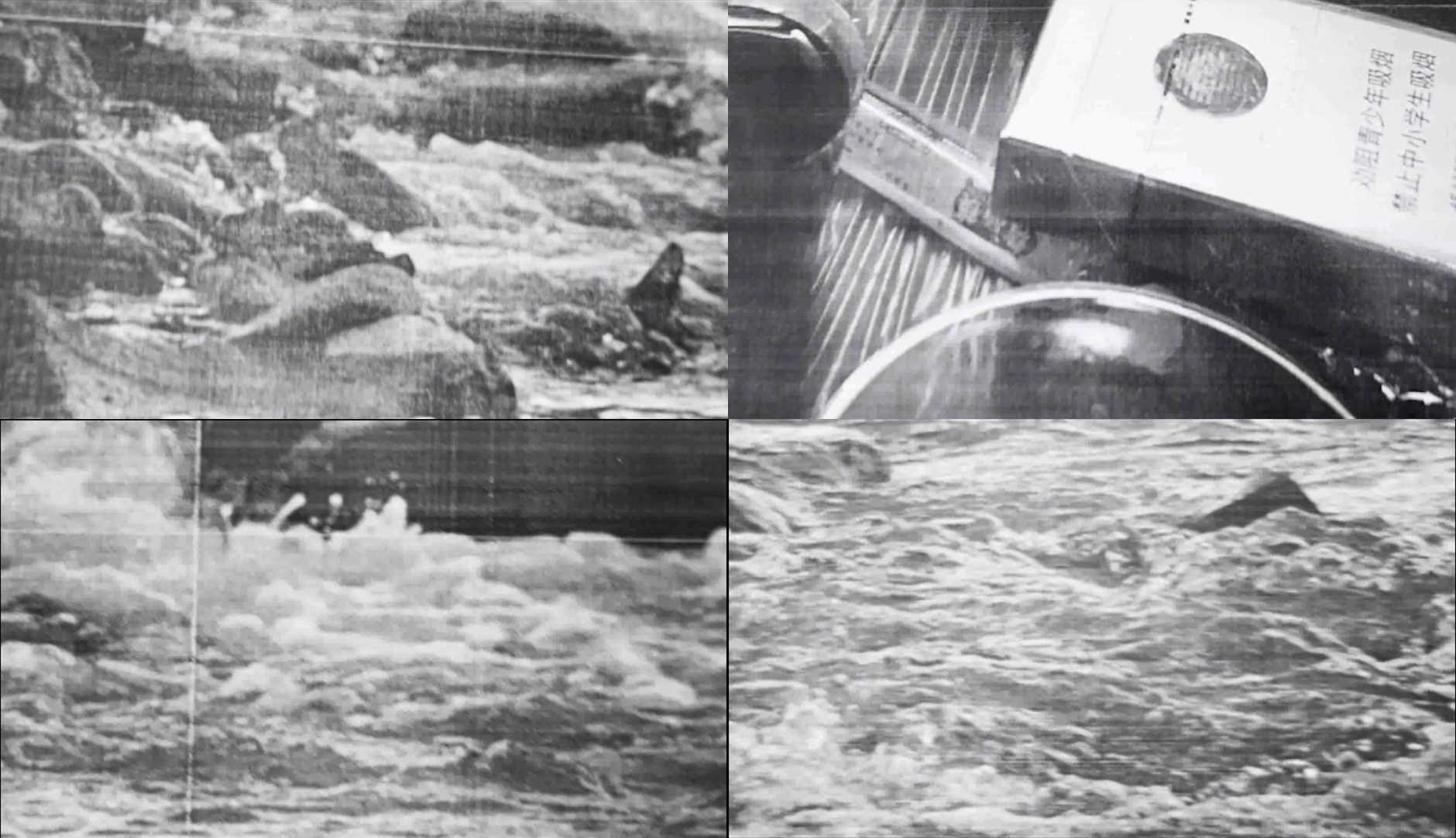 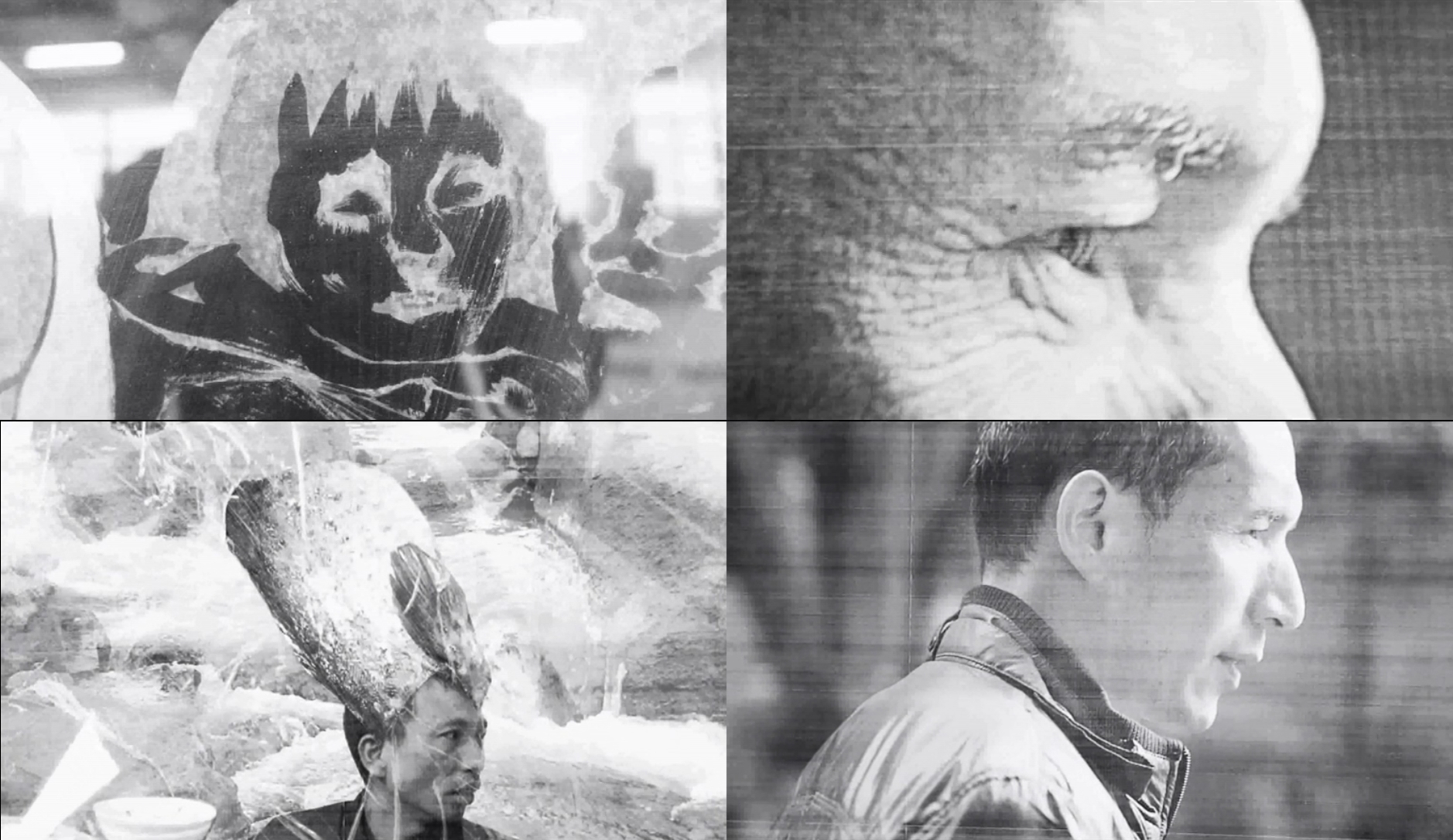