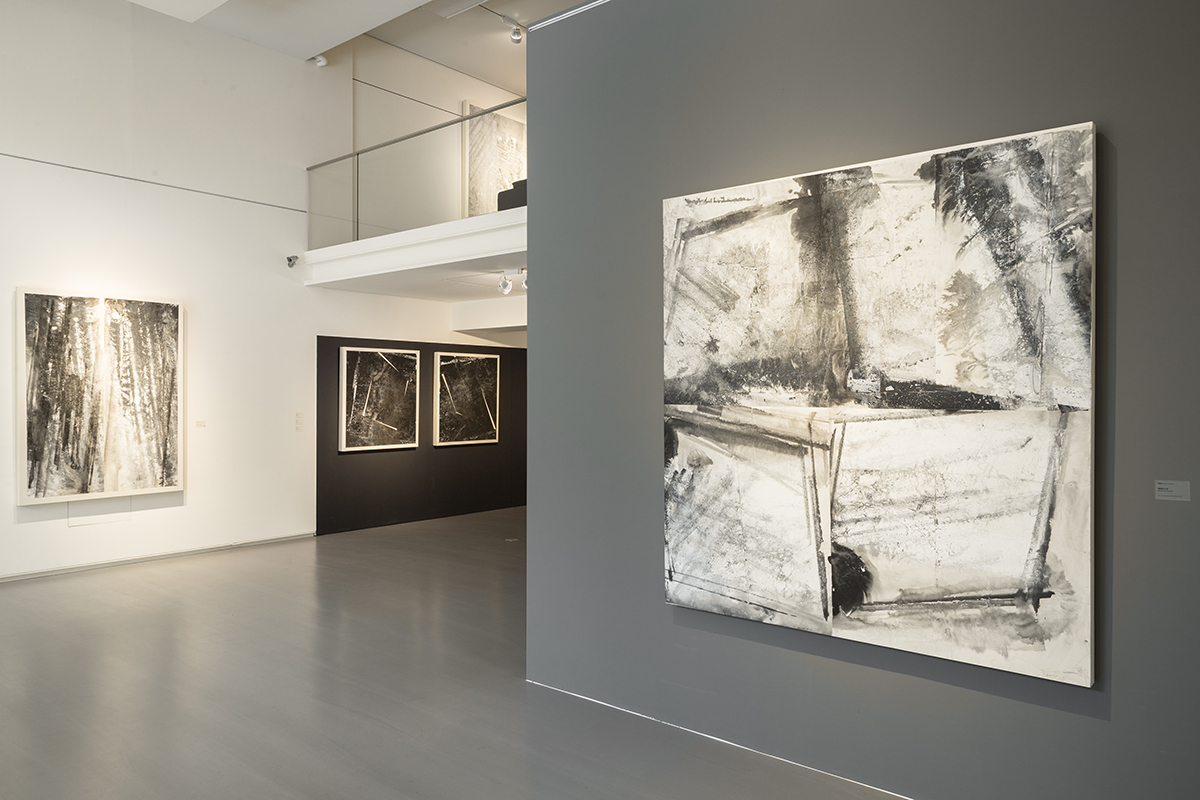 The Matter Becomes Form – Zheng Chongbin and his ink media

In 2012, as celebration for the 100 anniversary of Rice University, James Turrell was commissioned to create a skyspace titled Twilight Epiphany that used LED light performance to complement the natural light present at sunrise and sunset, transforming the skyspace into a locale for contemplation and reflective interaction with the rest of the campus and the natural world.

Turrell once said: “This results in an art that is not about my seeing, it’s about your direct perception of the work… Likewise, my interest in the perception of light is in giving it thingness.” Such awareness to context echoes the “moon in the water, object in the mirror” of Chinese classic Canglang Poetry Talks by Yu Yan. The Eastern aesthetic experience is further expanded through renowned Chinese contemporary artist Zheng Chongbin, who revolutionizes the expressive language and capability of Chinese traditional media – ink.

Zheng Chongbin was born in Shanghai and attended Zhejiang Academy of Fine Arts to study Chinese Paintings, where he taught for four years after graduating in 1984. In 1989 he was awarded the First International Fellowship to further his training at the San Francisco Art Institute, acquiring his MFA in 1991. He currently resides in San Francisco with a studio in Shanghai. As one of the most notable artists in this emerging Chinese ink painting scene, Zheng was awarded Artist Excellence Exhibition Series Grant by the San Francisco Chinese Cultural Foundation in 2011, and further included into Christie’s exhibition on Chinese contemporary Ink that featured pioneering artists first gaining prominence from abroad such as Liu Kuo-sung, Gu Wenda, Xu Bing, Yang Jiechang, Qing Feng, and Qiu Zhijie. He is awarded the permanent site-specific installation art project from Moshe Safdie Associates, and commissioned by The Sand’s Corporation at Marina Bay Sands Integrated Resort in Singapore. His works are in the collection of the British Museum, San Francisco Asian Art Museum, Marina Bay Sands, Singapore, Daimler Art Collection, Germany, DSL Collection, France.

Traditionally trained in Chinese painting, Zheng began to paint abstract works in the 1980s. His works are visually powerful and are manifestations of the physical strength of the artist in action. Influenced by the school of abstract expressionist painting, Zheng uses bold, gestural strokes to create abstract imagery that explores the interplay between black and white. His works are seemingly monochromatic but upon close inspection they embody a myriad of textures as a result of the interaction between ink, brush and paper, creating a sense of spatial dimension through the layering ink and acrylic. “My intention,” says Zheng, “is to investigate the logic of the ink medium and its perceptual characteristics, the alternation between transcendence and the materiality of the work.” He was exposed to Californian sunshine and also influenced by the Californian Light and Space movement artists including James Turrell (b.1943), Robert Irwin (b.1928) and Doug Wheeler (b.1939), and influenced by their focus on perceptual phenomena including light, volume and scale and use of transparent, translucent or reflective material to heighten the viewer’s sensory and experience of light.

Zheng Chongbin’s unique hybrid visual language is a result of his personal experiences and diaspora position of negotiating “in-between” the physicality of light he is exposed to in California and understanding of his own ink medium conditioned by its cultural duality situated between two continents.

Silhouette of the line

The 90 Degrees of Resonance