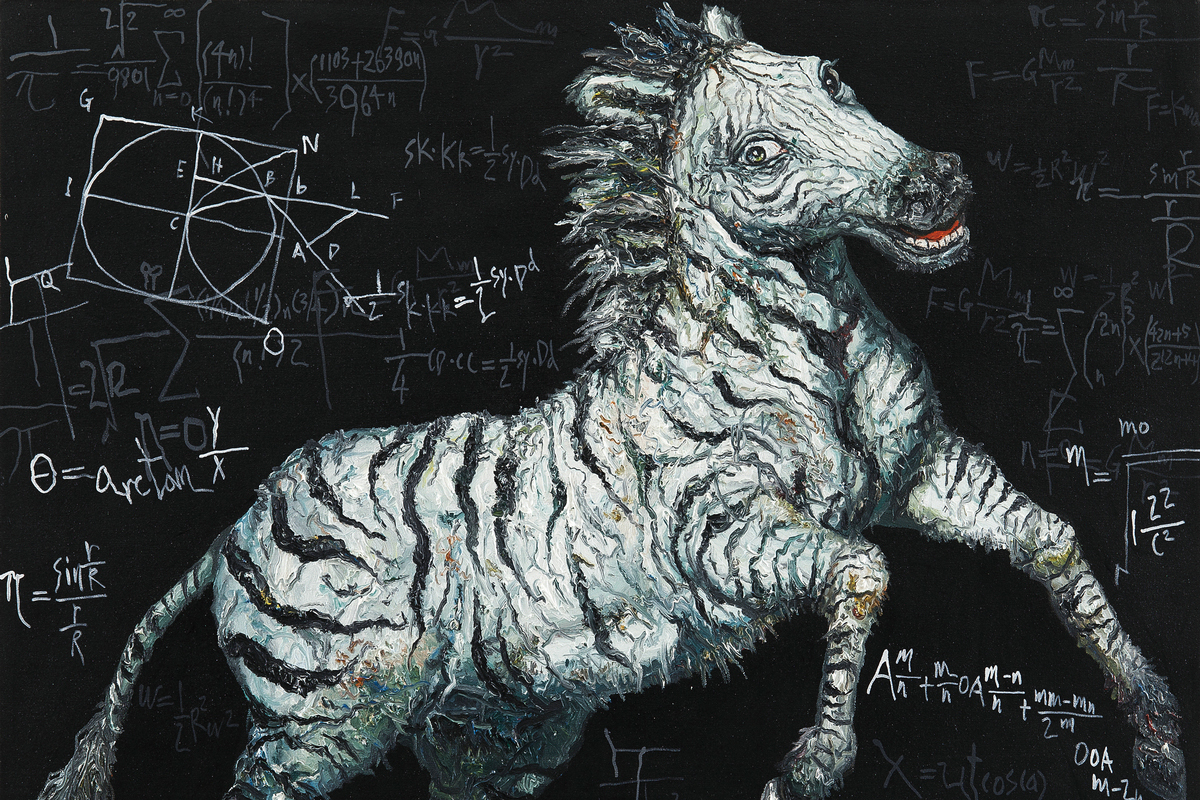 With daringly bold strokes, and rich colors, the artist Hua Qing creates a non-human world, where ration or emotion, the animal instinct and social animal emerge to tremendous strife, where the boundary of man and animal is drawn closer, evincing Hua Qing’s affection for western cultural influences along with a transformation of the traditional Chinese semiotic and zoosemy to envision animals as the wild animals of nature, completely transforming the traditional twelve zodiac signs as metaphors of reincarnation and destiny, while also empowering the animals with a pair of human eyes with which to stare at us, over and over again pleading with us: I am no different than you, you are me, and, I, am one of your faces.

The artist Hua Qing, a native of Anhui Province, was born in 1962, and graduated from the Anhui Arts Institute and the Central Academy of Arts and Design, followed by graduation from the Anhui College of Arts in 1981. He was the first Artist-In-Residence selected for the Old Summer Palace (Yuanmingyuan), to engage in vanguard art activities, and then journeyed to Vienna, Yugoslavia, and Slovenia, while also managing to engage in artistic creation for six years just across the straits from mainland China in Taiwan. Then he returned home to China. His expansive life experiences and artistic creation have imbued him with a deep appreciation for western culture. When Hua Qing returned to China from abroad, he felt the immense weight of the tremendous transformations affecting Chinese society, politics and the economy, and the confusion these have wrought on the culture, as Chinese contemporary art commercializes, moving closer to abject materialism, while western modern art has over a long time emerged from an emphasis on rationalism above all to a nuanced subtle focus on exploring matters outside the rational and expansive emotive space. Hua Qing desires to express through his art a transcendence overcoming the superficial materialism while also revealing deep spiritual significance. To overcome the contradictions he feels from the western and Asian artistic aesthetic, he created an Anthropoid series which explores the zoosemiotic distance at the core of human history to revivify the contemporary art field, in the hope of restoring the creative energies that lie at the deepest recesses of his soul, and also to elucidate the significance and truth of the universe through rational scientific semiotic signs.

In recent years, Hua Qing surpassed himself with additional elements in the Anthropoid series, as well as adding new integrative painting techniques to his creative bevy, holistically combining a fusion of graffiti, realism, and impressionist styles. In this 2013 exhibition at the Asia Art Center Taipei II Gallery, “The Twelve Faces of Humankind–2013 Hua Qing Solo Exhibition”: among which the painting series feature black backgrounds, along with a proliferation of graffiti style mathematical notations, physics equations or renowned philosophical sayings, in white or grey amidst the background, while the zodiac animals are drawn using expressionist techniques, so that the keen observer can immediately recognize which zodiac animal is represented, as the ethereal dragon is no longer a dragon at all but a dinosaur that actually once roamed the earth, and the chicken is no longer a rooster rising to sing forth reveille in the morning, but has instead become a wild turkey, with a huge body volume in red and red wrinkled neck skin evoking the truly wild nature along with their original forcefulness in the wild; then there are the woodprint series printed on spun silk, with deep, flying brushstrokes that elicit all the wild nature of the twelve zodiac animals.