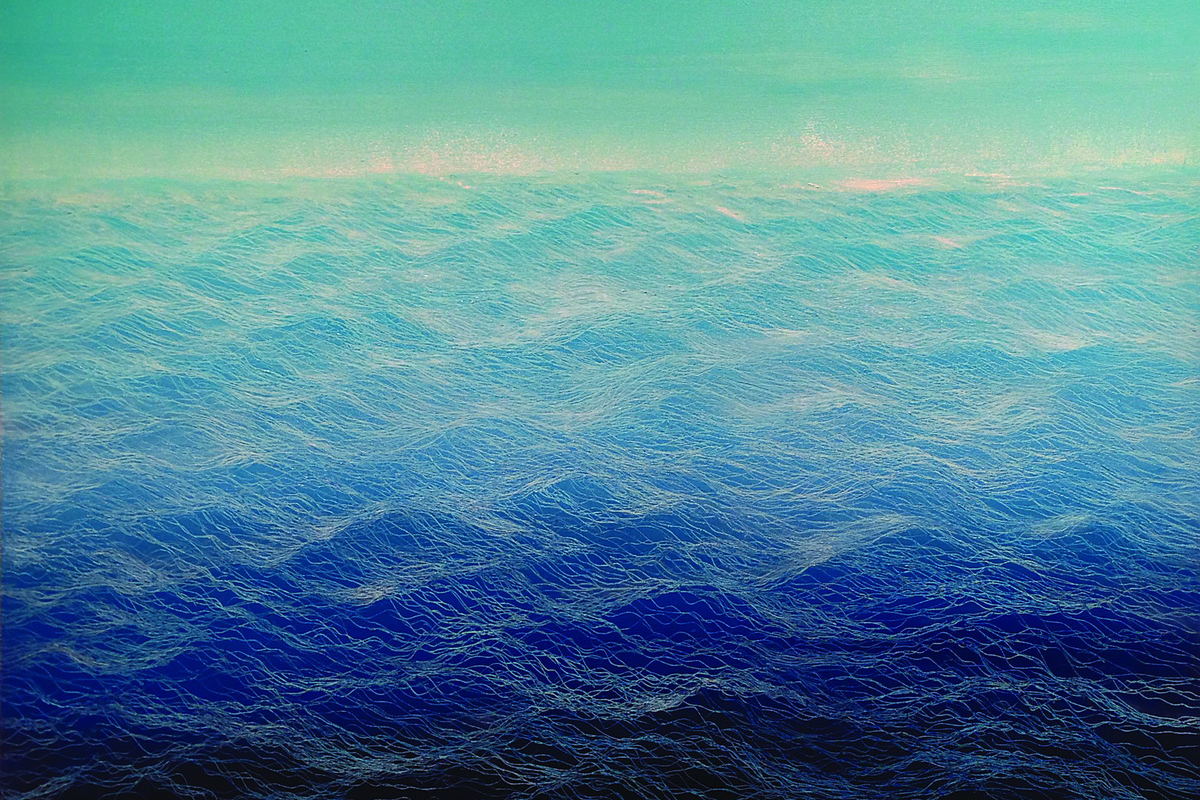 Leigh Li-Yun Wen was born in Taipei, Taiwan, in 1959, and received her M.F.A. from the State University of New York at Albany in 1994. Her works were selected to be part of the Art in Embassies Program of the United States Department of State and have been on display in the U.S. Embassies around the world, among which three works are permanent collection of the state. (of the States?) This exhibition will showcase Leigh Li-Yun Wen recent new oil paintings, a collection of creative works inspired by four fundamental elements: water, earth, air, and fire. The artist captures various natural hues and sceneries, leading viewers to plunging into an unfathomable universe and experience the fickleness and freedom within.

Being an artist, Leigh Li-Yun Wen knows too well that the nature of art is chaotic, yet it is still a reflection of our vigorous life—wild and powerful. It is this understanding that helps Leigh Li-Yun Wen to remain at east amidst the chaos by engaging herself in art. The artist’s work must go through priming, covering the canvas with layers of dark pigment, and then carefully scraping the moistened pigment with a stylus to create rhythm and depth. The first impression of her works is the countless scratch lines on canvas done by repetitive action, and yet no two lines are alike. Such massive scraping movement symbolizes a kind of surging vitality of life, internal commotion, and positive connotation. Leigh Li-Yun Wen’s recent thematic creations are established around water, earth, air, and fire. In this exhibition it will present a various faces of these natural elements, such as expression of ocean from dawn to dusk, butterflies darting into a flame, and stars traversing the vast universe. The artist seems aware of the mood of fire and water, and feels deeply the immensity of space. As stated in The Thousand-Character Writing: “The sky was black and the earth was yellow, the universe was vast and a dark whole.” In Leigh Li-Yun Wen’s paintings we perceive an order within disorder, as if witnessing the calmness and disarray of Genesis. The sense of “grandeur” in Chinese aesthetics coincides with Immanuel Kant’s aesthetic philosophy of a “sublime” state. Leigh Li-Yun Wen’s artwork undoubtedly provides an interpretation for contemporary sublime aesthetics.

Having studied printmaking and pottery, and is familiarized with engraving and carving techniques, Leigh Li-Yun Wen tries to incorporate such unique characters into her oil paintings. She first primes the canvas, then covers the canvas surface with dark pigment, then scrapes the pigment before it is dried, so the two layers of color can be revealed at the same time. The lines flow across the canvas in rhythms and frequencies that create depths and swells on the painted surface, highlighting the thickness and texture of the painting—an arduous process for the artist indeed. For the artist, scratching is a pleasure; for artistic expression, it is the freedom of improvisation. From March 2nd, 2013 to March 31st, 2013, “The Unfathomable Universe: Leigh Li-Yun Wen Solo Exhibition” will be held at Asia Art Center—Taipei II branch gallery at Dazhi (No.93, Lequn 2nd Rd., Taipei 10462, Taiwan), come and appreciate the life inside the heart of the universe.

Back to Pacific I

Back to Pacific II

Back to Pacific III