Asia Art Center is honored to announce that “Tranquility: Artworks by Chen Yan & Guo Jianlian” will be held from November 6, 2021 to January 30, 2022. In this exhibition, there are almost 40 artworks of artist Chen Yan’s silver gelatin engraving, lightbox installation and ink paintings on paper, and Guo Jianlian’s oil paintings on canvas, presenting their exploration and practice of painting experiments.

“Tranquility” means a quiet sound, as recorded in “Guan-tzu·Inner Industry”: “Only by cultivating the mind, can you gain the Tao.” “Tranquility” also means the ethereal silence. As “Tao Te Ching” says, “Great music has the faintest notes, the great form is without shape.” The two artists, Chen Yan and Guo Jianlian, have long been immersed in the splendours of mountains and lakes in Hangzhou, benefiting from the profound academic tradition of the China Academy of Art. Therefore, the two artists used different artistic creation methods to give an interpretation and response to the “tranquility” in the present.

Chen Yan’s paintings include the “Compose for Fei Lai” series, which is said to be sketched on the spot on the Fei Lai Peak in front of Lingyin Temple. These paintings were created completely on the surface of black silver gelatin. Chen Yan held the iron nail and iron bar, facing the ancient wooden horns on the peak, marking it on the vinyl surface. Fei Lai Peak is densely covered with ancient trees and lava coils facing the ancient temple. Flying around the rugged elbows, Chen uses thread to write down the life of trees and rocks. The tree and stone are silent, but they are affectionate, which is not easy to catch by a simple thread. The silver gelatin surface is not only slippery, but also reflective. Chen Yan’s painting traces are like felling, using the subconsciousness of the thread to densely compose the feeling. In the mountains and forests, she has drawn hundreds of sketches on paper. On the surface of the black rubber, she found a kind of crisp and bright pleasure, a feeling that was unexpected but suddenly. Sometimes she really has no idea what she had painted, and after a swift stroke through the light, she feels a vivid sense of pleasure. In all such crazy operations, her whole person fell into a silent walker, forgetting everything.

The group painting “Su Shi’s Day” is Chen Yan’s most diligent vinyl work. In the 4th year of Xining in Song Dynasty, a generation of writer Su Shi was released to Hangzhou, where he traveled all over the West Lake. Chen Yan imagined that Su Shi once trekked from the southern foot to Xiling Snow Mountain, traversed the West Lake, and surveyed the lakes and mountains. She not only sketched the situation of the mountain ridge with lines, but also rubbed the texture of the wood and stone directly on the rocky cliffs and flipped horns in the mountains. The natural texture itself is superimposed with the situation of the mountain, which expresses Su Shi’s super open-mindedness with the joy of landscape. A day in the mountains seems to be thousands of years in the world. With her eyes and hands, Chen Yan showed not only the real scenes of lakes and mountains, but also the coziness arising from the real scenes. Facing the light, what is presented here is a muddy scene, the moment when everything condenses before the vinyl is developed. At that moment through pictures, you see the romantic mountains, forests, as well as the mysterious concealment of the peaks. Those lines and shapes seem to be moving and walking. There was a loud sound, and the other peaks groaned. “Seven Days” is a group of works during the epidemic, and the poverty at home brings endless yearning. Seven days is the period of man’s fate. The frayed thread, like a struggle, is also like a starlight, guiding the exploration of traveling and illuminating the endless yearning of life.

Guo Jianlian paints with thick warm colors. He uses combs to paint jacaranda windows. Due to the texture of combs, his windows always feel like a wind curtain. It seems to be separated by a wind curtain, absorbing the indoor and outdoor scenery. Across the ripples of the bamboo curtain, the scenery is even more fascinating, making the general scenery a window view, and making the ordinary scenery full of mottled night. “Stacked Window”, “The Window of the Night”, and “Window to Window”, what they are facing is the world in the window. The lights are shining, the shadow of the rainbow is faint, the bamboo curtains are half-dangling, and the transparency of the rolled up is endlessly lingering. Across the shallow wind curtain, the night is maturing. Memories and the present, parting and reunion, everything seems to be happening. Afterwards, when the wind blows, everything will be taken away. This curtain of wind does have a kind of dream, vague, melancholic, tearful thoughts, and tender heart. Jianlian’s dreams just like a pot of old wine, dyeing ordinary homes red, and dyeing the night in the window drunk. Guo Jianlian has been writing dreams for more than ten years, with a curtain of wind and moon. No matter the night window or the folded window, he let his painted window become a wind window, and pour out his thoughts.

Guo Jianlian’s “Window of the Night” series depicts the splendor in the gloom, the emptiness in the splendor, and the alienation and loneliness in the emptiness. The sense of alienation between reality and the world is the usual theme of modernism, whether it is Kafka in literature or Edward Hopper in painting. In the experience of modernity, the artist seems to isolate the self from the world naturally and easily, forming self-isolated individual, as an island in the night of the world. They sit in a corner, observing the sky, origin and demise in the world.

Co-occurrence of the Artistic Conception of Tranquillity (Selected)

Vice Precident of China Federation of Literary and Art Circles, Director of Academic Committee of China Academy of Art

Nevertheless, Guo Jianlian’s estrangement enriches a different kind of noise and restlessness. “window of the night” and “rolling curtain” are not only isolation and shielding of the world, but also an intermediary for peering into the world, as well as the object that painter gazes at and paints. Both “windows” and “curtains” are intermediaries for partitioning and sheltering, but the painter does his best to eliminate their distinctions and barriers to space. The inside and outside of the window and the front and back of the curtain are unified on the painting plane by the same sway and freehand brushwork. The most eye-catching picture is the large area of paint scratches. This heterogeneous visual element, in addition to the painter’s fun and pleasure in his creation, also constitutes a peculiar material landscape. An abrupt form manages the illusion of contemporary painting’s self-dismantling, which has a certain paradoxical meaning, that is, only in the hiding of paintings can reality be revealed.

For many years, the art world still finds it difficult to get rid of a popular view that with the advent of photography, painting’s commitment to reality, which means that representation becomes no longer effective. Painters are digging their heads to find the reality that photography can’t reach, just as human beings do everything possible to reach the “back of the moon.” After all, the so-called “truth of painting” a hundred and fifty years ago has become an old modern myth in the 21st century. At this moment, Chen Yan confronts the dilemma between reality and illusion, object and ontology in contemporary painting in a straightforward manner. She suspended the illusory dispute between painting and photography, and directly faced the more specific and essential issues of form and shadow, concealment and appearance. Putting aside the familiar brushes and canvases, she directly portrayed the ghostly landscape, directly on the silver gelatin.

In our usual experience, photography seems to be the “amber of time”, which can seal up the elapsed time. However, photography itself is an event that takes place in time. The original name of photography is the writing of light, which summons its inherent temporality. In the inherent temporality of photography, the writing of light and the memory of the world together create a “theater of time”. All this happens on the thin occluder of film. The black and clean silver gelatin not only conceals, but also hides it. Chen Yan portrayed the landscape on the surface of the silver gelatin. The landscape was like Cezanne’s repeated deduction of the space structure in his later years, which also seems like the vastness of Huang Binhong’s light in works. The scenery painted by Chen Yan is weak and blurry, like a backlit cicada’s wings; it is a kind of memory and awareness, a mind that grows darkly and repeatedly in time. The silent and dreadful memory is transformed into the traces of corrosion and eroding years in the smooth and dark silver gelatin, creating a shadow of a dream and a relic of light.

Paul Varelli discovered early on that what Plato’s “Allegory of the Cave” describes is actually a huge black box: the world we live in is just a negative in the eyes of God. What art creates is just some observations and memories in the dark box of this world. Because of this observation and memory, painters conjure objects of gaze from the night of the world. The repeated additions on the canvas and the continuous depiction on the film are often for the purpose of showing in concealment. The display and appearance through obscuration is vast and tasteful. This is a process from “darkness” to “brightness”. In this process, the memories that have been inexplicably summoned in the gaze of the light are condensed into images. Beyond the light, the darkness seem more grand. As I stared, everything in the world became mysterious and woeful again.

Tranquility, Appear in the Shadow (Selected) 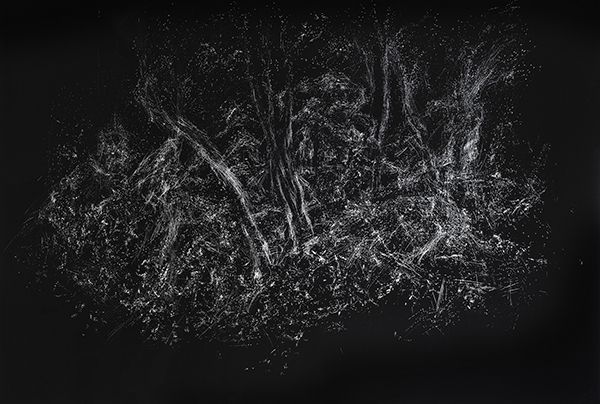 Chen Yan One Day of Su Shi No.1

Chen Yan One Day of Su Shi No.2

Chen Yan One Day of Su Shi No.3

Chen Yan One Day of Su Shi No.4

Chen Yan One Day of Su Shi No.5

Chen Yan One Day of Su Shi No.6 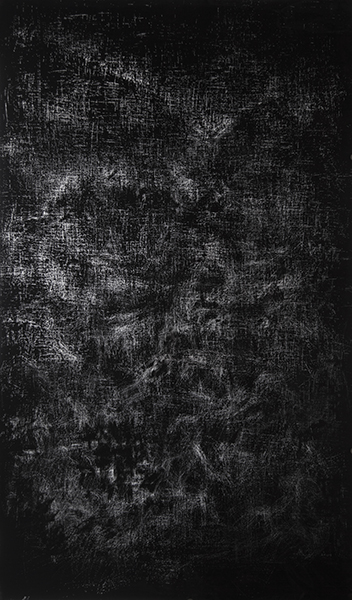 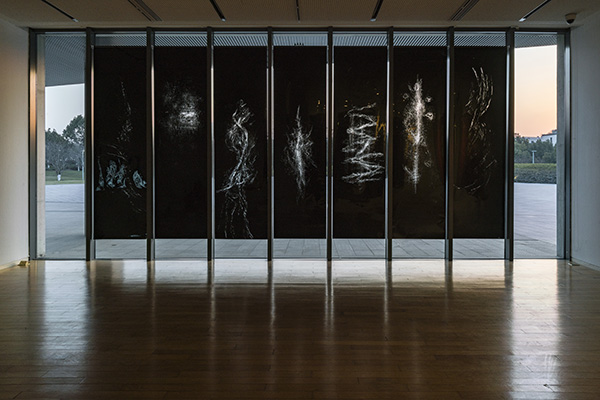 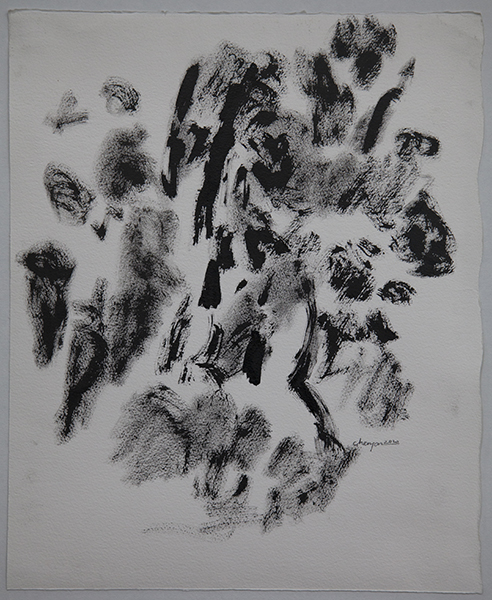 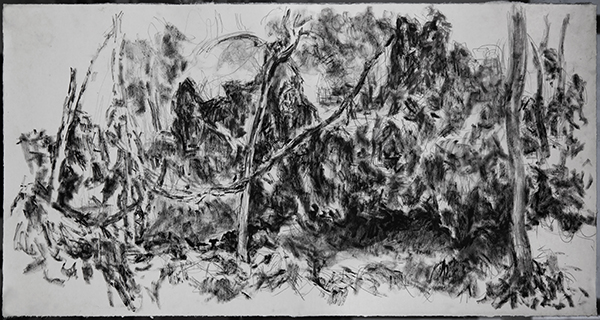 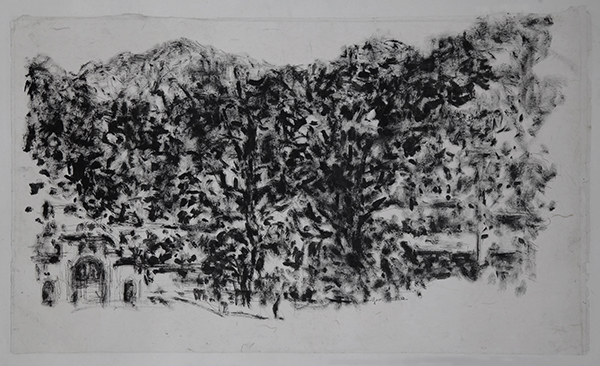 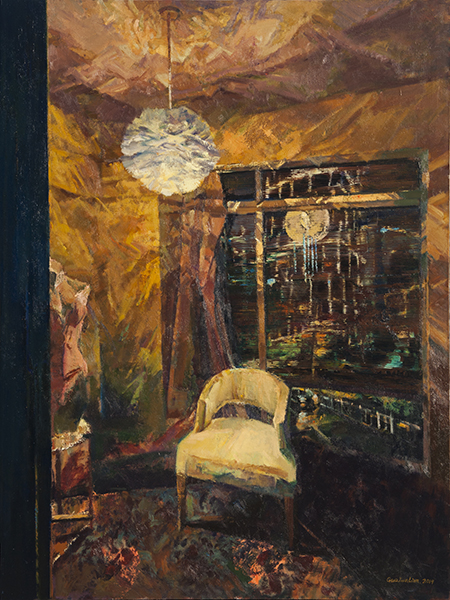 Guo Jianlian   Window of the Night – Entanglement No.2 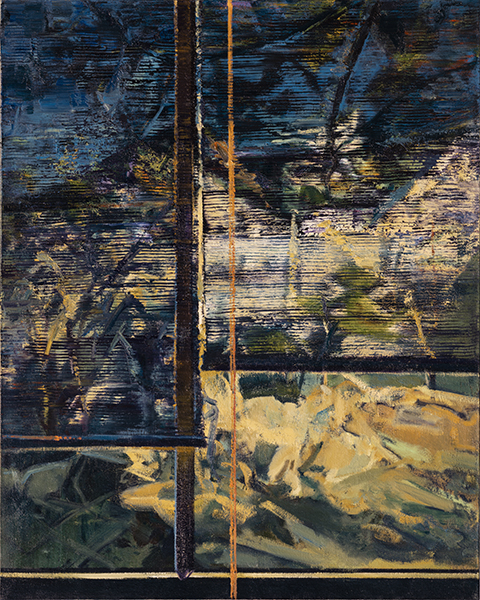 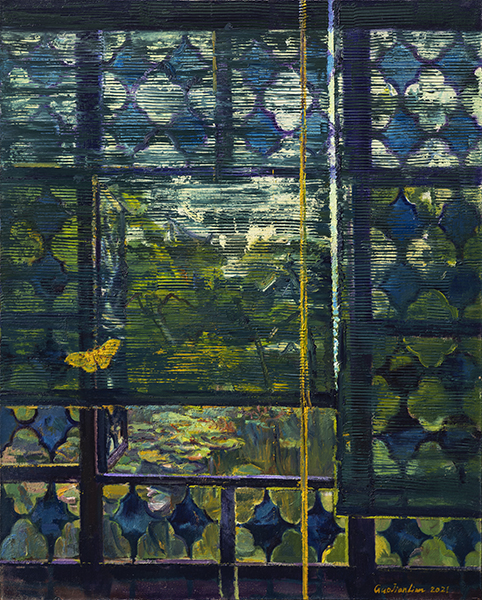 Guo Jianlian   The Gapped Classical Gardens – Eye of the Moth Guo Jianlian   The Gapped Shades No.7 Guo Jianlian   Window of the Night – Inviting the Moon 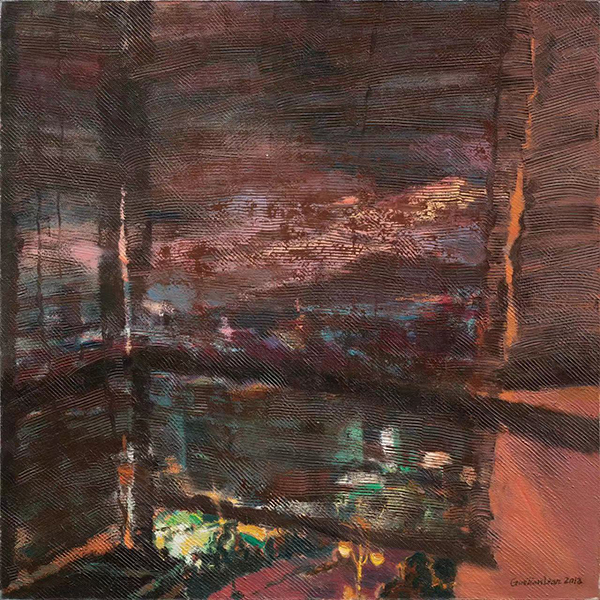 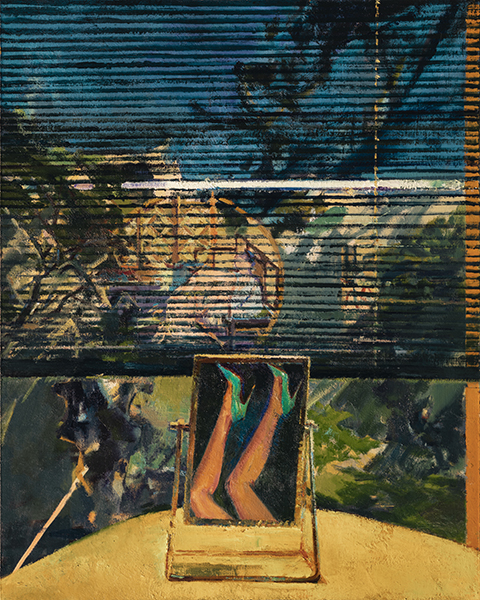