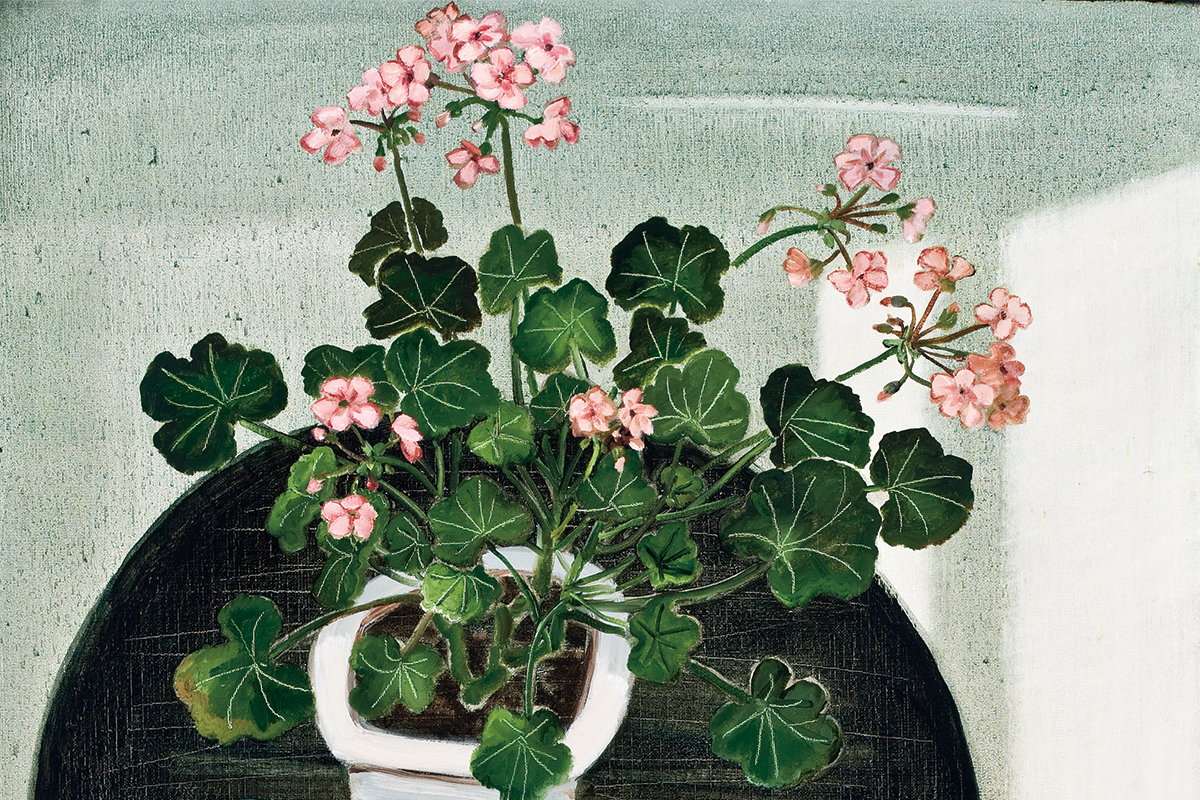 I made my home amidst this human bustle, Yet I hear no clamour from the carts and horses. My friend, you ask me how this can be so? A distant heart will tend towards like places. From the eastern hedge, I pluck chrysanthemum flowers, And idly look towards the southern hills. The mountain air is beautiful day and night, The birds fly back to roost with one another. I know that this must have some deeper meaning, I try to explain, but cannot find the words.

Dong Shawhwei, born in 1962, graduated from the Department of Fine Arts, at the National Taiwan Normal University. She is known for her nostalgic Courtyard and quiescent Still Life painting series. In early June, the Twin Oaks Estate in Washington, D.C., selected her work for exhibition. Through this exposure, important international friends get a chance to have a better understanding of Taiwanese art and its artists.

Having studied in Europe, Dong Shawhwei was influenced by impressionist artists such as Claude Monet (1840-1926) and Pierre Bonnard (1867-1947). Nevertheless, she concentrated on studying Zhuangzi’s philosophy. Her works are imbued with a reserved and serene quality, echoing the spirit of “things and man united as one.”

In 2006, the artist learned that her old Japanese-styled house was to be demolished, and gone with it included the courtyard where precious memories were abundant. Feeling rather attached to the various plants and seasonal changes taking place in the garden, Dong felt the urge to depict her surrounding environment. Through her concentration on painting, Dong was able to attain a certain spiritual meditation and to make her mind roam freely through ordinary objects, abiding her state of being with Zhuangzhi’s aesthetic philosophy of “quiet and inaction.”

Having painted for 30 years, Dong continues to challenge herself in technique and composition in pursuit of spiritual space. She incorporates Eastern philosophical ideas into Western medium expression. In terms of composition, the artist meticulously place ordinary objects with distorted figure on canvas, and through the interactions between pigments, light and shadow, and intensity of the brush strokes, these still images seem to generate visual movement. The “thin coating” of pigment also imbues the painting with a visual affect similar to that of traditional Chinese ink-painting, giving life to paintings. Recently, the artist has been exploring larger creations, aiming to train her structural awareness. She has been expanding the Courtyard series to incorporate Chinese traditional screen painting series and mounted book form. Each painting consists of 2 to 5 panels, which can be viewed independently or together to create a lyrical continuity. It symbolizes life’s progression and propagation. For viewers, it is a transformation from spatial to temporal, fully capturing the artist’s scrupulous structural awareness.

“To create works that reflect deep Chinese cultural heritage and meaning through the use of Western medium and structural composition, is a cultural achievement nourished by the land of Taiwan,” the artist said. The still life images under the painter’s brush have transcended from physical appearance into a spiritual realm. These paintings are evidences of artist’s moment of “existence” that answer to life’s pureness, simple wishes, and pursuit.

Gentle Breeze on a Beautiful Day

Scene of Rain I