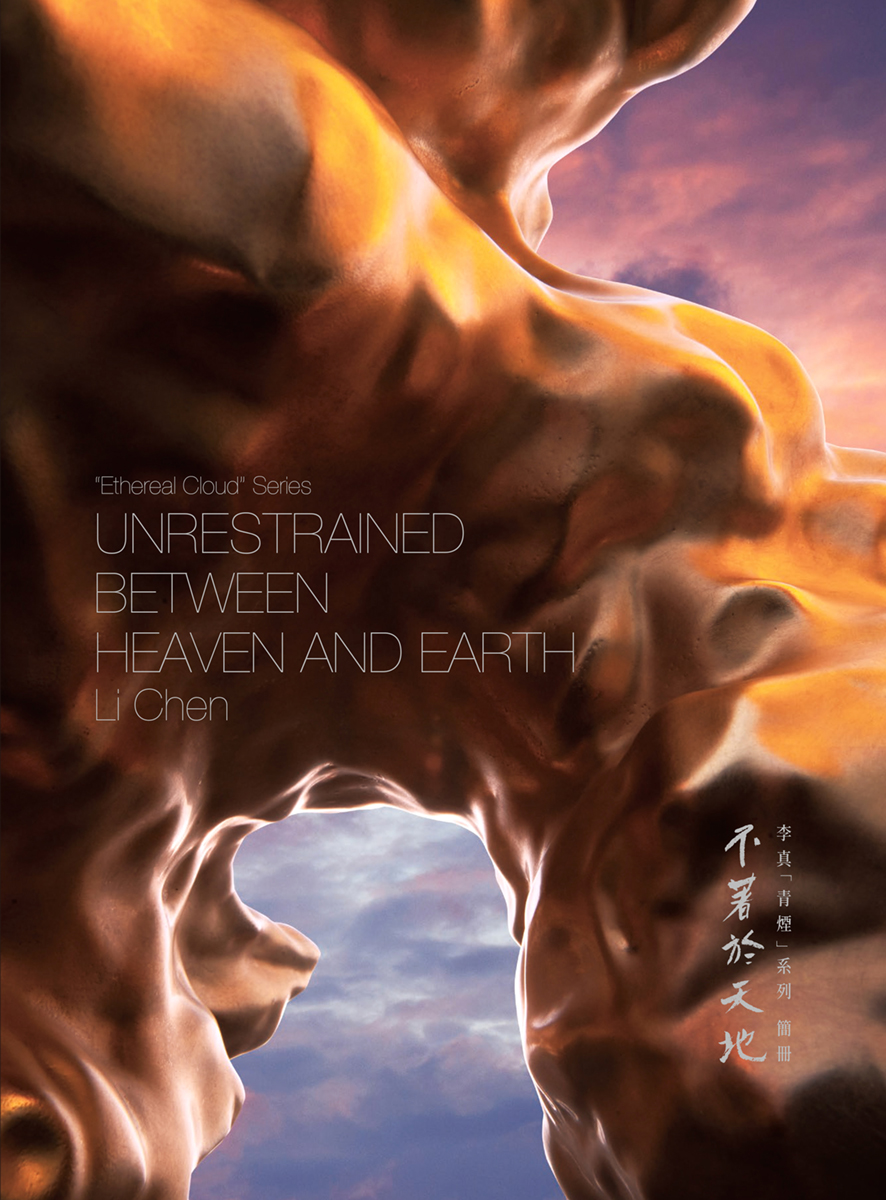 Is Ethereal Cloud a form of memory? Or is it an emancipated soul? Our most instantaneous impression of Ethereal Cloud is its transient and fleeting nature; it is texturally light yet endlessly velvety, even imbued with warmth – is it the fragrant smoke of an incense stick? Or it could be a whiff of longing floating into oblivion.

From Li Chen’s pre-millennial works, Sun Wukong (The Monkey King) (1993) to Cloud Glider (2000), we can see symbols of the traditional auspicious cloud reappearing, and the element of “cloud” was also used continuously in the Spiritual Journey through the Great Ether series. There began the first stylistic changes, as the manifestation of cloud transitioned from symbolism to realistic representations; works such as Float to Sukhavati and Soothing Breezes Floating Clouds often adopt the cloud element to evoke a sense of “spiritual journey”, immersed in complete serenity and leisurely joy; consequently, the Spiritual Journey through the Great Ether would become one of Li Chen’s most recognizable series.

Li Chen has  previously showcased archetypes of the Ethereal Cloud series in 2011–Fleeting Wisp, Moving On, Mood Swing–fully displayed the imagery of drifting smoke and human consciousness, yet this transformation is both schematically designed and naturally incubated. For instance, Visiting Fairyland of 2004 and Riding the Wind of 2007 of the Spiritual Journey through the Great Ether series had already foreshadowed new formative possibilities (1993-2011). Now, the Ethereal Cloud has taken shape, and possesses its own unique sculptural entity.

How does Li Chen interpret and translate sculptural abstraction through Ethereal Cloud beyond its physical form? He stated, “The Ethereal Cloud series as a whole is deliberate but also an expression without intent, a nonexistence of consciousness.” Can this concept of “nonexistence” be categorized as Li Chen’s Eastern expression of abstract sculpture? When compared with Western sculpture’s abstract structure – from geometric, minimalist to the rational expressions of industrial abstract forms – the differences in both forms of abstractions are evident and endlessly intriguing.

Li Chen’s reimagined Ethereal Cloud appears in the form of surging currents and radiating sunlight, rays of golden sunset and deafening darkness; “cloud” as a fluid matter has begun manifesting its unrestrained characteristics in distinct forms. These ever-changing sculptures of smoke and clouds rise and swirl like a dragon, taking shapes of mountains, water and fire, strange rocks shaped peculiarly as text, human figures, nectar, blossoms, withering trees, and beasts… they appear so curiously odd. Their presence induces an “extraordinarily bizarre” feat that is both highly grotesque and self-reproductive.

Expertized in creating a dialogue with materials, Li Chen breathes warmth into the otherwise frigidly icy stainless steel and evokes such striking form. The organic visual reflection peeking through the layers of silver clouds as well as the imagery and fluidity in a four-dimensional space are so vibrant and brilliant. The darkness of Eclipse remains silent no more as the subdued gold is both dense in mystery and misty fogs; although the works refrain from directly portraying the sun, the beams of sunset are disclosed through their reflected illumination upon the outstretching horizon. His alchemist-like touch also enriches bronze sculpture with a unique effect of “fantastical matte gold”. Referring to Radiance, Multitude of Altitudes and other works, Li Chen exclaims, “Devoured between the endless skyline of monumental mountains and surging clouds, the sun dissolves into radiant hues of melted gold.” These sub-series can be regarded as spontaneous visual marvel, undoubtedly symbolic of the essence of the Ethereal Cloud series.

As we look at Li Chen’s creative career, from Energy of Emptiness, Spiritual Journey through the Great Ether, Soul Guardians, The Beacon, Ordinary People and the latest Ethereal Cloud, each series comprise into an immense system so intricately interlaced. We may only scratch on their connections on the surface yet be unaware of the depth of Li Chen’s creative world as he has grown so adept at softening the poignant consciousness within his works. In the Soul Guardians and Ordinary People series, Li Chen transformed his ideas through a much gentler sculptural rhetoric. Whereas in the work Forsaken Relic of the Ethereal Cloud series, the delivery is much more definite as he quotes, “Worldly treasures golden as youth, are merely objects forsaken by Heaven, yet our hearts rest tranquil, as we enshrine this divine Hairpin with utmost faith.” The linguistic contrast established between each sub-series further distinguishes the Ethereal Cloud as a new breakthrough.

Should one delve deep into Li Chen’s sculptural world, the perceptive observations from Fan Di’an, Director at the National Art Museum of China, can be recollected: “Li Chen has found solutions to at least three issues concerning contemporary sculptural art, the existing conflicts within each issue are interconnectedly unified with other issues into one overarching system, thereby conceiving and achieving a new foundation. Firstly, unification of the worldly and the transcendent; secondly, unification of the West and the East; thirdly, unification of materials and spirit.” Such observation indeed has its reasonable argument, as modern and contemporary art are developed within the Western “discourse”, where its dominant influence has become a disruption of the creative process, then how can an artist rethink, integrate, and rebuild their own culture? Perhaps what Li Chen seeks is the abstraction of “nonexistence”, pioneering new possibilities of Eastern sculptural expressions.