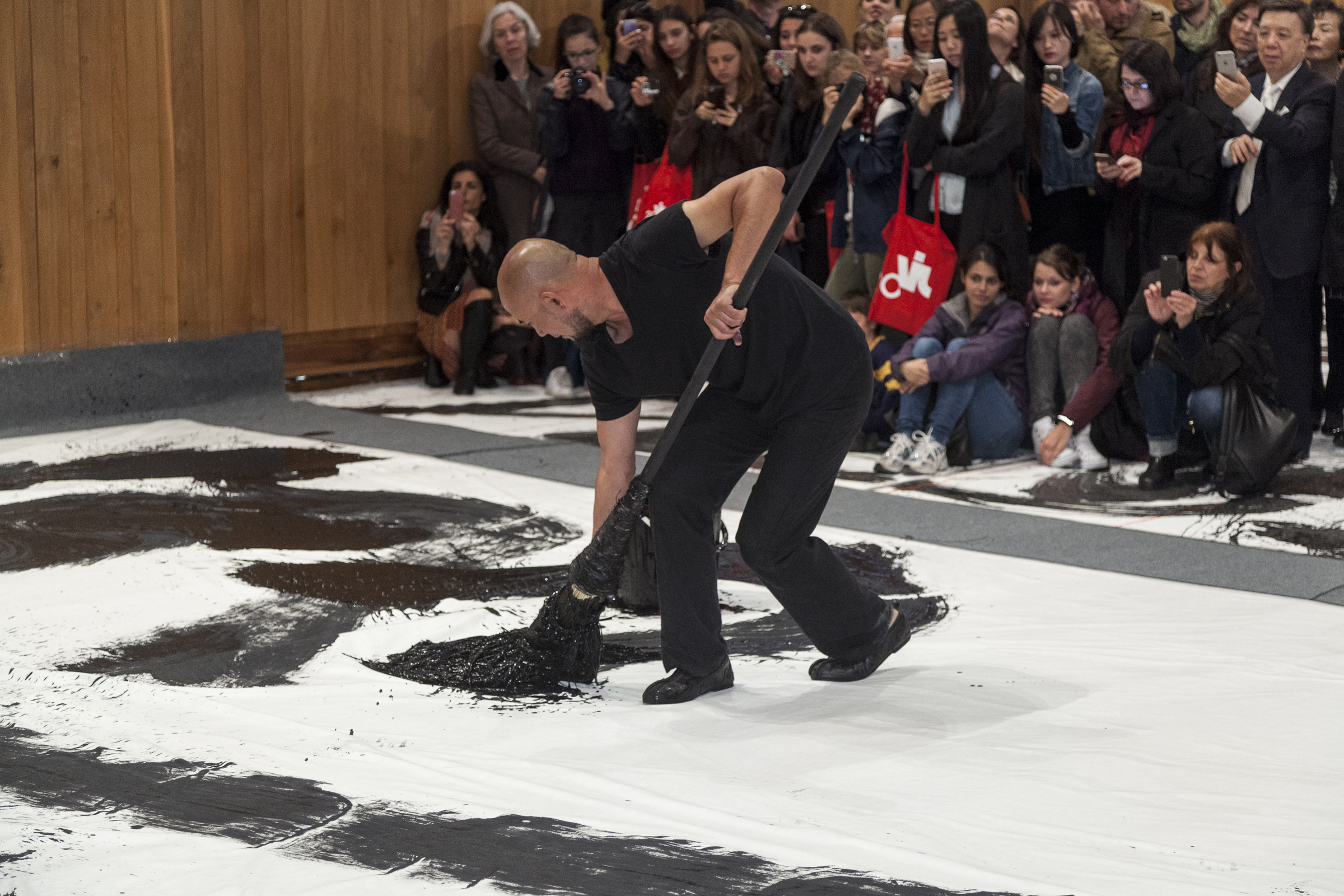 After Qin Feng’s first solo exhibition in Taipei earlier this year, the artist is invited for his solo exhibition “Waiting for Qin Feng,” in Venice from May 19 – June 19, 2016. Installed in three locations including the former Monastery of San Giorgio Maggiore, now home to the Fondazione Giorgio Cini (the first contemporary Chinese art installation), The Armenian Catholic Monastery on San Lazzaro Island and Venice International University (VIU) on San Servolo Island, the exhibition will be presented in collaboration with the Fondazione Giorgio Cini and is curated by Achille Bonito Oliva and Ambassador Umberto Vattani. 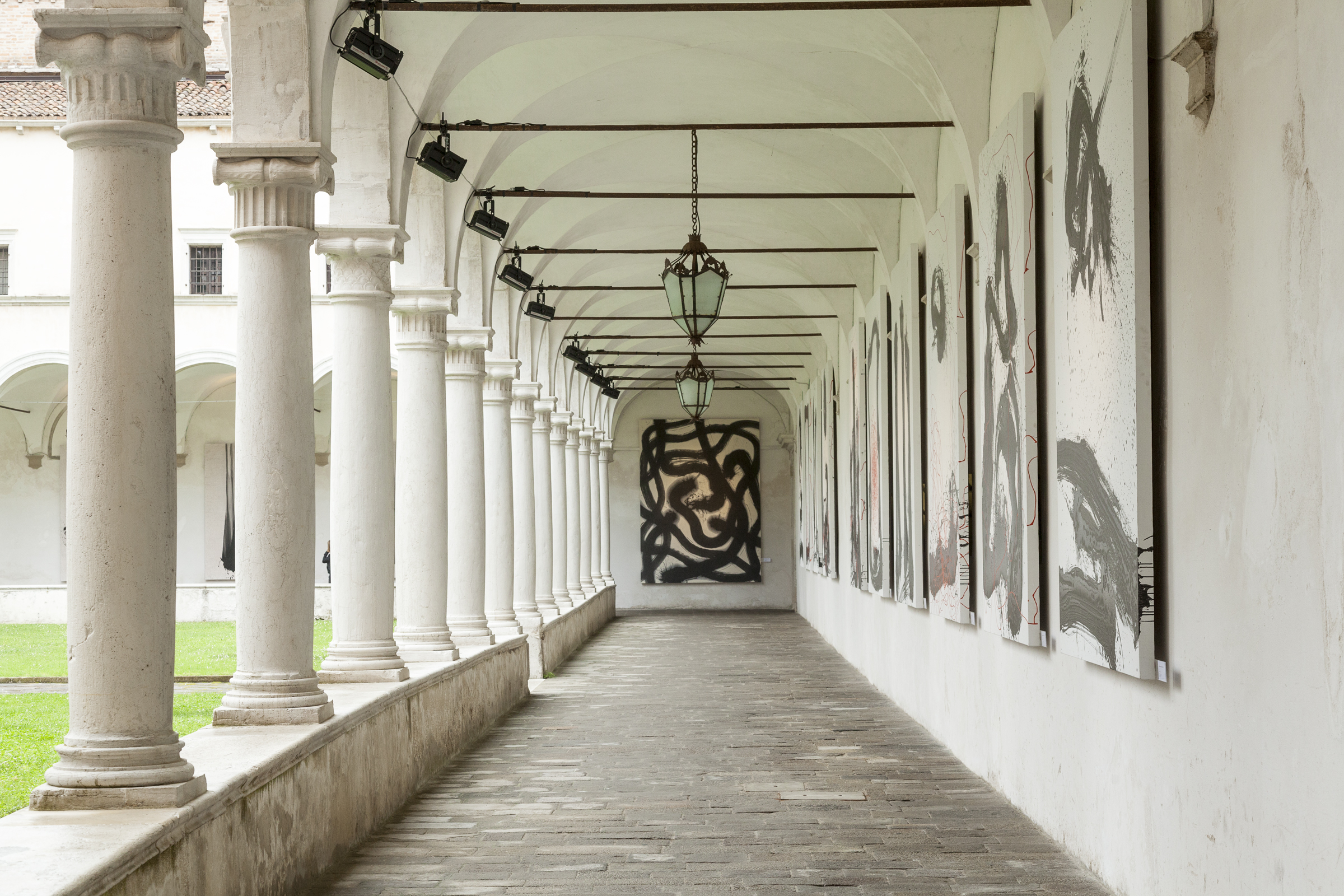 The Venice exhibition will unfold as a multi-faceted dialogue between European Renaissance art and contemporary Chinese art. The conversation will manifest itself in a number of ways Including Qin Feng’s on-site painting performance in front of Paolo Veronese’s The Wedding at Cana, a facsimile realized by Factum Arte, Madrid, which is in the Refectory of the former Monastery of San Giorgio Maggiore. A large canvas will be placed on the floor in front of the painting on which Qin Feng will execute his work. 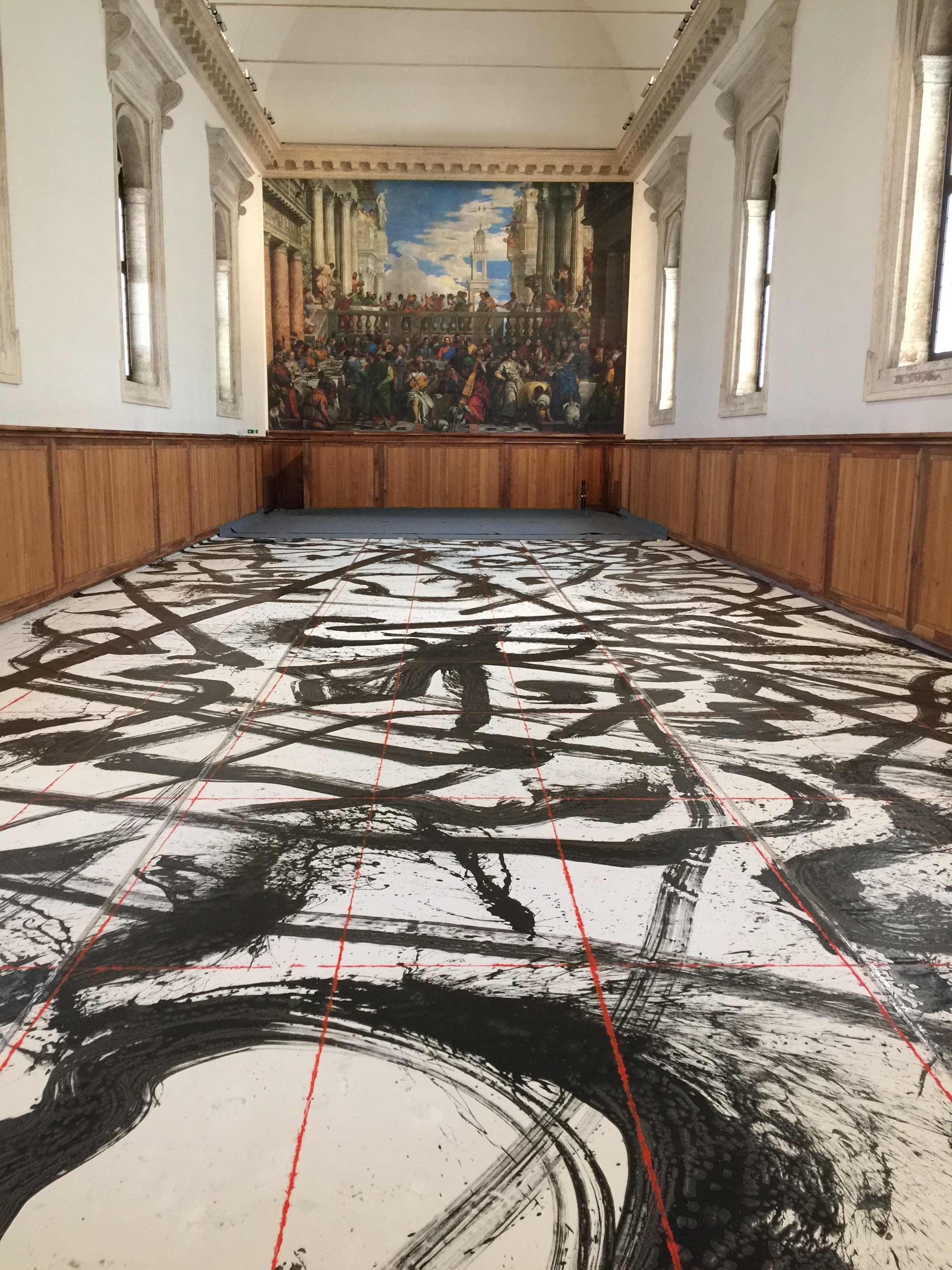 Other exhibition highlights include an installation of traditional Chinese Jingdezhen porcelain and other works in the historic Armenian Catholic Monastery, and at Venice International University. It is Qin Feng’s hope that this exhibition will be the beginning of a new “Silk Road” for cultural exchange; an opportunity to create an all-inclusive art world. 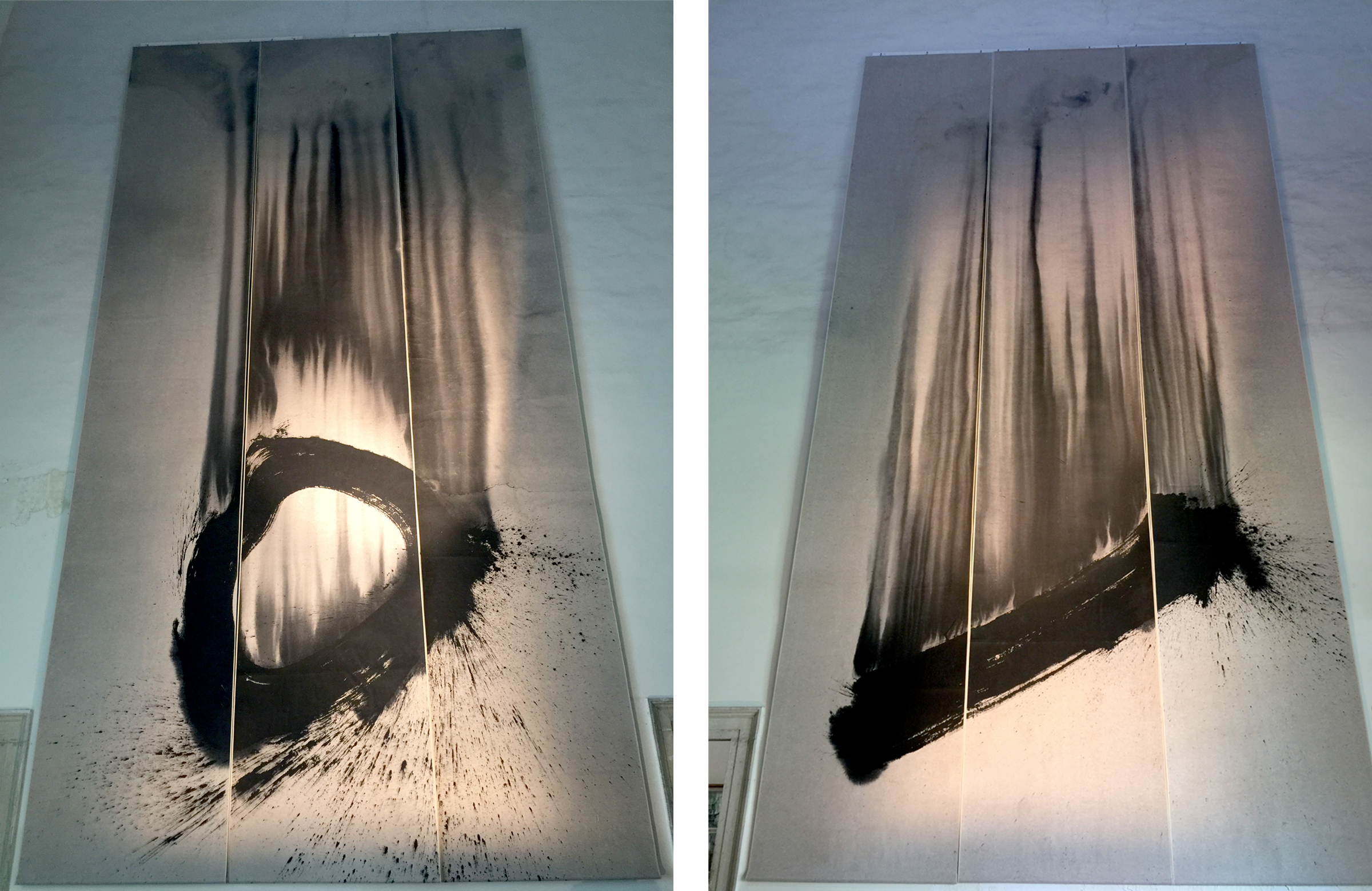 “Waiting for Qin Feng” is timed to coincide with the Venice Architectural Biennale whose theme ‘Reporting From the Front” is a call to architects to consider their role in the improvement of living conditions for people from all walks of life. 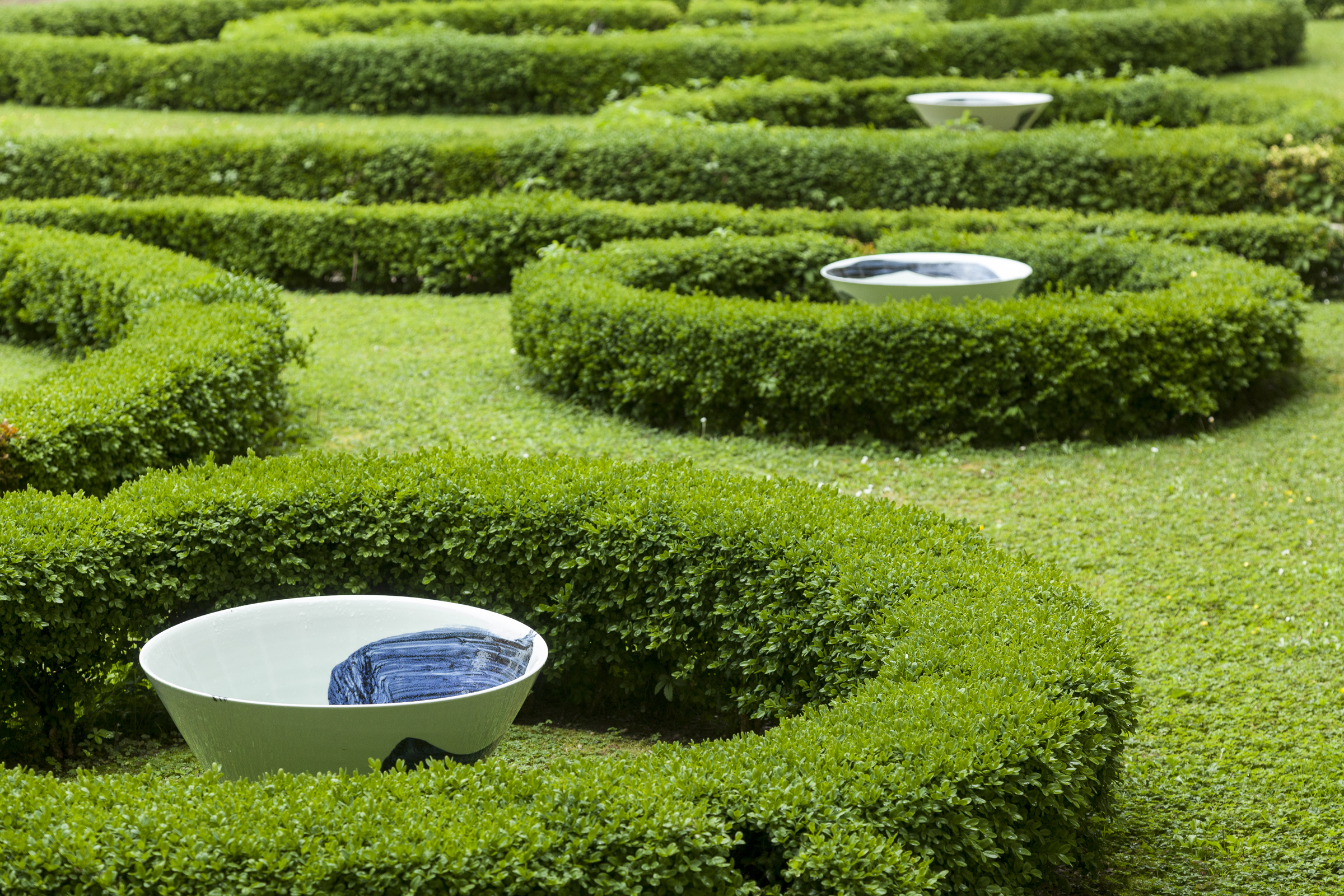 This concept is mirrored in Qin Feng’s exhibition that promotes the importance of inclusivity and cultural interaction as a result of the greater understanding of our contemporary civilization through open dialogue.

Qin Feng was born 1961 Xinjiang, China, Qin Feng graduated from Shangdong Art Institute, China. Feng is renowned for his ink work. Using traditional Chinese calligraphic tools, he employs the brush with the unrestrained energy of the European Abstract Expressionists, combining the gestural impulses of Western action painting with the tradition of Chinese calligraphy painting. His important solo exhibitions include exhibition at the Patricia and Phillip Frost Art Museum in Miami and Desire Scenery – Qin Feng Solo Exhibition at the Shanghai Art Museum in 2012, exhibition at the Museum Artpavillon Haus, Kt. Luzern, and Basel Art Center in Switzerland in 2015, and solo exhibition at the Asia Art Center Taipei in 2016; his important group exhibitions include Brush and Ink: The Chinese Art of Writing at the Metropolitan Museum of Art in New York in 2006, Fresh Ink – Ten Takes on Chinese Tradition at the Museum of Fine Arts in Boston in 2010, group wxhibition at the Museum of Modern Art in New York in 2013, The vibrARTion Project – Forms of the Formless – Exhibition of International Contemporary Art Switzerland 2014 at the Swiss St Urban Museum of Contemporary Art and Rendering the Future – Chinese Contemporary Ink Painting Exhibition at the Asia Art Center Beijing in 2014, and 56th Venice Biennale in 2015.

Achille Bonito Oliva is an Italian contemporary art critic and curator based in Rome, where he is a professor of History of Contemporary Art at La Sapienza University. Bonito Oliva has curated thematic and interdisciplinary exhibitions, including Contemporanea (Villa Borghese, Rome, 1974), Aperto 1980 (together with Harald Szeemann, Venice Biennale, 1980), Avanguardia Transavanguardia (Mura Aureliane, Rome, 1982) and Minimalia (P.S.1 Contemporary Art Center, New York, 1998). He directed the 45th Venice Biennale (1993), the 1st Valencia Biennale (2001), and was the curator of the Italian Pavilion at the 7th Paris Biennale (1971). He has been awarded several prizes and recognitions, including the Valentino d’Oro, an international prize for art critics, in 1991.

Ambassador Vattani has had a distinguished career in service to the Italian government for many years. In 2005 he was appointed President of the Council of Ministers’ National Institute for Foreign Trade (ICE). Under his presidency ICE launched “Made in Italy” merging economics and culture. This highly successful marketing campaign celebrated the high quality and sophistication of Italian luxury goods. It also included partnerships with universities and research centers worldwide as well as many restoration projects in Italy and other countries. For his role in support of culture, he has received awards from the heads of state in many countries.

About The Fondazione Giorgio Cini:

The Fondazione Giorgio Cini is a non-profit cultural institution based in Venice, Italy. It was established by Vittorio Cini in memory of his son Giorgio, with the aim of restoring the Island of San Giorgio Maggiore (devastated after 100 years of military occupation) and of creating an international cultural center that would re-integrate the Island into the life of Venice. The Fondazione Giorgio Cini’s mission is to promote the redevelopment of the monumental complex on the Island of San Giorgio Maggiore and encourage the creation and development of educational, social, cultural and artistic institutions in its surrounding territory.