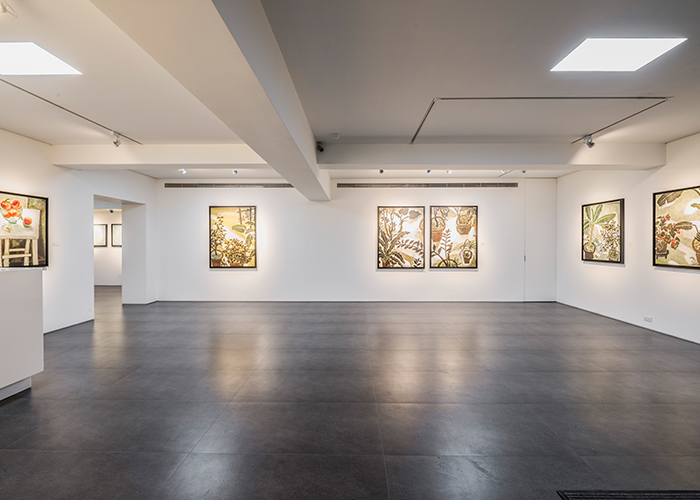 Letting the mind soar free from the material things

Notable intellectual and historian Xu Fuguan mentions in his book The Spirit of Chinese Art that the artistic main body is in fact the “heart” in Zhangzhi’s thinking. On December 21st, artsit Dong Shaw-hwei hosted the opening of “Unfettered Heart: Dong Shaw-hwei New Works Solo Exhibition” at Asia Art Center Taipei I, drawing large crowd of art lovers. Collectors who have been following Dong’s works observed that these new works are distinguished from the past in that they are informed with more Chinese ink-painting element and literati sentiment; her impression of “courtyard” has sublimed into abstracted inner vision. Dong has indeed attained more Eastern spirituality in addition to the quiescent still life painting.

Dong Shaw-hwei, born in 1962, graduated from the Department of Fine Arts at the National Taiwan Normal University, and who has been creating relentlessly for over 30 years. Dong Shaw-hwei was influenced by Impressionist artists such as Claude Monet (1840-1926) and Pierre Bonnard (1867-1947). Nevertheless, she concentrated on studying Zhuangzi’s philosophy. In addition to her academic achievement which is evident in her publication The Significance and Aesthetics of Zhuangzi, she further puts art theories into practice. She incorporates Chinese classic philosophy with western medium and art form, revealing her transcendental vision of “letting the mind soar free from the material things.”

During the opening, General Manager of Asia Art Center, Steven Lee, expressed his fascination for Dong’s artistic energy after undergoing a period of cultivation. Renowned designer Apex Pang-Soong Lin also attended the opening of his “talented schoolmate” who he so highly-praised, and whose new works always inspire him to “create” immediately. Ba Dong, Chief of Research Division of National Museum of History who is also Dong’s husband, also gave a detailed analysis of displayed works, pointing out to the audience that the harmonious composition of Dong’s painting is a representation of Zhuangzhi’s “tranquil observation.”

From Courtyard-Idyllic Charm in Summer Shade I&II and Gentle Breeze on a Beautiful Day, one can sense the dialectic relationship informing by the composition, and emphasis on “emptiness” and “nothingness” in Eastern philosophical aesthetic. “To slowly rid of colorful decorative subject and to fully master the strength of painting,” is Dong’s artistic goal. In contrast to the shadowy space of previous Courtyard series, new works Courtyard-Spring Excursion I&II and Courtyard-Spring Fog I&II are rather light in color showing how the image of courtyard has transformed from realistic observation to abstract impression in her memories.

Through her concentration on natural surroundings—vitality of lives and seasonal changes, Dong was able to attain a certain spiritual meditation and to make her mind roam freely through ordinary objects, abiding her state of being with Zhuangzhi’s aesthetic philosophy of “quiet and inaction.” Dong has evidently lived up to the idea of Xu Fuguan where “The highest achievement in art lies in the art of life.”