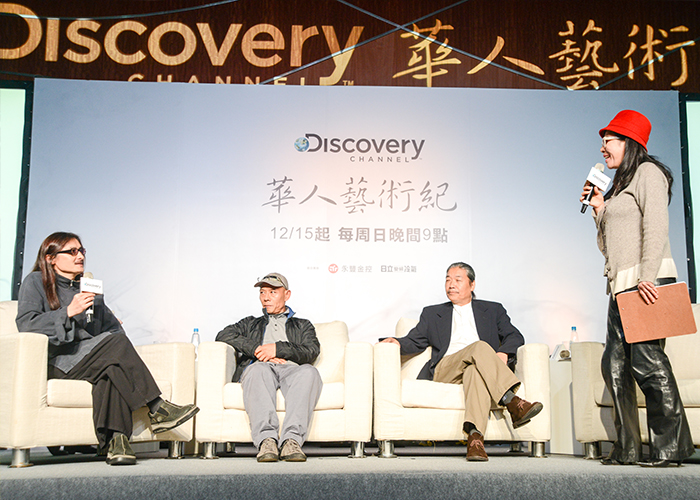 The rise of Chinese in the 21st century can be witnessed in every aspect of the international society. Whether it’s economics, culture or politics, China has become a power to be reckoned with. Along with the rise, contemporary Chinese artists have also begun setting trends and become a new force. Discovery Channel is proud to be the first international TV network to gather some of the most internationally recognized Chinese artists to produce Chineseness, a four-part documentary series. Each one-hour episode in Chineseness is dedicated to a different Chinese artist, who include Yang Chihung and Li Chen from Taiwan and Zhang Huan and Xu Bing from China. On December 9th, Yang Chihung, Li Chan and Zhang Huan attended the press conference for the premiere of Chineseness. Tommy Lin, General Manager of North Asia, and Kevin Dickie, Senior Vice President of Content Group, also showed up to celebrate the event. Each artist presented their representative works onsite and exchanged ideas with interested audiences ranging from young students to art collectors. Many appreciated the opportunity to talk face to face with the artist.

The series airs every Sunday starting December 15th 2013 at 9p.m. in Taiwan, and every Sunday starting March 30 2014 at 9p.m. across South East Asia. The show will take viewers deep into the minds and lives of these artists and discover their unique styles and sources of inspiration. It will look at how they translate their philosophy of life through art, and how their heritage and Chinese background has influenced their work.

Tommy Lin, Discovery Channel’s General Manager of North Asia, said at the press conference: “Discovery Channel is good at telling stories with vivid images. Over the years, we have been leading the audience to explore lives and everything around us; we made a documentary on Ju Ming, and produced Chinese Art Bibliography and Eastern Art Bibliography series. InChineseness, we took a step forward to include distinguished artists from China and from Taiwan. This program involves two production teams and more than 7 months of filming across the globe from Taiwan, Beijing, Tibet, New York, Paris, London, to Venice. Viewers will be given an inside look at how the artists transpire their independent ideologies through their work by observing their progression through life and how they have claimed their place on the international stage.”

Kevin Dickie, Senior Vice President of Content Group, also flew over from Singapore to celebrate the event, “Discovery Channel has been launched in the region for nearly 20 years, and we continue to uphold the spirit of producing programs around local issues in accordance with international standard on quality, so that our global audience can see the different aspects of Asia. Discovery Channel is honor and proud to present the first program that focuses on the rise of Chinese contemporary art. Through understanding these four artists’ works that embody deep cultural background, the international audience may appreciate the versatility and creative energy in Chinese culture and contemporary Chinese art nowadays. Chineseness will also be aired in 23 countries in Asia starting February in 2014, and there will be over 100 million viewers who could see this wonderful series.”

Yang Chihung was born in Taiwan and now split his time between New York and Taiwan. He is not only a creative artist but also a theorist of the field. The show praises him as the “Marco Polo of Asia” who has brought Western art philosophy into the Asian world, reflecting on his 40-plus years devoted to art and creativity and focuses on how his unique form of abstract art merges Eastern brush strokes with Western perspectives. At the press conference, his recent work of 2013 “Tempest” was on display, one sees Yang has used more black in his work as the influence of Chinese calligraphy begins to have an obvious impact in his abstract paintings, and the clear merger of both Chinese water color and Western drawing is becoming more evident than ever. This has contributed to more balanced visual impact. Yang said: “Since most people do not get the chance to know the artist in person, I wish my painting can reveal who I am, my emotions and feelings.”

Li Chen, who just finished hosting his solo exhibition at the Place Vendome in Paris, brought his representative works from Spiritual Journey Through the Great Ether and The Beacon series. The signature style of Li Chen’s sculpture is using Eastern culture as the core to incorporate language of contemporary art. Li believes that humans need to pursue the satisfaction of the soul and heart, and there is no boundary in such pursuit. His art work has redefined Chinese sculpture and has taken this medium from a commercial status to the realm of art on the international market. “Art has no boundaries. It is something internalized, an appreciation and exchanging in the spiritual level,” Li Chen said.

Zhang Huan is one of the most controversial Chinese contemporary artists, “My New York,” done for the 2002 Whitney Biennial, saw the artist wearing a suit made from raw meat. He feels the most important mission of being an artist is to bring out questions on society and on arts, to look at the world with new perspective, and to create works with contemporaneity. In recent years, Zhang uses incense ash to create. For Zhang, ash isn’t just ash. It is the collective memory and soul of a nation. By using ash as the medium, Zhang tries to show the drastic change in social values due to a rapid economic advancement and goes on to talk about the philosophical question of existence and dissipation.

Xu Bing of China takes the ancient art form of Calligraphy to new heights by creating a new style with roman alphabets. Using symbolic visuals to create new imageries which have given Chinese characters a new life, Xu sees how philosophy can be transpired through writing. His work has unveiled his unmatched talent and creativity in calligraphy and graphic art. At the press conference, his “Magic Carpet” created for the first biannual Singapore Art Exhibition in 2006 was on display. Although Xu Bing was not able to attend the conference, he managed to share his creative concept through previously recorded video: “If Chinese characters are text images, then my New English Calligraphy texts are made of characters in disguise. I am mostly interested in rebooting people’s conventional thinking patterns through my work. Changing the words is to touch on the fundamental element of human civilization,” Xu said. 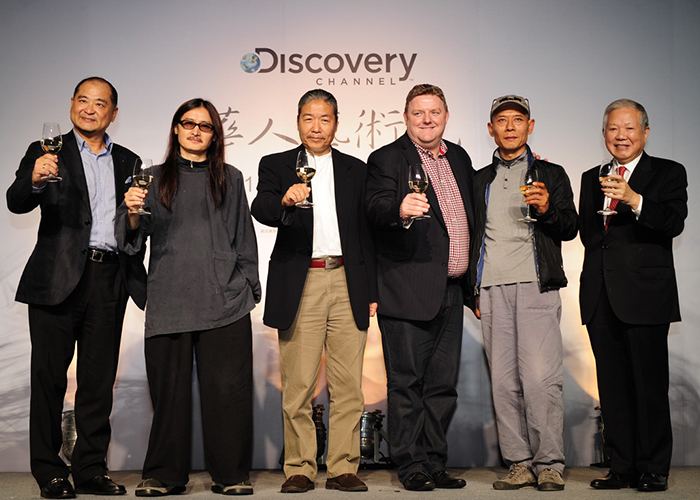 The “soft power” of Chineseness stands firm on the World Stage

At the press conference for the premiere of Discovery Channel’s Chineseness, artists were invited to talk about their creative concept and influences; collectors and important figures from the art scene were fascinated by the profound Chinese philosophy and cultural heritage, indeed showing the eminent role of Chinese “soft power” in a global context. The opening of press conference was mark by a glorious toast between three artists and VIP guests on the stage to witness a new page in the international art history.

The four artists bring a wide range of art form from oil painting, ink painting, calligraphy, sculpture, performance art, to wood carving, from which we understand the intricate thinking behind each work and are invited to participate in retrospective journeys through their lives. Follow Chinesesness on the Discovery Channel from December 15th at 9pm every Sunday in Taiwan to see how four of the greatest contemporary Chinese artists revolutionize art.

Discovery Channel, the flagship network of Discovery Communications, is devoted to creating the highest quality non-fiction programming in the world and remains one of the most dynamic networks on television. First launched in 1985, Discovery Channel now reaches more than 192 million subscribers in Asia-Pacific. Globally, Discovery Channel is one of the world’s most widely distributed television brands, reaching 432 million subscribers in 224 countries in 45 languages. It offers viewers an engaging line-up of high-quality non-fiction entertainment from blue-chip nature, science and technology, ancient and contemporary history, adventure, cultural and topical documentaries. For more information, visit www.discoverychannelasia.com.