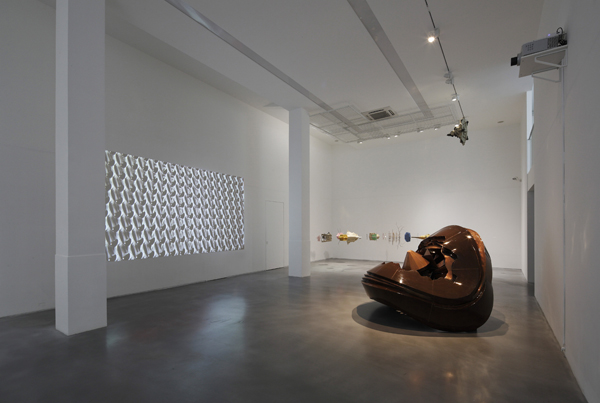 A+ Contemporary is pleased to announce the opening of “Evolution of Model” curated by Bao Dong, a distinguished art critic and independent curator based in Beijing, on the day of 21st November, 2015. Exhibiting artists include: Cai Lei, Chen Xi, Cho Mi Young, Gao Weigang, Ji Jun, Tan Tian, and Wang Yuyang. The exhibition will span until 17th January, 2016.

“Model” is a standard or example for imitation, comparison, and actual practice; similar terms and concepts include: schema, paradigm, and pattern, which have been widely used in different contexts and across disciplinary. In the field of art, “model” can refer to some visual paradigm exited in traditional arts teaching such as recognition of: geometric body, plaster statue, anatomical diagram, perspective drawing and etc. as well as identification of an artist’s choice of a “motif”— recurrent pattern or design in the artwork. In fact, the painting manual and Model used for traditional painting training are perfect examples of “visual models”. To do sketches from nature is by itself a learning process of developing one’s visual cognitive structure. “Motif” is thus the result of combining an artist visual model (through learning) with some topic elements, such as the connotation of frequent appearance of pine, bamboo, plum, and orchid in the Chinese art history, as well as lotus decoration, acanthus pattern, and more. In a way, traditional art history reveals the evolution of our visual cognitive models.

In this exhibition, “model” is present on three planes. The first being an actual model, like the mould and module in sculpture; second, there is a fictional or imaginary model, like the many visual models and kinetic models used in simulation software, as well as the paradigms existing in the consciousness of artists and audience. Third, we have the model of knowledge, like the framework of artworks’ database and other various models of art discourse. In a specific case, these three “models” are often situated in a nested structure, while modules are frequently used in sculptures, the creation of module structure is in conflict with paradigms in the brain, and paradigms inevitably are influenced by all art discourses, while, at the same time, these discourses latch themselves onto the physical matter of art, known as the execution of matters.

Model is not a tangible, individual existence, its intrinsic value an abstract cognitive and practice framework, and the consciousness of self within this framework is simply a methodology of consciousness. On the other hand, models always involve an original, either a cognitive subject or a purpose of execution. And when the methodology of consciousness becomes the drive or even the core motivation behind artists and their works, the model itself becomes autonomous, it constructs itself to be its own subject and purpose. In this perspective, the model has obtained self-sustainable value and life, and begun its own evolution. Via these artists’ works, this exhibition presents the method of the evolution of model, and the execution of art founded upon methodology will be more accurately observed. (Text/Bao Dong)

Bao Dong is an art critic and independent curator based in Beijing. He first became immersed in Chinese art scene in 2005, and ever since then he has widely published articles on Chinese contemporary art in many art magazines and anthologies as well as artist monographs. He is a consultant and contributor of LEAP magazine. He has curated exhibitions for a wide range of art organizations, including Ullens Center for Contemporary Art, Beijing; The Art Center of Chulalongkorn University, Bangkok; Times Museum, Guangdong; etc. He was awarded Asian Cultural Council (ACC) fellowship grant in 2014, and became a nominee of Independent Curators International’s 2014 Independent Vision Curatorial Award. In 2014, he initiated and co-founded the annual publication, Journal of Contemporary Chinese Art Studies.